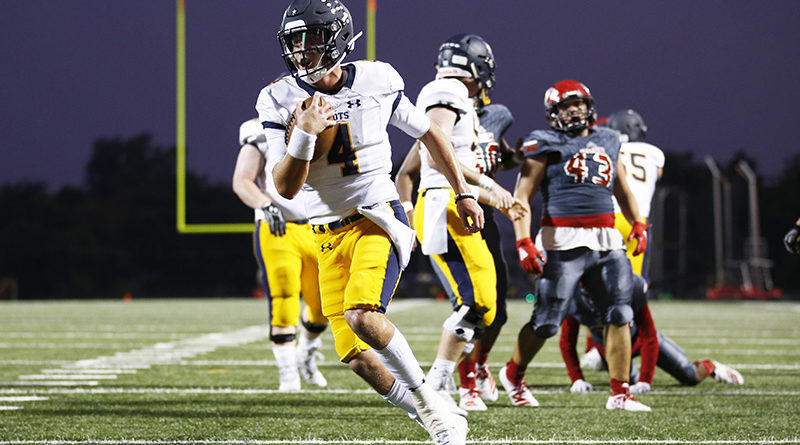 The recruiting odyssey of Chandler Morris ended with the Highland Park quarterback choosing one of the country’s top programs.

Morris signed with Oklahoma in late December, and unveiled that choice on national television on Jan. 2 in Orlando, Florida, before the kickoff of the Under Armour All-America Game, with his family and HP head coach Randy Allen at his side.

Morris originally committed to Arkansas, where he would have played for his father. But after Chad Morris was dismissed as the head coach of the Razorbacks in early November, Chandler re-opened his recruiting.

His father recently became the offensive coordinator at Auburn, but Morris didn’t follow, instead opting for a school that showed interest in him for quite some time. He also considered offers from TCU, Virginia Tech, USC, and others.

“There’s a list of coaches [my father] trusts that I could go play for, and coach Riley was one of them, and he was at the top of that list.” -Chandler Morris

Sooners head coach Lincoln Riley “kept a relationship with me the whole time in this recruiting process, and he’s a man of his word,” Morris told ESPN. “There’s a list of coaches [my father] trusts that I could go play for, and coach Riley was one of them, and he was at the top of that list.”

Morris leaves HP as one of the most decorated quarterbacks in program history, with more than 7,600 passing yards and 88 touchdowns in two years, along with 37 rushing scores. He led the Scots to an unbeaten season and a Class 5A Division I state championship as a junior when he was named the offensive MVP in the title game.

At Oklahoma, Morris will reunite with former HP receiver Finn Corwin, who was his favorite target during the 2018 season. Corwin was a freshman at OU this season. However, he will become a rival for ex-teammate Prince Dorbah, the standout defensive end who signed with Texas last month.

Led by senior Jalen Hurts, Oklahoma earned 12 victories, won the Big 12 crown, and reached the College Football Playoff semifinals this season before falling to LSU in the Peach Bowl.

After all the fanfare, Morris proceeded to complete six of 12 passes for 77 yards in the all-star game, which featured senior standouts from around the country.

The Park Cities: Philanthropic, to a Point