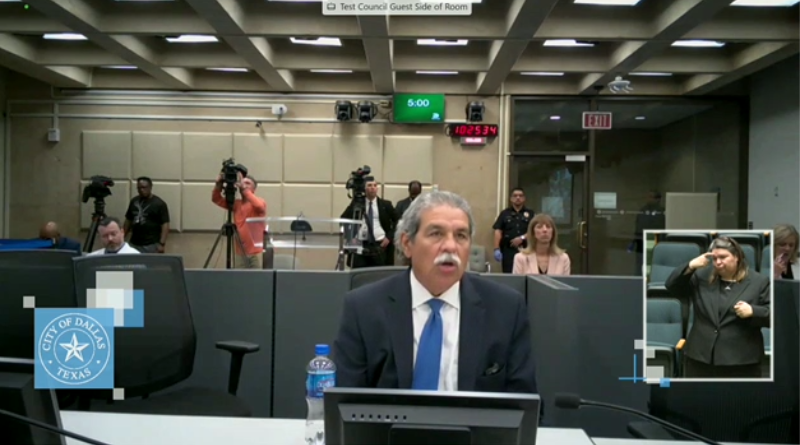 With its first post-closure school board meeting not slated until March 26, the update Dallas ISD superintendent Michael Hinojosa gave the Dallas city council a little more clarity as to how the district is going to manage the herculean task of suddenly pivoting to online instruction.

“This has been traumatic for everyone involved,” Hinojosa told the council, who met remotely over video conference Wednesday. “It does not look like we will have school again anytime in the near future, but we will reassess that every three weeks.”

Pending board approval, the district’s hourly and salaried employees will continue to get their normal paychecks, Hinojosa said in his update.

“We will make them whole,” he said. “We are in this situation because of no fault of any of our employees.”

Among the immediate concerns? Feeding students that rely on the district for at least one (sometimes more) meal a day during the week, and making sure every student can access online instruction and assignments.

To that end, Hinojosa said that the district will open neighborhood secondary schools twice a week from 10 a.m. to 1 p.m. so students can pick up three days worth of “grab and go” lunches and assignments. Schools include Hillcrest, W.T. White, and North Dallas high schools; and Franklin, Marsh, Walker, and Medrano middle schools. Elementary school students will also be able to pick up new lessons at those schools as well.

Three days of breakfast and lunch will be distributed on Monday and Thursday from 10 a.m.-1 p.m. at the entrance of the schools. The students need to accompany the parents to be eligible to pick up the meals. All students qualify for the meals. At most locations, families can pick up the meals from their cars.

Hinojosa said the district estimates that 40 percent of its students do not have access to the Internet at home. The district had provided 1:1 laptops to nearly every secondary student before spring break in case the district did have to close – but knew even then that some students would not have Internet access.

Dallas ISD is considering putting hot spots on buses and parking them in the community, Hinojosa said, but the district may need Dallas police assistance on securing them regularly.

The Dallas Education Foundation has been tasked with helping secure hotspots for students, but the superintendent added that the whole remote learning journey was new for the district on this scale.

“We’re all in uncharted territory,” he said. Teachers will be expected to make contact with each of their students at least once a week – possibly more. Counselors will be made available on a case-by-case basis.

As for graduation, Hinojosa said that the logistics were still up in the air as the district first tries to map out instruction and other more pressing issues. He did stress that no student would be penalized, and that the district would do everything it could to help seniors “get to the finish line.”

“We will have ceremonies, we’re just not sure when,” he said of commencement.

One thought on “‘Traumatic For Everyone’: DISD Readies for Online Learning”