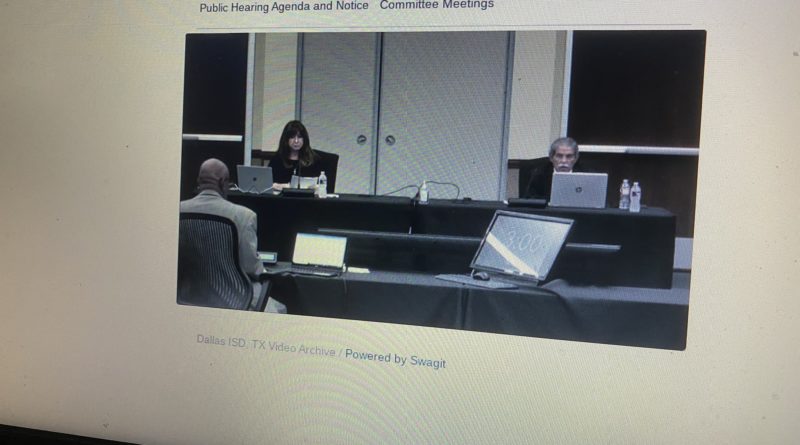 Compared to the snafu-ridden virtual meeting by the city of Dallas, the Dallas ISD virtual school board meeting Thursday was easy-peasy.

Deno Harris, the district’s executive director of board services, sat in a nearly empty room with superintendent Michael Hinojosa, chief of school leadership Stephanie Elizalde, and a few other district staff – all at a safe distance from one another. Harris called each person who signed up for public comment, and when they answered the phone, he informed them that the district was calling, and their three minutes was starting.

As each trustee spoke, the screen view switched to that trustee. Aside from needing to remind trustees occasionally to take their microphones off mute when it came time to vote – which was done by roll call – the technical aspects of the meeting went off with nary a hitch.

One of the longest discussions was about whether or not trustees needed training specifically on Robert’s Rules of Order, and how much of it they needed. Some balked at the training at all, and some balked at how often – twice a year – the original action item called for. In the end, it passed 8-1.

But the biggest chunk of the meeting was spent addressing issues related to the closure of schools due to the COVID-19 pandemic.

Dallas ISD chief technology officer Jack Kelanic briefed the board on what students needed to be able to participate in distance learning, but not before every single school board member praised him and his team for being able to quickly pivot the entire district to online learning in days.

Kelanic said the district had a short-term plan and a long-range plan for making sure that students had not only laptops and technology, but internet access.

The district conducted a telephone survey last week, and of the 18,0000 that responded, 30% indicated that they did not.

Because of that, Kelanic said the district was recommending purchasing 10,000 more mobile hotspots for students to use, to add to the 8,000 it already has and the 4,500 more that have been conditionally approved from the 1Million Project Foundation.  The Dallas Education Foundation also adopted the purchase of hotspots as a priority and received donor support for additional hotspots.

“This is a near term strategy to get us through the school year, and maybe into next year,” he said.

Long term, however, the district plans to try to work with other entities – like the city of Dallas – to improve the infrastructure in internet deserts in the city.

The hotspots will have filters to keep students from accessing things they shouldn’t, Kelanic told the board.

In the end, the board approved the purchase, which means Kelanic and his team can begin to make sure that every student without internet access has it.

But that wasn’t the only COVID-19 related decision the board made. It will also postpone its May trustee election until November, after Attorney General Ken Paxton gave the go-ahead for holding off on municipal elections to slow down the spread of the virus.

The board also passed a resolution to “pay employees at their regular hourly or daily rate of pay, according to the duty schedule they otherwise would have worked, during the time of normal operations of Dallas ISD.” The measure also includes long-term substitutes who had worked 11 or more consecutive days up to March 23. The emergency leave and pay will last throughout the extended school closure.

“During a districtwide Extended Emergency Leave while all staff will receive their normal compensation levels, some staff may be required to perform some limited duties remotely/work-from-home to maintain key functions of the district including but not limited to activities such as instruction, lesson development, curriculum development, staff supports and business office functions such as payroll,” the district said after the meeting.