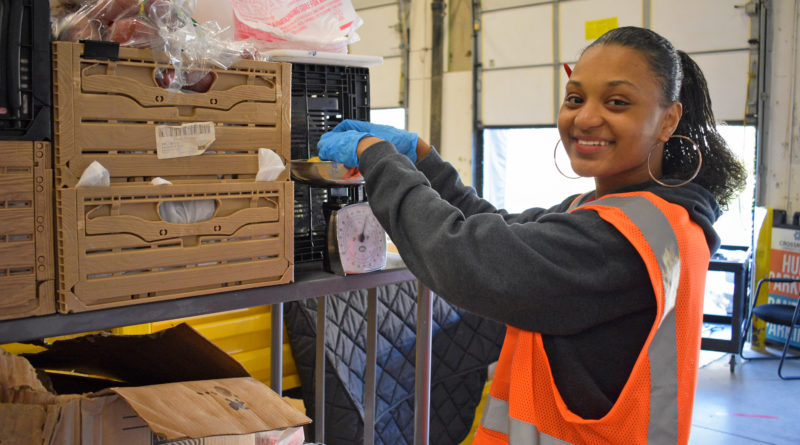 As unemployment numbers continue to rise, more businesses close, and parents are faced with children at home full-time, one organization is making sure many still have food to eat. 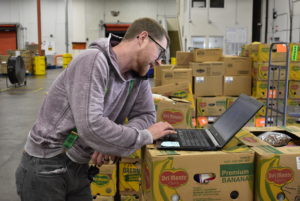 “On Wednesday, March 18, Crossroads broke our daily records of families and individuals served – 113 and 560 respectively,” he said. “We served 32 new families that day who are struggling due to COVID-19.

“I’m grateful for the dedicated volunteers and interns who continue to help us carry out our mission during this time of increased need.”

And that need is hitting a lot of new families, too, said development director Jana Shafer.

“We’ve seen an increase in demand – especially with families with school-age children and also just people out of work,” she said. “Their businesses have been closed, and they don’t have jobs anymore. We even had a professional athlete who plays for a local sports franchise who was laid off and has a wife and four children – and he didn’t have any way to get them food. He was at our pantry.”

“Normally people who wouldn’t qualify for food – maybe they were making $50,000 a year, but they lost their job – are suddenly finding themselves not knowing what to do,” agreed marketing coordinator Katie Jenkins.

But that ambitious effort is secondary to getting food to those who need it right now – and safely. Prior to the outbreak, clients would be led by volunteers through the process of choosing food from the shelves, with the amounts received determined by how many are in the household, their ages, and their activity levels. 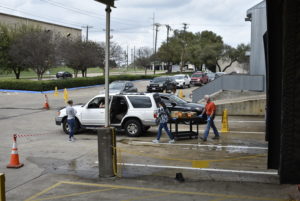 Now, prepackaged boxes are put directly into the trunks of the client’s cars in a drive-up line.

Thanks to the nonprofit’s partnership with the North Texas Food Bank, food supply isn’t as precarious (although financial support is always needed) as the volunteer supply is. Shafer said that since CCS serves at-risk populations, it is an essential business – which means it can still work with volunteers, and any volunteers who are working with CCS would be allowed to go to that site.

And the organization is taking a lot of precautions, too. For one, by having clients remain in their cars, the human contact is kept to a minimum.

“Volunteers are mostly packing boxes and also putting those boxes in clients’ cars, so there’s not really that same interaction that we normally have,” said Jenkins. “And all the while they are wearing gloves and the ones who are placing boxes in cars are wearing face masks and plastic aprons.”

There are also plenty of handwashing stations and hand sanitizer around the building, too, Jenkins said, and surfaces are wiped down frequently. Staff that is not needed at the site specifically are working from home, too.

“Normally we see a lot of volunteer groups, but lately there have been a lot of cancellations with those groups because their businesses are having them work from home,” Jenkins said. “So because of that, we’ve also lost a lot of hands that we were expecting.

“And a lot of our regular volunteers, they are older and as much as we love them, we definitely want them to stay home for their own safety,” she added. “It’s definitely been interesting because there have been a lot of adjustments that we’ve had to make.”

But CCS executive director Jay Cole said it’s actually also a great time for families to think about volunteering together, too.

“If for instance, we had 4,000 boxes put together where one person holds it, the other one puts tape on it, well, when you have two strangers can’t do that,” he said. “But when you have husband and wife or brother and sister, you can.

“I just talked about this with people from the city of Dallas and Dallas County about getting the word out that if families volunteer together, they can actually be very productive and helpful.”

Cole said that one church group even volunteered – within the recommended distance – together, as their Sunday worship.

The nonprofit’s additional safety measures include requiring all staff and volunteers to check their temperature before coming to the building, checking temperatures twice a day while there, and washing hands for 20 seconds upon entering the building.