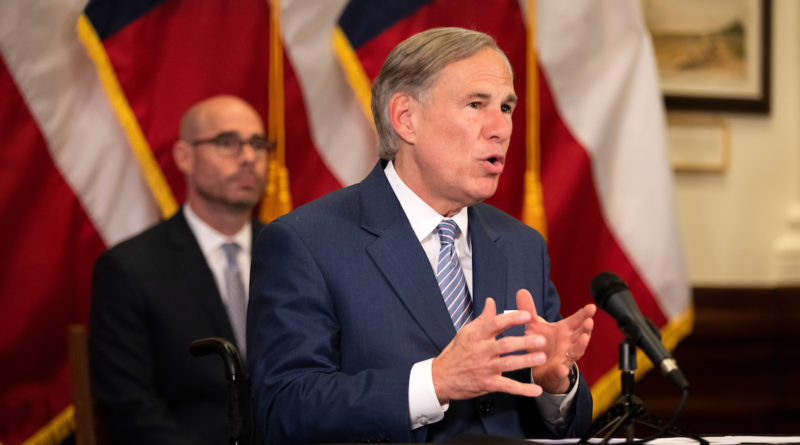 Shortly after Dallas County announced that it had its highest single-day report of cases – 124 – Gov. Greg Abbott held a press conference Friday to announce a gradual plan to reopen the state economy.

One order will allow select activities and services that don’t pose a big threat of spreading the novel coronavirus to reopen using a “retail-to-go” model, where customers can order items for pickup.

The governor also loosened restrictions on elective procedures a bit as well. State parks will reopen, but gatherings at them that are larger than five people are prohibited, and users must wear a mask and stay 6 feet from strangers. However, school buildings will remain shuttered for the rest of the year.

“Texans are battling a colossal challenge—an invisible enemy that has tested our lives and our livelihoods — but overcoming challenges is part of who we are as Texans,” said Abbott. “We have shown that Texas can continue our efforts to contain COVID-19 while also adopting safe standards that will allow us to begin the process of reopening Texas.”

The strike force will immediately begin providing input on potential additional openings of activities and services in Texas consistent with guidelines provided by the Centers for Disease Control and Prevention (CDC).

Abbott said he will announce a revised plan for the state based on these initial recommendations on April 27.

Abbott said that it appears that the social distancing and shelter-in-place orders local governments and the state enacted have helped to flatten the curve.

“We’re now beginning to see glimmers that the worst of COVID-19 may soon be behind us,” Abbott said. “We have demonstrated that we can corral the coronavirus.”

Abbott said Texas would be receiving a “dramatic increase” in testing — “not just testing those who may show symptoms, but also being able to test entire communities so that we have better information,” adding that the state could expect “massive amount of testing capability coming to Texas by late April or early May.”

Abbott stressed that any plan for reopening the economy would be governed by data and science.

“In opening Texas we must be guided by data and doctors,” he said. “We must put health hand safety first.”

He also acknowledged that loosening the reins a bit could come with some risk.

“There is a possibility of a resurgence of COVID-19,” Abbott said. “That’s one of the reasons why we will utilize enhanced testing strategies, enhanced containment strategies.”

Abbott said that if they see a resurgence in one pocket of industry, they could again restrict its operation.

Dallas County Judge Clay Jenkins believes there can be cooperation in both slowing the risk of infection and opening the economy.

“I believe we- local, state, and federal officials- can work together to protect public health and carefully open the economy.,” he said. “We must be fully committed to following the science so we minimize the risk of a second wave of COVID-19 that could force us backwards.

“We must listen to our constituents including those voices too often ignored but critical to this response. This includes among others: voices for workplace safety and fair treatment, communities of color who are bearing a disproportionate share of the pain of this pandemic and small business entrepreneurs who create half the jobs in Texas. “

Jenkins said that several of the things Abbott mentioned were already being discussed on the county level – specifically loosening restrictions on elective procedures and “retail-to-go.”

“Others, like opening movie theaters and restaurants are not businesses we contemplate being in the first group of businesses to be opened for in person experience.,” he said. “None of this means that on April 30, 2020, this will all be over.”

What it does mean, he said, is that the first group of businesses can reopen when testing and tracing of positive cases happens.

“After watching that first group to measure its effect on public health (probably two weeks) and if successful, open the next grouping,” he said.

But before all of that, the Dallas County Commissioners Court met (more on that from Matt Goodman at our sister publication, D Magazine), and voted to open craft stores, which could make it easier for those making cloth masks to get materials.

We asked Jenkins’ office how this would jibe with Abbott’s orders.

“Fabric/craft stores are now deemed essential under the Dallas County order, for the limited purpose to sell fabric for masks and school supplies. They can have in-person sales for these limited purposes starting today,” said Lauren Trimble, Jenkins chief of staff, Sunday.

“Starting Friday, these stores can sell all of their products via curbside, pickup, or delivery.”

On Saturday, Dallas County once again reported its highest number of new COVID-19 cases yet – 134 new cases, bringing the total case count to 2,324.

Five additional deaths were also reported, including a University Park woman in her 80s, a Dallas woman in her 70s, and a Grand Prairie man in his 80s. Two more Dallas men in their 70s also died. They were residents of long-term care facilities.

“Today’s five deaths bring our weekly fatalities to 33, which is the deadliest week so far and 55% of all COVID19 deaths in Dallas County,” said Jenkins. “Today’s number of new cases is the most we have ever reported. The second-highest number of new cases reported was yesterday.”

“This is why we must limit unnecessary trips, wear a cloth covering at essential business and continue making good personal responsibility decisions,” he added. “It is also why we must listen to public health officials as leaders contemplate loosening safety orders.” 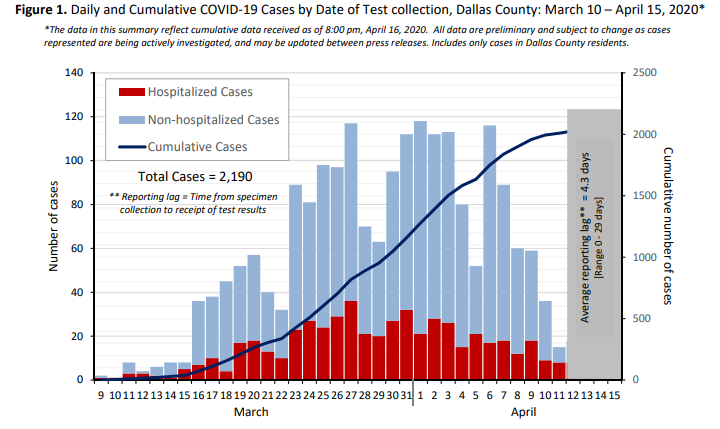 Despite cumulative cases increasing, hospitalizations continue to remain manageable by area hospitals, according to city and county data.

Twenty-five hospitals on Friday reported ventilator and bed capacity numbers to Dallas Mayor Eric Johnson’s office. Total beds occupied was 2,995 out of 5,710, with 519 intensive care beds out of 827 occupied. About 299 ventilators are being used out of 940.

Close contact continues to be the biggest risk factor for contracting COVID-19,  accounting for 82.5% of all cases. Living in a long-term care facility, domestic out-of-state travel, and international travel are a distant second, third, and fourth, at 7.2%, 5.1%, and 2.5%, respectively. However, cases contracted in jails have increased to the point of nearly tying for fourth at 2.1%.

Twenty-five percent of all cases end up hospitalized – 25% end up in critical care, and 20% end up on a ventilator, indicating the county’s first decline in number of hospitalizations and ICU admissions. 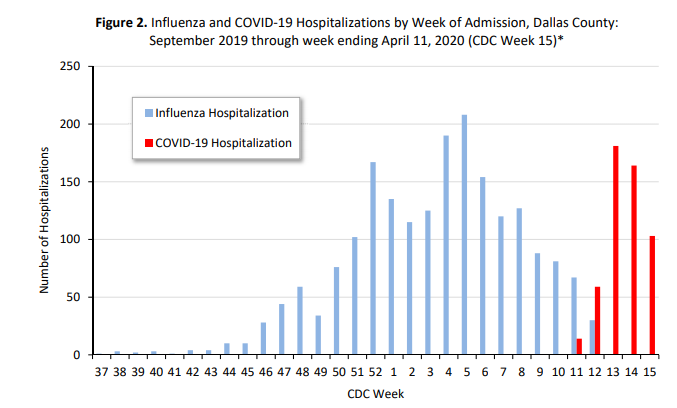 Of the 55 deaths the county had reported at the time of Friday’s aggregate count, 20 were residents of long-term care facilities. Only 24 percent of those deaths were people younger than 65.