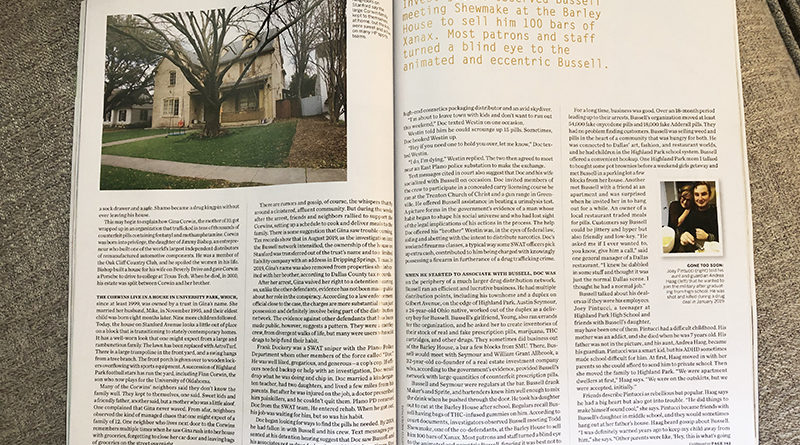 The tragic slaying of teenager Joey Pintucci intersects with “The Highland Park Drug Ring” in the April cover story for D Magazine, a sister publication of Preston Hollow People.

The article by Peter Simek isn’t about the former Highland Park High School student but rather, as one subhead says, about, “How an odd cast of characters – including a mother of 10 and a cop – ran a deadly drug ring out of a Highland Park townhome.”

Federal court documents accuse Gary Collin Bussell of leading the operation out of his townhome. Gina Corwin, of University Park, is the mother of 10. Frank Dockery belonged to the Plano Police Department. They were indicted along with eight others from Carrollton, Dallas, Garland, McKinney, and The Colony.

“They were a motley crew, from divergent walks of life, but many were users who sold drugs to help fund their habit,” according to D Magazine.

Most of the defendants, who were charged with seven counts of drug and weapons-related offenses, were expected to make plea deals with prosecutors, Simek said. Corwin pleaded guilty to possessing with intent to manufacture and distribute 50 grams or more of a mixture or substance containing a detectable amount of methamphetamine.

The magazine describes a Park Cities mom buying pot brownies, restaurants trading meals for pills, and an organization that sold tens of thousands of fake prescription pills. A Highland Park woman slept for 24 hours after taking what she thought was Xanex. It contained fentanyl, a powerful and deadly opioid often used in counterfeit versions of medicines such as oxycodone.

Pintucci’s entry into the story comes through his friendship with Bussell’s daughter.

The teens met in middle school and remained friends even after his aunt Andrea Haag moved him out of Highland Park High to Evolution Academy in Richardson in hopes of getting more help with his ADHD.

Haag became his guardian after Pintucci’s mother died when he was 7.

Bussell’s daughter was in Pintucci’s white 2002 Lincoln sedan the night the 18-year-old was gunned down. They were waiting in front of Dick’s Sporting Goods in an empty parking garage at the Shops at Park Lane, where he planned to sell THC canisters, used for vaping, to students from Evolution. THC, or tetrahydrocannabinol, is a compound in marijuana that gets users high.

Pintucci may have been dealing for Bussell, or Bussell’s daughter may have taken the canisters without permission, according to D Magazine.

Security video showed three men arriving at the garage on Jan. 24, 2019. They used guns to take the canisters without paying, and then one fired into the car, hitting Pintucci.