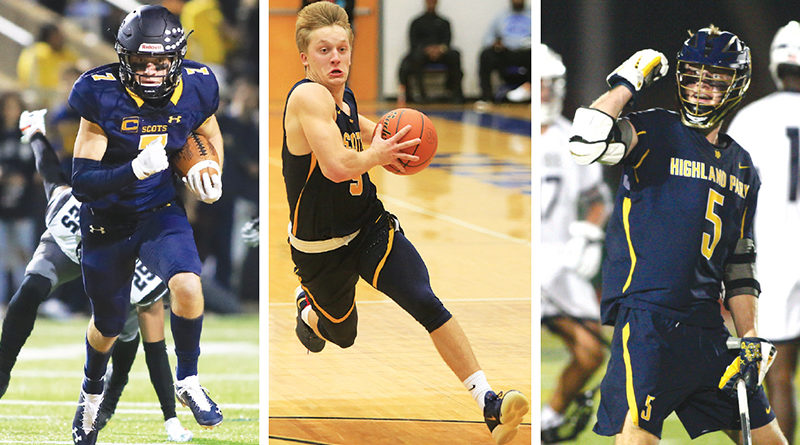 Highland Park High School has had a proud tradition of sports team leaders over the years, but Drew Scott stands out as the first Scot in school history to be elected captain of the football, basketball, and lacrosse teams.

After graduating this spring, he will take his talents to Ohio State University, where he has accepted a scholarship to play lacrosse.

“I will finally get the chance to spend all my time on one sport,” said the 6-foot-2, 185-pound athlete. “I’ve played lacrosse four months out of the year at Highland Park and will be competing with guys at Ohio State who have been playing the sport 12 months out of the year. So I’ll come in as an underdog, and that will fuel me.

“By playing lacrosse part-time here, I don’t know the limit to my ability, so I can’t wait.”

“I try to be the hardest worker and earn the trust of my teammates. When we go into battle together, they trust me, and I trust them.” -Drew Scott

In football this past season, he missed the first five games due to an injury, and when he finally got out on the field, he made up for lost time. He caught 32 passes for 780 yards and nine touchdowns, finishing as HP’s number two receiver.

He averaged 24 yards per catch. Had he been healthy all season, he would have put up Cade Saustad-like numbers. (Saustad, the Scots’ all-time leading receiver, now plays lacrosse at the University of Virginia as a starting defenseman. A freshman all-American and all NCAA-Tournament team member, he helped lead the Cavaliers to the national championship this past fall.)

In basketball this season, Scott averaged eight points per game. He and his fellow football and basketball captain, Prince Dorbah, have a special bond, after playing hoops with each other since their Texas Titans days in middle school. Dorbah has committed to play football at the University of Texas.

Scott plays midfield in lacrosse for the Scots. He’s looking forward to next year playing with former HP lacrosse standout Gabe Galbraith who is a freshman for the Buckeyes.

How does an athlete find himself captain of three major sports?

“My teammates know that I’m passionate,” said Scott. “I’m fortunate to lead, and I tend to lead by example. I try to be the hardest worker and earn the trust of my teammates. When we go into battle together, they trust me, and I trust them.”

The beginning of Scott’s discipline and leadership abilities trace back to his elementary school days when he took karate at Freddie Poole’s Martial Arts on Lovers Lane.

He earned his black belt at the age of 10, the youngest ever at that facility. His karate training sparked a discipline that he has maintained. And he is quick to point out how his parents – Brian and Kerri Scott – supported him and guided him in developing leadership skills.

“My parents, my coaches, and my teammates have been the best,” said Scott. “Highland Park has a tradition of core values, an unmatched culture, the best coaches in the state, and a community behind us in every sport.