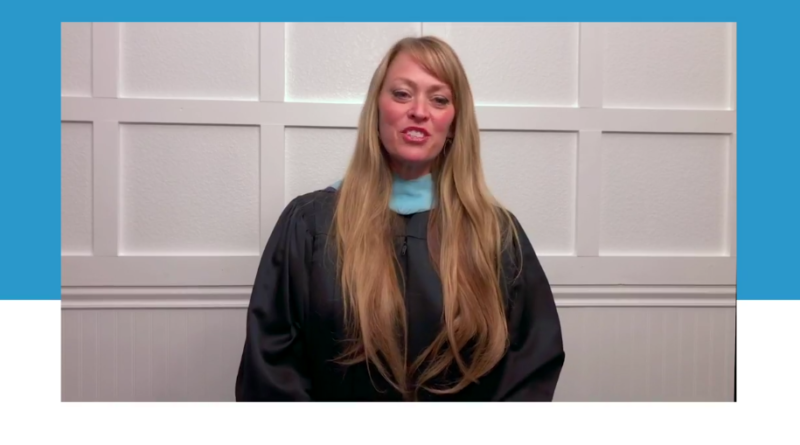 If ever there was a graduating class that earned a walk across the stage in person, it was the senior class of Thomas Jefferson High School, where first an October tornado not only uprooted many of their families, but damaged their school so badly that they were moved to a shuttered middle school.

Then COVID-19 hit and, just as the students at Thomas Jefferson were finally settling in, they were – like all students in Texas – sent home to learn for the rest of the year. And when county health officials advised that in-person graduation ceremonies would make it difficult to maintain social distancing measures, Thomas Jefferson seniors were dealt one further blow – their graduations (and every other senior class in Dallas ISD) would be virtual.

But, if ever there was a graduating class that could adapt on a dime, it is also the senior class of Thomas Jefferson High School, and that group of tenacious students graduated Wednesday night.

But everyone agreed – it wasn’t the same.

“Today is your day, although it looks and feels differently than what you expected and deserve. The entire community shares your disappointment at having to minimize this year’s celebrations,” Hinojosa said.

Principal Sandi Massey greeted viewers of the virtual ceremony and congratulated the senior class, acknowledging how many obstacles the class had to overcome in a year bookended by a tornado and a pandemic.

“While the world has caught up with us in tragedy, our life-changing year began well before COVID-19,” she said. “When we left school at the end of the day on Friday, October 18, not one of us could have imagined that we would never again walk the halls of TJ high school as we had done that day.”

The tornado tested students and teachers, she said, but both rose to the challenge, with students rallying for homecoming, teachers driving to check on students, and everyone moving into the previously shuttered Thomas Edison Middle School.

“When we left school at the end of the day on Friday, October 18, not one of us could have imagined that we would never again walk the halls of TJ high school as we had done that day.” – Sandi Massey

“You were trying to make the Edison become the new TJ,” she said. “Because you are amazingly resilient. You are incredible, determined students who, when COVID-19 hit, you took it in stride, as if you were already prepared for this new battle.

“Every painful event that’s hit us along the way has given us the opportunity to choose a path – either being the victim, or being a victor.”

Massey also pointed out that any discussion of the achievements of the class of 2020 must also include the parents, who made sure their students continued to attend, despite the adversity.

“You are graduating with the help and the determination of your parents, and community support, and TJ high school staff. You are our one true love,” she said, adding that this class will “literally go down in history.”

Salutatorian Liliana Romero and valedictorian Giovanna Lozano may not have been able to give their speeches in front of their classmates, but both took the time to reassure, congratulate, and inform in their speeches prior to Massey, Hinojosa, and school board trustee Edwin Flores confirming the class had graduated.

Every graduate’s name was also read aloud while their senior photo and a little bit of biographical information appeared on the screen.

“Just as we were getting used to this new identity as a senior, COVID-19 hit and turned our most exciting moments into social distancing and quarantine,” Lozano said.

“I know the world would want me to speak on the things we are dealing with today, or on the memories we have created together as a class – we worked hard, we deserved a better ending,” Romero acknowledged, adding that feelings of anger and sadness about not getting a traditional graduation were valid.

Both Romero and Lozano took the opportunity to talk about mental health, and stressed the importance of seeking help instead of ignoring problems.

“I became so afraid to seek help and kept everything bottled up inside,” Romero said, adding that it can be difficult to admit you need help.

“Perhaps, like me, you’ve been told to ‘stop thinking’ and ‘suck it up’ more times than I can count,” Lozano said. “I bottled up any anxiety I felt to the point that I was diagnosed with clinical depression.

“I was conditioned to believe that getting help should never be an option.”

But both also said that the trials they and their classmates dealt with this year were life lessons that they could take with them and use.

“Life will throw endless obstacles at you, it will push you to your limit, but never forget that you are worthy of more than you tell yourself you are,” Romero told her classmates.