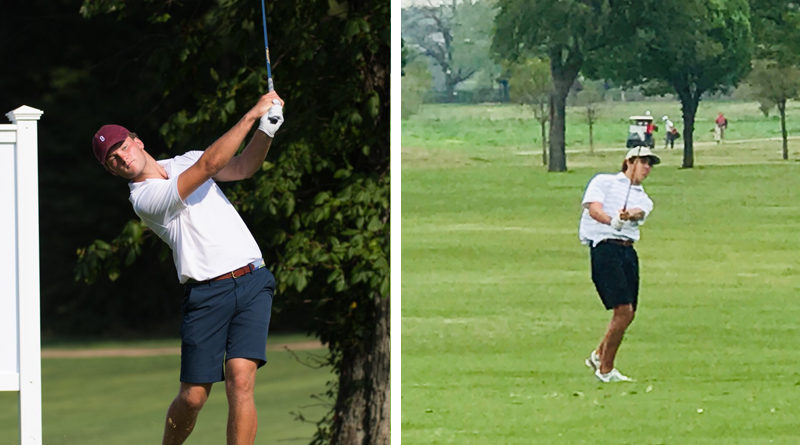 Scott Roden realized at a very young age that he wanted to follow in the footsteps of the boy next door.

When that neighbor is Cody Gribble, who won a national golf championship at the University of Texas and later an event on the PGA Tour, you don’t mind traveling the same path to success.

Roden grew up learning to swing Gribble’s clubs in the front yard. But since Gribble is left-handed, his otherwise right-handed protégé followed suit.

“His clubs were the only clubs I had to swing, so I just started playing that way,” Roden said.

Roden watched Gribble play a handful of college tournaments, including nationals in 2012, after which Gribble briefly had the trophy at his house.

“I knew that was what I wanted,” Roden said. “That motivated me and made me feel that was a path where I could re-create some of those achievements.”

Roden verbally committed to the Longhorns when he was only 13. He was homeschooling at the time while traveling and playing national junior tournaments.

He enrolled early at UT after getting his diploma in December. His decorated career with the Scots included a Class 5A individual state title as a freshman and three team championships.

In the fall, Roden will be roommates with Fojtasek, who transferred to HP before his senior year. He played for St. Mark’s as a freshman and spent the last two years at a golf academy in Virginia to grow his game with an eye on the next level.

“I felt like the next step would be to put myself in a team environment and be the best leader I could,” Fojtasek said of his time at HP. “It gave me a really great opportunity to learn a lot from the other guys.”

Fojtasek missed several fall tournaments due to a lingering back injury but was able to play a few events in January and February with the Scots. Due to the COVID-19 pandemic, however, the team missed its chance to defend the team championship this spring.

Still, Fojtasek hopes to play some prominent youth tournaments this summer before heading to Austin.

“It was unfortunate that we didn’t get to finish this year, but I took it as a stepping stone for my career,” he said. “I’ve always aspired to one day be on the PGA Tour.”

Hipps Doubles Up on Lacrosse Titles at Duke