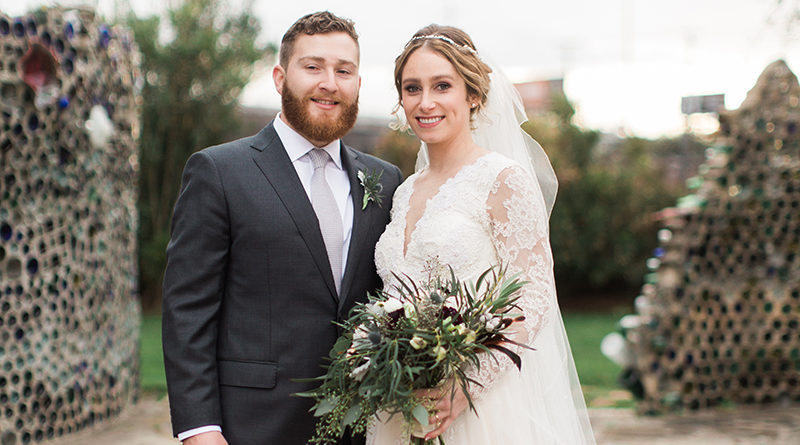 The groom is the son of Dr. and Mrs. John Francis Bagnasco of Waco, Texas. He is the grandson of Mrs. Chester Boutwell Griffin and the late Mr. Chester B. Griffin of Fort Pierce, Florida, and Dr. and Mrs. Francis Martin Bagnasco of Long Island, New York.

Caroline was presented in marriage by her parents and escorted down the aisle by her father. For her wedding dress, she chose an heirloom gown, which was first worn by her maternal aunt in 1982. Her mother wore the gown at her wedding in 1984. The dress was stored for many years until the next generation was old enough to marry. Caroline’s sisters each had the gown restyled to fit their personality by Patti Flowers Design Studio for their weddings in 2014 and 2016. Patti Flowers Design Studio once again updated the dress for Caroline.

The original scalloped paneled skirt of silk English net and Schiffli lace was accented throughout with Alencon lace and delicate clusters of seed pearls falling from a natural waist to slipper length. Accents of beaded Alencon lace swept from gentle gathers to a chapel-length train in scalloped panels of lace.

Caroline wore the original veil of ivory silk illusion worn by her mother and her sisters. The delicate scallop-edged design was adorned with clusters of seed pearls and cascaded down past the length of her train.

For the tradition of “something blue,” each bride’s initials and the date they married is monogrammed in light blue on the inside of the gown.

Bonnie, the groom’s dog of 6 years, celebrated the evening wearing a beautiful collar of eucalyptus and baby’s breath tied with a navy satin ribbon created by The Garden Gate.

Dylan is a 2011 graduate of Reicher Catholic High School in Waco, Texas. He received a Bachelor of Arts degree in Anthropology and a Bachelor of Science degree in Biology from Texas Christian University in 2015 and a Masters of Landscape Architecture degree from the University of Tennessee in 2018. Dylan was awarded the Chancellors Fellowship 2016-2018 and the Hawkins Partners Award for Professional Design Promise 2018 while at the University of Tennessee. He is a designer for Design Workshop, a national landscape architecture and planning firm.

After a wedding trip to Costa Rica, the newlyweds now reside in Austin, Texas.