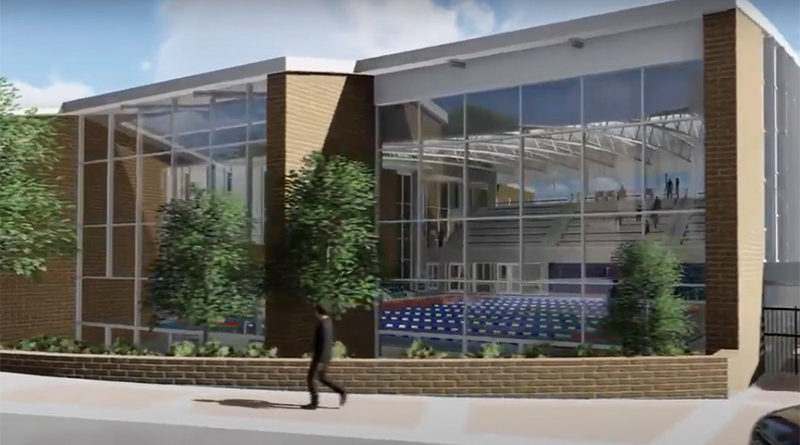 Jesuit’s rich tradition in swimming dates back almost a half-century, but one thing it’s never had is an on-campus pool of its own.

That will change next year when construction is scheduled to finish on a standalone natatorium adjacent to Jesuit College Preparatory School of Dallas athletic tower. The project became a reality after the largest donation in school history. The source has remained anonymous thus far but will likely be formally recognized at a later date.

“So many different things have had to come together,” said Jesuit trustee Alex Soich. “We’re really hoping to utilize this space in ways that will benefit the entire school.”

When it opens in early 2021, the 29,000-square-foot facility will house Jesuit’s swimming and water polo teams. It also will aid in training and physical rehab for athletes in all sports. Academic benefits will range from scuba and lifeguard certification to marine biology.

The state-of-the-art venue includes an eight-lane competition pool with fully automated timing and scoring systems as well as a four-lane warmup pool with separate climate and pool water controls.

“We control our own destiny when we want to get in the water.” -Doug Moyse

“It puts us on a different level. It’s a game-changer,” said Jesuit swimming coach Doug Moyse. “All these other teams have to share pool time with each other. This is our pool. It’s incredible what it allows us to do.”

Among other amenities, the natatorium will feature two one-meter springboards for diving, full-sized locker rooms, a climate-controlled gallery with chair-back seating for about 250 spectators, and a high-tech video board.

Due to city zoning regulations, the pool won’t be available for public use — only those sponsored by Jesuit, including practice time for other area private schools.

Over the past two years, the Rangers have practiced at eight different pools, each of which is shared with other programs or uses. Their primary home was Loos Natatorium in Addison, which is almost 50 years old and suffers from maintenance issues.

Jesuit will be able to host meets on campus for the first time, as will the school’s upstart water polo program. Moyse said that’s an advantage both physically and psychologically.

“We control our own destiny when we want to get in the water,” Moyse said. “If it’s closed, it’s our fault, and that’s great.”