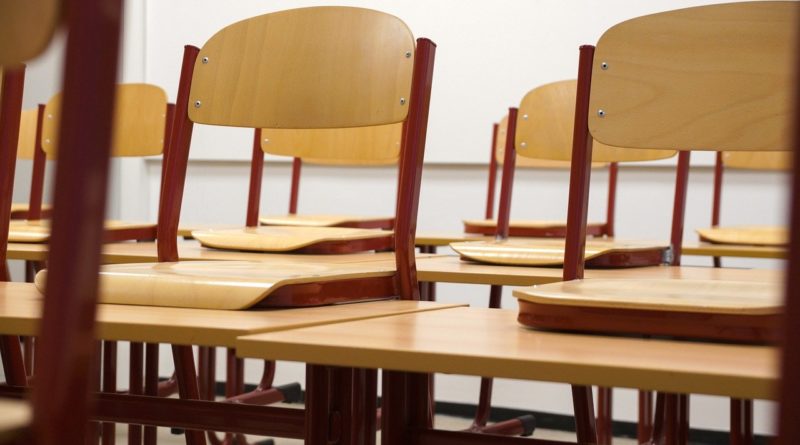 UPDATED to include reaction from Dallas ISD school board trustee Dustin Marshall, and the teachers union Texas AFT, as well as a new start date for Dallas ISD district employees to return to work in person.

Get ready to buy those school supplies and three-packs of tissue. Gov. Greg Abbott says students will be returning to public school this fall.

The announcement comes on the heels of record-breaking new daily case counts of the novel coronavirus, and as Dallas County hit more than 400 new cases in one day Thursday, with hospitalizations climbing.

In a call Thursday with lawmakers, Abbott said that school districts will be able to offer alternatives for students. The Texas Education Agency later said it would release guidance next Tuesday.

Abbott’s statements to legislators echos what he said to media on Monday.

“I will tell you that my goal is to see students back in classrooms in seats interacting personally with teachers as well as other students,” he told a Lubbock TV station. “This is a very important environmental setting for both the students, for the teachers, and for the parents.”

The TEA, however, is insistent that it will be safe.

“It will be safe for Texas public school students, teachers, and staff to return to school campuses for in-person instruction this fall. But there will also be flexibility for families with health concerns so that their children can be educated remotely, if the parent so chooses,” said TEA Commissioner Mike Morath.

TEA spokesperson Frank Ward told the Texas Tribune that the state would not be requiring students to be tested prior to reporting for the first day of school, nor would the state require students to wear face masks.

However, he later told the Dallas Morning News that aside from providing guidance on how districts should proceed with health protocols, there will be a lot of decisions left to local districts and health authorities.

“There’s an emphasis on local control,” Ward told the News.

“I’m pleased to see that the Governor and the TEA Commissioner are giving local control to the 1,100+ school districts in the State of Texas,” he said. “The virus has impacted them each differently, and each district should make the best decision for their own students prioritizing student safety above all else.

“In Dallas, we absolutely want to work towards in-person instruction to maximize the learning of our students, but we have to recognize that Dallas ISD has been hit much harder by the virus than most school districts in Texas.  Depending on the situation in two months, it may not be fully accurate in Dallas to assume that ‘it will be safe for…students, teachers, and staff to return to school campuses for in-person instruction this fall,'” Marshall continued. “I expect Superintendent Hinojosa to make his decision next week about how school operates in the Fall based on the best information available at that time, but it is my hope and we give parents a choice between in person instruction and robust virtual options.

“And it is critical that we have safety protocols in place (far in excess of those in most rural districts) for those students who do return to our school buildings.”

Dallas ISD has been examining how students would return to school for several months now, and took up the topic at its most recent board briefing.

Among the items outlined in the district’s plan for return was the use of masks, plexiglass dividers, one-way hallways, regular temperature checks, and measures to keep children six feet apart, including signage. You can see the full presentation here.

The district also has plans for students to return as normal (albeit with stricter standards for sanitation and social distancing), and hybrid plans that could have some students attending fewer days each week. 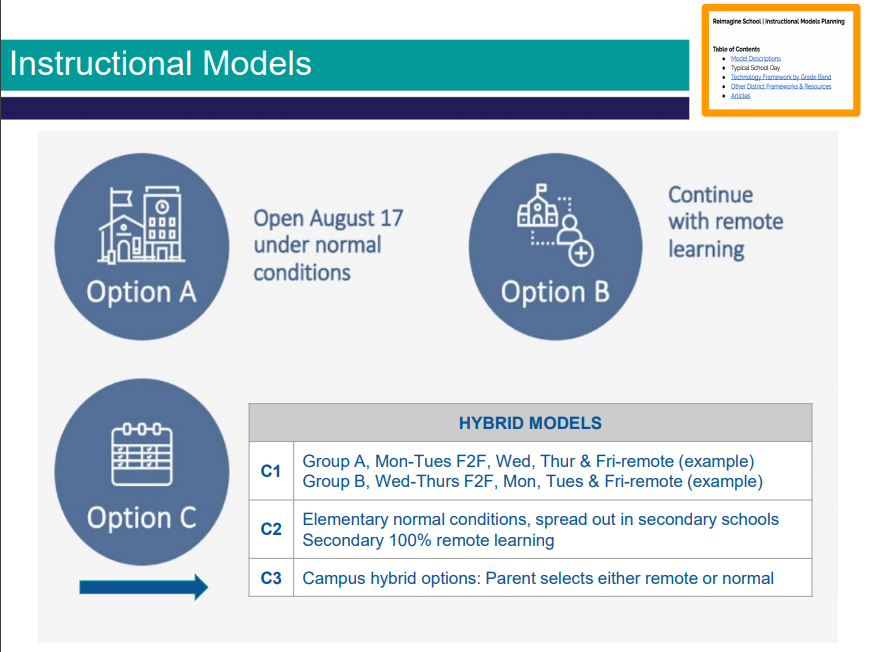 After the governor’s statements this week, the district said it would continue to draft plans and talk to teachers and parents.

“Dallas ISD continues to draft plans for the opening of the 2020-21 school year. However, we are awaiting guidance from the Texas Education Agency commissioner so that we can modify those plans appropriately. In addition, we are currently surveying teachers and families about options under consideration at this time,” said district spokesperson Robyn Harris.  “We are committed to keeping our students, staff and parents informed and will communicate information as soon as it becomes available. We appreciate everyone’s support and understanding as we seek to provide a safe learning environment for everyone.”

Thursday afternoon, the district also said that employees that were due to return to work in-person on July 6 should now report on August 3.

“After consideration of the latest COVID-19 data and the rising number of cases in Dallas County and in the district, district employees will be expected to report to work in-person on Monday, August 3, instead of the original date of July 6,” the district said. “The district will continue to monitor the situation and provide additional guidance.”

When staff does return, they will be screened upon arrive, and the district is strongly encouraging the use of face masks, as well as practicing social distancing in common areas like lobbies, conference rooms, and break rooms. Frequent hand washing is also part of the plan, and masks, gloves, hand sanitizer, and disinfecting wipes will be available at all district sites.

Highland Park ISD held a series of town halls for parents earlier this month, and has set up a website to keep families informed of how the new school year will look.

“Planning is continuing for school to be back in session this fall,” the district said in a statement “A committee made up of HPISD staff members and trustees has held three meetings so far with more scheduled throughout the summer. The committee’s charge is to recommend the optimum strategy for re-opening HPISD schools in the fall of 2020.

“The Commissioner’s statement says there will, however, be flexibility for parents to choose for their children to be educated remotely should they have any health concerns.”

This week, Fort Worth ISD announced it would offer in-person and distance learning options next fall. Dallas ISD school board trustee Dustin Marshall shared a story about that Wednesday on Facebook, and said, “It’s looking like Dallas ISD will likely pursue a similar path. We are still waiting for guidance from the TEA – which has now been delayed until next week – before the Administration will make a final decision.”

Comments from parents seemed to indicate that they’d like to see a better online offering than the hurried one put together at the height of the pandemic, but also seemed in favor of letting parents decide the level of comfort they had with sending a child to school.

Many families are worried about the spread that could happen at schools if they reopened during a second wave of the virus. One national survey found that around two-thirds of those polled were supportive of keeping kids out of in-person learning until the risk was substantially lower.

“Texas AFT says a big ‘Hell No’ to what looks like a return to normal in August. We are not in normal times. We won’t sacrifice our members and students for politics. Mike Morath’s comments do not inspire confidence for students, parents, and teachers who would be returning to campuses,” said Texas AFT President Zeph Capo. “While we welcome the idea of flexibility for remote instruction for children of families with health concerns, consideration needs to be given to educators and other school employees. They need confidence that their concerns have been addressed and that their safety is top priority.

“Leadership means assuring confidence, and that is what we are looking for from Mike Morath.”

Also at play is school funding. Federal stimulus dollars were available for the state to fund school districts during the pandemic school closures, as long as they offered some kind of distance learning. State officials haven’t said whether they would continue to fund this for families who are wary of sending their children to school this fall.

On the federal level, U.S. Rep. Jim Banks of Indiana and U.S. Rep. Tom Tiffany of Wisconson have filed the “Reopen Our Schools Act,” which puts federal funding in jeopardy if schools don’t reopen, with a stated purpose of prohibiting “the Secretary of Education from providing funding to certain educational institutions unless the institutions return to in-person instruction, and for other purposes.”

So far, the bill has meager-to-no support, however.