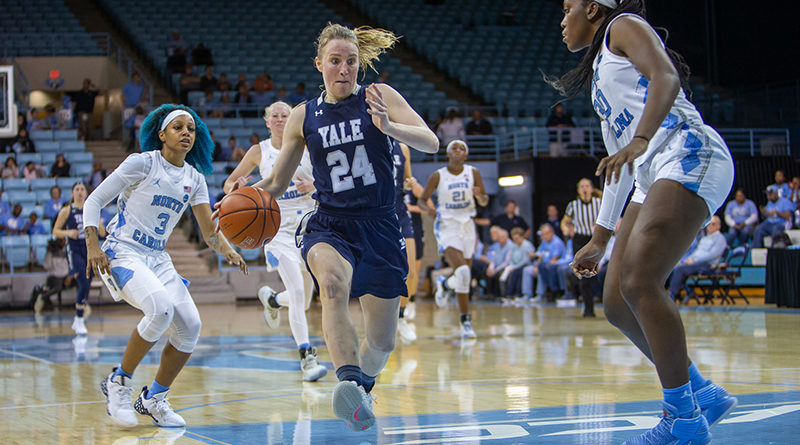 Just one victory away from making history, the Yale women’s basketball season was cut short by the COVID-19 pandemic.

Ellen Margaret Andrews could dwell on the what-ifs after the Bulldogs tied the school record with 19 wins this year. But instead, the Park Cities native reflects fondly on her junior campaign, which saw her average career highs in points (12.3 per game) and rebounds (4.2), while finishing fifth in the Ivy League in steals.

Her efforts earned the former Greenhill standout the team’s Bulldog Award for her toughness. Next season, she will be a team captain.

“It was a really great season overall,” Andrews said. “We were disappointed that we weren’t able to get a spot in the NCAA tournament.”

The resilient Andrews bounced back after a severe knee injury during a November 2018 game at Cincinnati forced her to miss the final 24 games of her sophomore season.

“Over the past three years, that foundation of team chemistry and a desire to work hard has provided that jumping-off point to thrive and get better.” Ellen Margaret Andrews

“I was still there for every practice and every game,” she said. “It was physically challenging, but I didn’t feel like an outsider. I felt so supported. It made me a lot hungrier.”

That sisterhood with her teammates and coaches drew Andrews to Yale in the first place. Plus, her grandfather David Sears played basketball for the Bulldogs in the 1950s.

“Yale didn’t have the same reputation basketball- wise as other schools I was looking at,” said Andrews, a history major. “It was more about the team and the coaching staff and how happy I would be. Over the past three years, that foundation of team chemistry and a desire to work hard has provided that jumping-off point to thrive and get better. It’s been really exciting.

“Even if we weren’t winning, I wouldn’t have regretted my decision at all. My teammates are some of my best friends, and it’s really allowed me to grow as a person.”

The versatile Andrews started her first career game early in her freshman year, in front of family and friends during an upset win at TCU.

But perhaps her biggest highlight came in December 2019, when she tallied a career- best 24 points as Yale scored a stunning 66-63 win at North Carolina.

“We were playing in the stadium Michael Jordan played in. We had nothing to lose,” Andrews said. “When I don’t feel as much pressure, sometimes I play better. It was an awesome experience.”