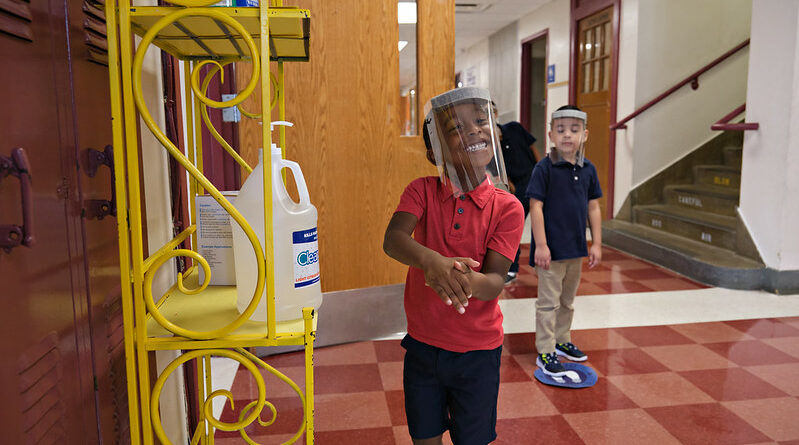 Dallas ISD outlined its plan for the return of on-campus instruction Tuesday - but not all of it. PHOTOS: Dallas ISD
Coronavirus Preston Hollow Schools
July 22, 2020July 28, 2020 Bethany Erickson 0 Comments

Dallas ISD released its reentry plan and new website Tuesday afternoon, but many parents are still asking a lot of questions.

The Education Evolution website, the district announced, is designed to provide parents with information rapidly. So far, it explains some of the procedures and plans for on-campus learning, but there is very little about distance learning – other than that it will be offered.

What we do know is this (and we’ll jump into the district’s campus plans in a minute):

Now, for what school will look like on campus. In a story published Tuesday, Dallas ISD superintendent Michael Hinojosa told the Dallas Morning News editorial board that if the pandemic was trending appropriately, he really wants to start school on campuses on Sept. 8.

“We prefer to have in-person learning,” Hinojosa said. “We haven’t seen our kids since early March. And our families, they have a lot of need to be with their teachers and their counselors. We’ve hired 57 mental health specialists to help with our students. So, we’d prefer to have it in-person. But we’re laying out the worst-case scenario, in case this thing doesn’t get under control.”

Last week, Dallas ISD assistant superintendent of learning Leslie Stephens provided a little more information in an interview with NBC DFW, saying that teachers would be teaching students online and in the classroom at the same time.

“When the kids come in face-to-face, they’re still using that same learning management system that the student at home is using. Everyone is going to do the same lesson,” Stephens said. “The teacher is going to do an explanation and get students working on independent work and then have the kids come in on ZOOM and then do an explanation for those students that need it.”

Hinojosa told the News that he believes that the district will be staffed appropriately for the 50 to 60% of students who parents indicated would return in a survey. He also said that teachers would be teaching distance learning from campus, not home.

“We think we have better control, a better environment, and then we’re more organized even if they’re teaching remotely but teaching from our building” Hinojosa said.

Among the measures put in place for on-campus instruction are:

You can see a video of the daily routine and the safety measures here.

All four board members said the district would need to be able to offer flexibility to parents, students, and staff during the year – infectious disease experts have warned, for instance, that even after flattening the curve occasional spikes could occur, and the district has prepared for the potential that it might need to shift to all distance learning at any point in the school year.

Also discussed was the need to make sure that students’ emotional and mental health needs were met, and that everyone had access to technology needed to move distance learning forward.

The trustees also said that they were also hoping for more clarity by Thursday night, including whether schedules would be different for different grade levels, and what magnet school and montessori school offerings would look like on the digital landscape.

But Henry also said that as a Dallas ISD parent himself, he was keenly aware of the struggles parents are going through, too – and of the ramifications of the board and district’s decisions.

“One of the sobering moments is that one of the trustees said some kids are going to get sick and even die. This is why we need to have these protocols; we have to operate with the mindset that this is going to happen … that’s the reality we have to operate in,” he said. “There’s the safety of the teacher, students, and staff and then there’s the education side. It’s really tough to balance the immediate safety of something bad happening to a student or their family and then there’s the damage done to a 3 year old who can’t go to school for two years who’s already behind.

“I’m not going to sugarcoat it and I can’t guarantee a student won’t get sick or die.”

Are you sending your child to school on campus, or are you opting for distance learning? Our sister publication, D Magazine, is conducting a poll – so head over to take it.