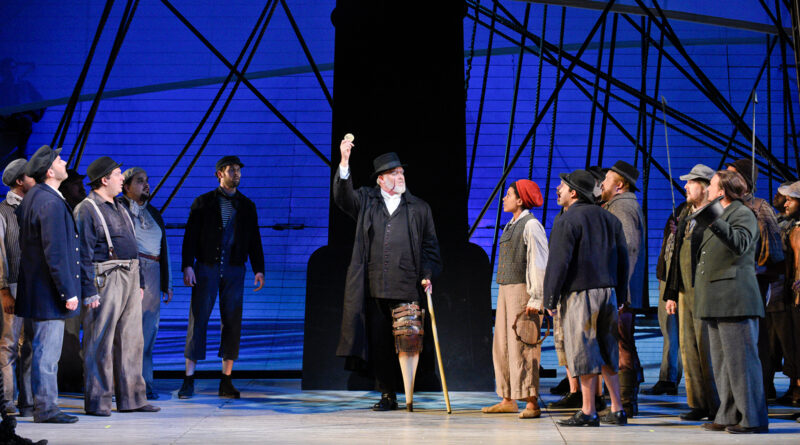 Terrence McNally, the legendary American playwright, screenwriter, and librettist will posthumously receive The Dallas Opera’s most prestigious honor, “The Maria Callas Award,” in recognition of his contribution to two landmark events in the company’s history: McNally wrote the libretto for Jake Heggie’s Great Scott, which received its world premiere at TDO in 2015; and he was a major creative force behind the creation of Heggie and Gene Scheer’s Moby-Dick, which had its world premiere on the Margot and Bill Winspear Opera House stage in 2010.

Ian Derrer, The Dallas Opera’s Kern Wildenthal general director and CEO, said that McNally’s long-term impact on the company had been extraordinary, thus honoring the literary lion with TDO’s most important award was particularly fitting.

“Terrence McNally’s libretto for Great Scott was dazzling in its scope and ambition, yet filled with the warmth and humanity that characterized so many of his best works,” he said. “It was truly our privilege to bring this ‘operatic love letter’ to life.

“And Mr. McNally’s imprint on The Dallas Opera began even earlier,” Derrer explained. “There is no doubt that the 2010 world premiere of Moby-Dick, which so magnificently concluded The Dallas Opera’s inaugural season in the Margot and Bill Winspear Opera House, was a game-changer for the company. We have Terrence to thank for the inspiration.”

“Simply put, Terrence McNally was a brilliant artist who loved opera nearly as much as the opera world loved him,” Derrer said.

Over the course of a career spanning six decades, Terrence McNally’s prolific output included opera librettos, ten books for musicals, over 37 plays, and a variety of screenplays for film and television. He was the recipient of five Tony Awards, and he also won an Emmy and several Obie and Drama Desk awards. In addition to the 2019 Tony Award for Lifetime Achievement, his other honors include the Dramatists Guild Lifetime Achievement Award (2011) and the Lucille Lortel Lifetime Achievement Award (2015). He received honorary degrees from the Juilliard School and NYU. One of his most important honors was conferred in 2018, when McNally was inducted into the American Academy of Arts and Letters.

Between his early life in St. Petersburg, Florida and his successes on-and-off Broadway, McNally attended high school in Corpus Christi, Texas, where an English teacher encouraged his love of Shakespeare and language. McNally scored his first commercial success with Next in 1969, which was directed by Elaine May and starred a then-unknown James Coco. This was followed by plays and musicals including The Ritz (1975), Frankie and Johnnie in the Claire de Lune (1987), The Lisbon Traviata (1989), and Lips Together, Teeth Apart (1991), culminating in a string of critically acclaimed Tony Award winners: Kiss of the Spider Woman (1993), Love! Valour! Compassion! (1994), Master Class (1995), and Ragtime (1997).

In 1997, at the suggestion of Lotfi Mansouri, general director at San Francisco Opera, Terrence McNally teamed up with a newcomer—composer Jake Heggie—to bring Sister Helen Prejean’s searing 1993 memoir “Dead Man Walking” to the opera stage. Two decades after its premiere, this work remains the most frequently produced American opera of the 21st century.

“When the Dallas Opera called in 2005 about a big, bold new American opera to be a featured part of the opening season in the Winspear Opera House, it was Terrence’s idea to tackle Moby-Dick,” explained Heggie.

“I was overwhelmed and daunted at first, but I saw a twinkle in his eye—a fiery sparkle of possibility—and knew he had thought of a way. Due to health problems, Terrence wasn’t able to see the project through and the libretto was eventually written by Gene Scheer. So, when The Dallas Opera called again for a follow-up to Moby-Dick, it felt only right to go back to Terrence.

“This time, he wanted to explore something even more dangerous and daring: a comic opera based on an original story. Great Scott emerged as a moving, funny and challenging story of our time, posing big questions about life, art, culture, identity, passion and belonging. His work inspired a whole new kind of music from me,” Heggie writes. “We were able to give big, juicy roles to our super starry cast, and the audience roared, laughed and wept along with us. Great Scott was recorded live at The Dallas Opera and received a Grammy Nomination for Best New Classical Composition.”

Winners receive an etched-crystal plaque which bears the likeness of the company’s unofficial “Godmother”—iconic soprano Maria Callas—who inaugurated performances at TDO with a splendid concert of opera arias in 1957. It is especially fitting that this award should go to the author of the Tony Award-winning play Master Class in which Callas herself is the focus.

This year’s award plaque will be presented to Terrence McNally’s husband, Tom Kirdahy.