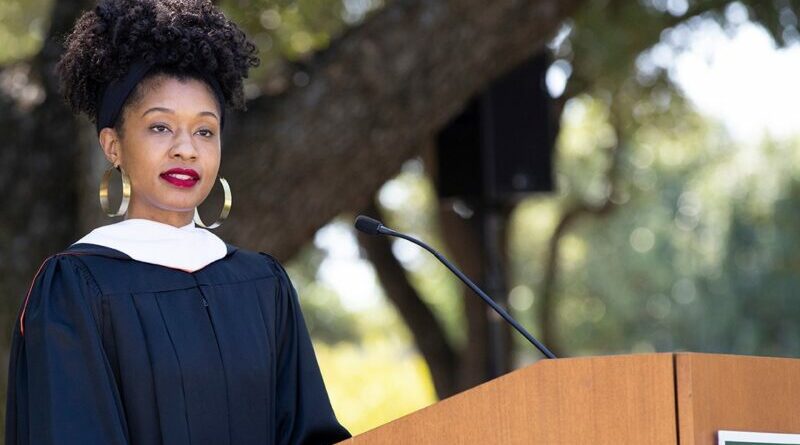 Tucker, a Hockaday graduate and president of her senior class, was selected and honored to address her classmates in 1999. COVID-19 had caused a postponement of this year’s ceremony, which had been scheduled for May.

“It was a privilege to be asked to be the commencement speaker and to be a part of this incredible tradition, particularly at this time in history,” Tucker said.

After graduating from Hockaday, Tucker attended Georgetown University, where she majored in International Business. Realizing her true passion for the arts, she transferred to the University of Southern California (USC). While pursuing an undergraduate degree in Communications with an emphasis on entertainment at USC, Tucker interned at several media organizations including Fox Broadcasting, Miramax Films, The Weinstein Company, and Dateline NBC.

Launching her career as a writer, Tucker received notable recognition when she won the sitcom division of Scriptapalooza, was one of seven comedy semi-finalists in the Austin Film Festival, one of six comedy finalists for the Warner Bros. Television Writers Workshop and was one of eight writers accepted into NBC’s Writers On the Verge program.

Her screenwriting debut came as a writer on Disney Channel’s Dog With A Blog. Later, she worked as a writers’ assistant on the Showtime series Black Monday, starring Don Cheadle and at Hartbeat Productions on a Kevin Hart project for Netflix. Her most recent endeavors are as a writer on comedian Jo Koy’s animated series This Functional Family and season two of HBO’s Emmy-nominated comedy A Black Lady Sketch Show, which is the first production featuring all Black, female writers.

A video of The Hockaday School 2020 Commencement event can be viewed at www.hockaday.org/106th-commencement.