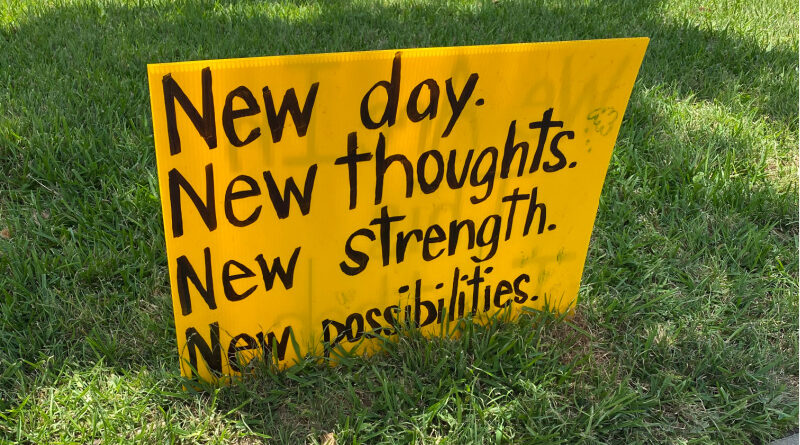 It was a warm June afternoon when I first noticed the signs that had bloomed along Tibbs Street in Preston Hollow.

In bright, sunny, yellow, messages like, “You are stronger than you think,” “We are in this together,” and “New Day. New Thoughts. New Strength. New Possibilities” lined the streets that are frequently populated by neighbors out on walks with friends – or their dogs.

I hopped out of my car, threw a mask on just in case, and snapped a few pictures, which I posted to the People Newspapers Instagram account, asking for help locating the sign makers.

Not long after, several neighbors reached out to tell me that they knew exactly who created the signs.

“I had posted on Next Door asking who had made the signs and Abby Goldstein of Preston Hollow North said that she and her kids had made them. Very sweet!” said Lisa Nelson.

Not long after Abby reached out to me, and not long after, another person noticed the signs– Dallas County Judge Clay Jenkins.

“Finished work early today and took a bike ride. Saw these signs. Dallas you lift me up. Keep lifting each other,” he tweeted.

It was August before I talked to Abby, Brian, Teva, and Sawyer Goldstein, though.

“We would drive into Pemberton and see all those homes that were just ravaged, and it was just so sad,” Abby said. “So it started out, ‘Let’s do everybody on Pemberton’–just give them a little bit of hope, you know, that they’re back in this neighborhood and we’re all in this together.”

“I feel like a lot of people around our neighborhood take evening walks or something, or ride their bikes, and get to see them,” Sawyer said.

Teva said that the process of coming up with the quotes took a while. “We thought of some of them ourselves, and then some of them we found on the internet at other places like that, but it was a really long process to make the signs,” she said.

“It’s hard for everybody, and we just wanted something uplifting in our neighborhood that could make people happier,” she said, and added that the process of finding the quotes and making the signs also helped cheer them up.

You see, the family that worked to cheer up a neighborhood is going through a particularly rough summer–Abby’s father is at UT Southwestern, where he was admitted after his daughter brought him from California in July after his diagnosis with stage 4 cancer.

“The signs help us get through it, too,” Teva said, “because all the quotes are hopeful. And we see them on our walks, too.”

While their mom spends time at the hospital with their grandfather, the two said, they’re making more signs, and plan on hitting a few more streets in their neighborhood soon.