DALLAS – Julie Marie Callahan Miller, 70, of Dallas, Texas, a devoted wife, mother, grandmother, and friend, passed into Glory on August 23, 2020, after a 10-month battle with cancer.

She is the daughter of the late Julie and Robert F. Callahan. Born in Boston, Massachusetts, and raised in Larchmont, New York, and Mission Hills, Kansas, Mrs. Miller was the eldest of seven children. Her father served in the Office of Strategic Services in China and Vietnam in World War II, and her maternal grandfather, Daniel T. O’Connell, was a judge at the War Crimes Trials in Nuremberg, Germany.  She attended Notre Dame de Sion High School and earned an undergraduate degree in business from Southern Methodist University.

Julie was mostly defined by family. When flying back to SMU from New York City, Julie sat next to the love of her life, Allen P. Miller. They married seven months later and went on to have three children: Don, Julie, and Marianne. A devoted mother, she spent her time focused on her family, creating a home filled with laughter and love. After her children grew and married, her seven grandchildren soon filled her days.

Julie was a member of the Sovereign Military Order of Malta, where she served as head of Malta’s Sunday Suppers for Catholic students at the Neuhoff Catholic Center at her alma mater SMU. Julie exemplified the tenets of the Order of Malta by her service to the poor and the sick and as a defender of her faith.

Julie is survived by her husband of 46 years, Allen; son Don and wife Elizabeth; daughter Julie Miller Weber and husband Kevin, all of Dallas; daughter Marianne Miller Davidovich and husband Mark of Fort Worth; seven grandchildren; five brothers and their wives; numerous nieces, nephews, great-nieces, and great-nephews; and a host of loving friends.

A memorial service will be held on Friday, August 28, at 2 pm at Christ the King Catholic Church, 8017 Preston Road, Dallas, Texas 75225. In lieu of flowers, the family has requested donations to the Order of Malta – Dallas Area and sent to Dallas Chapter of The Sovereign Military Order of Malta, 2913 Shelton Way, Plano, Texas 75093. 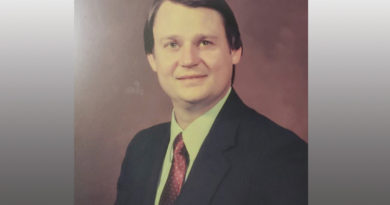