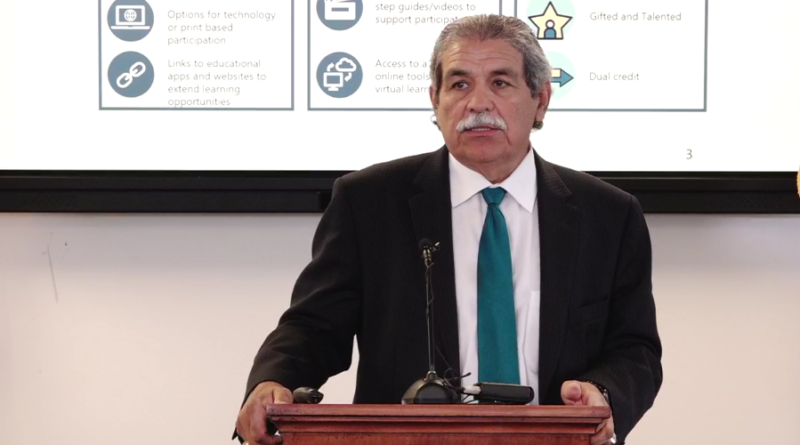 The weekend approaches, and with it, potential good news: Cases are continuing to decline, and Dallas ISD may reconsider its stance on extracurriculars (including sports) because of that. We have today’s bullet points:

Hinojosa Hints at Potential Change in Decision for Sports

During his update, Dallas ISD superintendent Michael Hinojosa said that Wednesday’s meeting with Dallas County health officials brought good news – namely that the county continues to post lower case counts, and that the county could be headed out of the red zone in its risk level chart, and out of the “Stay Home, Stay Safe” level and into “Extreme Caution.”

An embargoed document that should be revealed to the public in the next couple of weeks or so, he said, will outline what activities could be safe now that cases are lower, and under what guidelines those activities would be considered safest.

Because of that, he said, the district may reconsider some decisions on extracurricular activities soon. This update came after two protests organized by student-athletes, including one outside the school board meeting Thursday.

“We’re finally turning a corner,” Hinojosa said regarding the virus, but added that the district’s decisions would still follow county guidance.

Of the 219 new cases, 59 were from the Texas Department of State Health Services’ electronic laboratory system, and are mostly from the months of June and July.

Among the five deaths reported Thursday are a Richardson man in his 50s, a Dallas man in his 60s, and a Garland man in his 70s. All had underlying high-risk medical conditions.

From Aug. 1-14, 531 school-aged children between 5 and 18 years of age were diagnosed with confirmed COVID-19.  About 50% of these cases were high school age.  By zip code of residence, 302 (57%) of these children were projected to have been enrolled in Dallas ISD schools.

The 132 children who were diagnosed between August 10-14 were projected (by zip code of residence) to be enrolled in at least 70 different schools in Dallas County. If all public schools in Dallas County had been open for full on-campus only instruction during the week of Aug. 10, the county projects that their attendance on-campus would have prompted at least 70 classroom closures for cleaning and identification of classmate/teacher contacts for 14-day quarantine.

The county said that the number of COVID-19 hospitalizations Wednesday was 388 patients. Emergency room visits for COVID-19 symptoms also remain high, representing about 21% of all ER visits, according to information reported to the North Central Texas Trauma Regional Advisory Council.

“Today’s new COVID-19 positive numbers continue a trend of lower cases. We have a total of 165 cases that can be contributed to newer cases and 54 cases from previous months that were found in the State’s electronic laboratory system,” said Dallas County Judge Clay Jenkins. “The good trends we’re seeing are the result of you wearing a mask, maintaining six-foot distancing, washing your hands frequently, and avoiding unnecessary trips and indoor crowds where anyone is not wearing a mask one hundred percent of the time.

“If we keep our resolve for focusing on the community good, to keep not only ourselves but our community healthy, less people will get sick, more businesses will stay open so our neighbors will keep their jobs, and our kids can get back to school sooner rather than later.”

Congressman Colin Allred Thursday released a short survey seeking feedback and input from North Texans in the 32nd District regarding the U.S. Postal Service (USPS). This comes after reports and photos of dismantled machines at a North Texas USPS facility.

“Hearing from North Texans is one of the most important parts of my job, and I invite North Texans to take my survey so I can get feedback on service changes and how to best fight for the needs of North Texas,” said Allred. “Last week, I voted for a bipartisan bill to help end the attacks on the Postal Service and I will continue to fight for this essential service to ensure that postal workers can do their jobs and serve the American people.”

On Aug. 22, Allred voted for the Delivering for America Act, a bill that would prevent the USPS from making operational changes impacting the delivery of the mail. The bill would maintain service standards and prohibit USPS from implementing any changes to the operations or level of service it had in place on Jan. 1, 2020. It passed the House with bipartisan support and Allred is a cosponsor. It also includes $25 billion to support USPS operations.

On Aug. 20, Allred visited the USPS Dallas Processing and Distribution Center to see first hand the impact of the Administration’s changes on postal workers and the delivery of mail in North Texas.

Allred joined more than 190 of his colleagues in calling on Postmaster General Louis DeJoy to ensure Americans continue to receive timely mail delivery. In May, Allred voted for the Heroes Act, which provided $25 billion in emergency funds to help the USPS operate and protect its workers.

As we previously reported, the city of Dallas and Dallas County are welcoming evacuees from communities on the Gulf Coast because of Hurricane Laura.

Dallas County issued a local declaration of disaster Tuesday to provide relief and response from Hurricane Laura. Dallas County Judge Clay Jenkins said the county and the city of Dallas would front the money, which would be reimbursed 100% by the state.

As of 9 a.m. Thursday, the city of Dallas reported that the Office of Emergency Management received 17 buses, filled 152 hotel rooms with 41 rooms available, and took in 305 evacuees – 87 minors and 218 adults.

The Office of Emergency management is working to identify and coordinate additional hotel availability and other needs, as well as working with state resources for COVID testing for all guests.