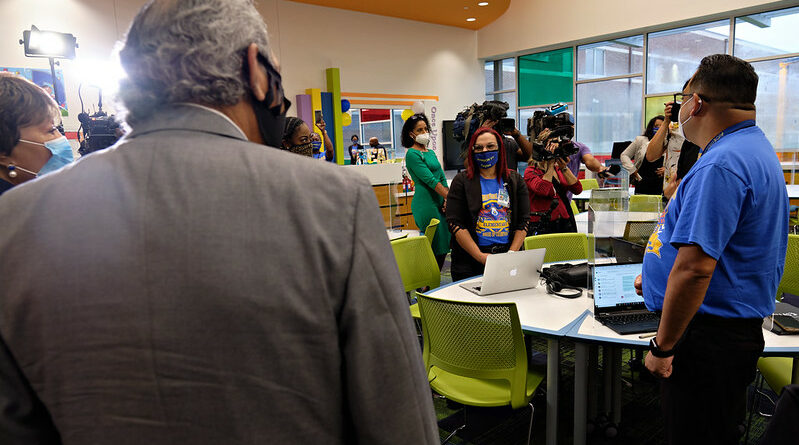 As students returned to school Tuesday (some virtually, some in-person), Dallas County reported some of its lowest numbers since this all began in March. These are today’s bullet points:

There is never a good time for all the phone lines and the website to go down for an entire school district, but the first day of school is probably the worst time.

The district worked to distribute hotspots and electronic devices for two weeks, but discovered about 10% of its students (mostly sixth graders who changed school over the summer) didn’t have devices Monday.

“We’re still deploying those devices, I’ve been told we got out 120,000; we’re anticipating 150,000 students so we still have a delta that needs to be accomplished in the next few days,” Hinojosa said.

Some families discovered their devices weren’t ready for school when they powered them on, too. Others had password problems, and couldn’t log on yesterday at all.

“The mistake we made was sending out the ‘How to change the password’ too late,” Hinojosa said.

And with websites and phone lines down, getting technical help was much more difficult. In Facebook groups set up by parents and PTAs, many parents began helping each other through some of the glitches.

“Anyone know how to fix this?” a parent queried about some wonky screen settings on their child’s Chromebook. Soon, three or four parents had provided the fix.

It may take a few more days to fix all those issues, but the district says that students who can’t connect just yet will have excused absences, and they won’t count against them.

A positive note? The district expected roughly 60% of its teachers would return, and on Tuesday, 58% did just that.

Most students (with the exception of pre-K, kindergarten, and some special education students, who can report on Sept. 28) will be able to come back to campus for in-person instruction on Oct. 5. But the district said yesterday that only about 20% of parents have responded to a survey that allows parents to choose distance or in-person instruction. So far, 44% of that 20% has indicated they will come back to campus.

Hinojosa said that the district does plan to have most of the biggest glitches ironed out by the end of the week.

An additional 3,226 probable cases were reported, and 10 probable deaths.

Of the 139 new cases, 63 came through the state reporting system, and all were from September.

Among the dead are two Dallas women in their 50s and a Dallas man in his 60s. All had underlying high-risk health conditions.

“Today we report a total of 139 new confirmed cases and three additional deaths. The lower number may be due to decreased reporting over the holiday weekend,” said Dallas County Judge Clay Jenkins. “Hopefully we won’t see a rise in cases from the holiday weekend if we all wore a mask, maintained six-foot distance, and avoided unnecessary trips and crowds. Today was the first day of school for Dallas ISD and many of our students here in Dallas County although many children experienced their first day of school this year online.

“With the decreasing numbers, I’m hopeful that more schools will be able to welcome back our youngest scholars soon, and if we keep the numbers down, that more and more kids will get the opportunity for in-person learning.”

UT Southwestern’s latest forecast projects that by Sept. 17, Dallas County hospitals could see concurrent hospitalizations decline to between 260 and 460 cases, with roughly 680 new cases per day on average.

From Aug. 15-28, 317 school-aged children between 5 and 18 years of age were diagnosed with confirmed COVID-19.  About 50% of these cases were high school age.  By zip code of residence, 167 (53%) of these children were projected to have been enrolled in Dallas ISD, and one case in Highland Park ISD.

Ten percent of all cases ended up hospitalized – 24% ended up in intensive care, and 13% ended up on a ventilator.

During the 19th anniversary of the 9/11 attacks, Communities Foundation of Texas will encourage volunteerism with a Freedom Day community service event.

Hundreds of volunteers representing CFT for Business member companies, sponsors, CFT fund holders, staff, and DFW-area veterans will join in service around the theme of “Equity” and “Justice for All.”

“The unprecedented COVID-19 pandemic, recent economic crisis, and urgent demands to end systemic racism have created tremendous need in our community,” the organization said. “This year’s Freedom Day will activate volunteers to help nonprofit partners meet growing needs related to these issues, with a focus on building thriving communities for all.”

Volunteers will be activated in 18 virtual, remote, and physically distanced projects throughout the day Friday, beginning with an opening ceremony at 8:30 a.m.

At 11:45 a.m., a special lunch and learn program will be offered featuring Dallas Truth, Racial Healing, and Transformation.