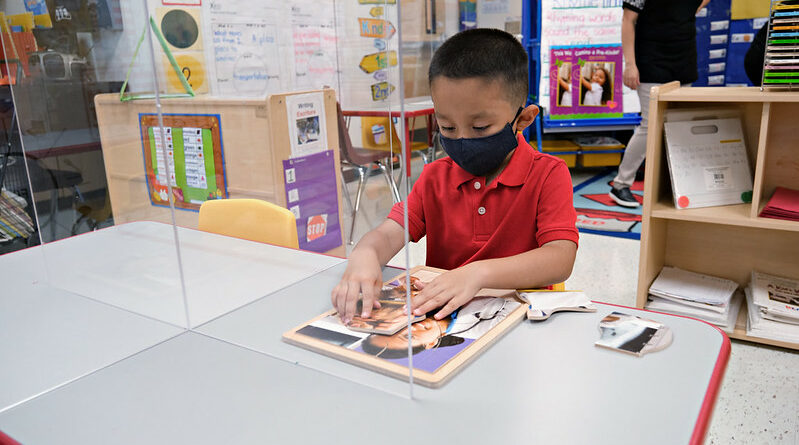 As students and teachers return to campus, the state will begin reporting confirmed COVID-19 cases on the district level next week. We have more on this, plus some additional bullet points for your day:

As we reported last month, the Texas Education Agency and the Texas Department of State Health Services will track confirmed cases of COVID-19 in public schools.

Thursday, the two agencies unveiled the dashboard that reports statewide case numbers only right now but will begin reporting cases on the district level on Sept. 23.

The reported count of on-campus student cases of COVID-19 in the state’s public schools is 2,344 out of an estimated 1.1 million students who have been on campus for instruction or activities since the beginning of the 2020-21 school year. The total count of on-campus staff cases during the same period is 2,175.

In an August letter to administrators, the TEA outlined two requirements that will provide the basis for state reports with the aim, the agency said, of giving state and local officials, as well as parents, the ability “to make future decisions on how to keep school populations healthy while supporting students’ educational needs.”

The letter detailed an online case report form that districts began submitting weekly beginning Sept. 8. Districts are required to report confirmed cases within 24 hours. The TEA and the Department of State Health Services will track and report the cases. Antibody tests, which indicate a previous infection, are not required to be reported.

Reporting this information to the state does not replace the legal requirement that schools notify public health officials in their area of all cases. Schools will still be required to inform all parents, teachers, and campus staff of any positive cases tied to their on-campus instruction or activities.

Additionally, the Texas American Federation of Teachers also revealed its own tracker, which relies on the reporting of teachers, parents, and students.

Just hours after Gov. Greg Abbott announced a loosening of restrictions placed on certain businesses and establishments because of the pandemic, Dallas County health officials reported 458 additional confirmed cases of COVID-19 Thursday, and one new death, bringing the total case count to 76,607, including 986 confirmed deaths.

Of the 458 new cases, 316 came from the state reporting system, and 52 were from previous months.

An additional 63 new probable cases with positive antigen tests results were reported as well, bringing the total of probable cases to 3,637, including 11 probable deaths.

The lone confirmed death was a Dallas man in his 60s with underlying high-risk health conditions.

“The governor announced his decision to allow increasing capacity at businesses throughout the state. The important thing for the community to look at is not what is permissible but rather what is safe,” said Dallas County Judge Clay Jenkins. “Doctors say that it is best to only frequent indoor establishments where masks can be worn one hundred percent of the time, to choose patio or takeout dining over indoor dining at restaurants, and to frequent establishments where it’s possible to stay at least six feet away from other patrons.”

“With the governor increasing capacities, it will be more difficult to find indoor experiences with at least six-foot distancing and it will be up to patrons to find the right establishment and time of day to patronize them safely,” Jenkins continued. “The Public Health Committee still recommends that people avoid bars, even if they’ve found some way to open under a loophole, and to use outdoor workouts in lieu of gyms.”

The county said that the number of COVID-19 hospitalizations Wednesday was 305  patients. Emergency room visits for COVID-19 symptoms represented about 16% of all ER visits, according to information reported to the North Central Texas Trauma Regional Advisory Council.

The percentage of cases occurring in young adults aged 18 to 22 years has doubled since May, increasing to 15% over the past two weeks. A provisional total of 136 confirmed and probable COVID-19 cases were diagnosed in school-aged children (5 to 17 years) during CDC week 36, a decline from the previous week for this age group. The county also began providing a breakdown of positive cases at schools, but in some cases, the districts themselves are self-reporting to the public in a more timely fashion.

According to Highland Park ISD’s dashboard, families were notified Sept. 17 about nine new lab-confirmed cases of COVID-19 involving students at Highland Park High School. The students were last present on the HPHS campus as recently as Wednesday. All told, it appears that three staff members with the district and 13 students have tested positive, with five students being deemed well enough to return to campus.

Dallas Habitat for Humanity will host a virtual Advocacy Day Sept. 24 from 11 a.m. to noon, where both local and national leaders will discuss how the issues of housing, voting rights, and equity have been brought to the forefront by the pandemic and the resurgence of the Black Lives Matter movement.

With less than 50 days until the election, the free event, sponsored by MetroTex Association of Realtors, aims to promote voting and raise awareness about key policy issues in the DFW community that could further drive housing inequality in hopes of helping educate the community and promote being advocates during the upcoming election.

The speakers will discuss what’s on the ballot and registering to vote, racial justice and equity, and what to be aware of when it comes to affordable housing and local policies.

The event is free to the public, and you can register here.