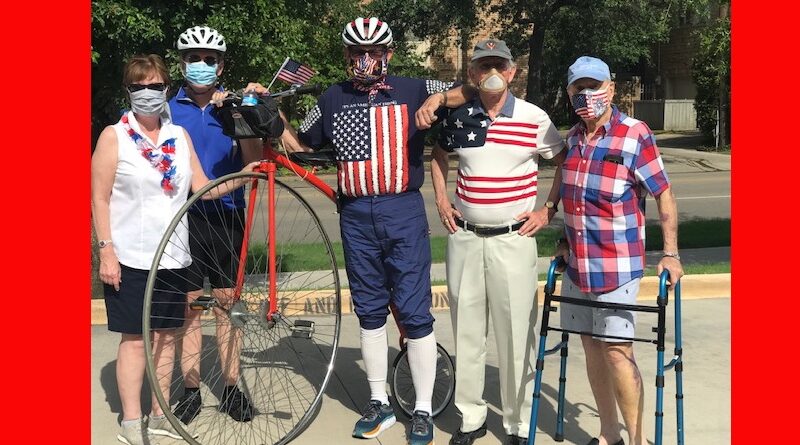 Not even a May hip replacement surgery could keep Jim Whorton from riding his high-wheeler bicycle in the Park Cities Fourth of July parade in 2014. However, this year, the COVID-19 pandemic led to the cancellation of the parade, as well as the traditional State Fair of Texas.

Jim Whorton has been a fixture at both events, having participated in the parade for nearly 45 years, and worked with the State Fair for about 20 years.

He started riding high wheelers in 1975 and now has two – an antique built in 1885, and a newer one – plus plenty of stories of riding in the parade. His vintage red Mustang convertible has also been a fixture of the parade.

“These are not exactly real easy to ride. You’ve got to watch people that are down there, or they’ll walk out in front of you because you don’t have any brakes on, so you’ve got to go in circles,” Whorton noted of riding high wheelers. “I’ve taken three falls, and one of them was really not my fault, but I came off the front of the bike.”

Traditionally, he would also host a gathering of 60 or 70 after the parade at his home in University Park to sing patriotic songs and enjoy Peggy Sue BBQ.

Even this year, he rode his bike around for the Fourth of July despite the parade’s cancelation.

The West Texas native served in the U.S. Marines and spent a year traveling the world before he returned to the U.S. and graduated from Texas Tech in 1965.

Whorton came to live in University Park around 1970 after a job with Ford Motor Company brought him to the Dallas area.

He has two sons. Jeff, a lieutenant colonel, serves as a chaplain in the military. Another lives in Denver and works for a helicopter company.

Whorton also began working at the State Fair around the time he retired from Ford in 2000.

“I’ve done all kinds of jobs,” Whorton said. “I used to ride the high wheel bicycle out there. I’ve done it about three times at the State Fair.”