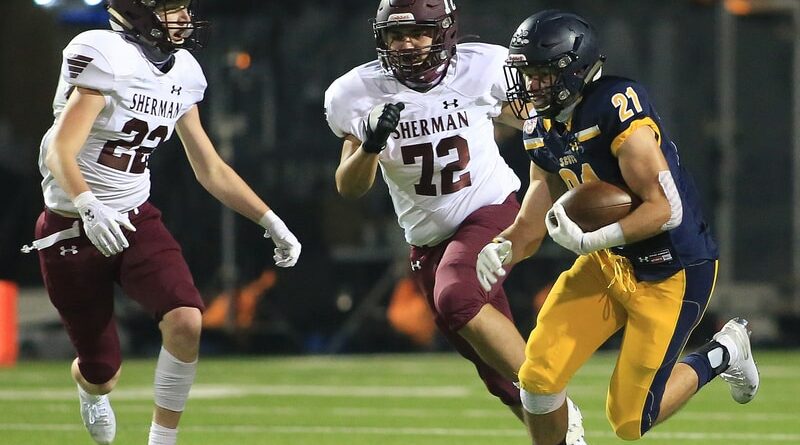 Those ingredients mixed perfectly during a 41-21 win over Sherman in the District 7-5A Div. I opener at Highlander Stadium.

The Scots (3-0, 1-0) will take an undefeated record on the road for a showdown against fellow powerhouse Longview next week, in a game that will likely have significant district title implications.

Against, the Bearcats, Brayden Schager again was the standout, throwing for 255 yards and adding two of HP’s five rushing touchdowns. He completed 16 of his first 17 passes, spreading them around to eight different receivers.

“He made good decisions on who to throw to ball to,” said HP head coach Randy Allen. “They were giving us some things underneath, so we took them, and then when he had a chance to go deep, he made a really pretty throw.”

Meanwhile, a pair of turnovers forced by the defense enabled the Scots to break open a seesaw game in the first half.

One play after HP took a 14-7 lead late in the first quarter, Marshall Landwehr scooped up a fumble and returned it 19 yards to the end zone.

Sherman’s next drive went 12 plays before the Bearcats coughed up the ball again, and Garrison Vincent recovered at the HP 24-yard line.

That set up the Scots’ third of four consecutive touchdown drives before halftime, as HP’s advantage ballooned to 35-7.

“Turnovers were the key to the game,” said Sherman head coach J.D. Martinez. “We’ve got to take care of the ball and execute offensively. It was just unfortunate.”

“We think we have three backs who can get the job done, but that offensive line makes it happen,” Allen said. “They’re dominating when they start blocking folks. I was really proud of our running game.”

As impressive as Schager’s passing performance was, none of his completions resulted in touchdowns. Still, he connected on 19-of-22, with Crockett Corwin tallying a game-high 97 receiving yards on six catches.

Even with the comfortable margin in the second half, the HP defense remained stingy. The Scots stopped two consecutive Sherman drives on fourth-and-short in HP territory, with Landwehr again the catalyst.

Harrison Dugger contributed the third takeaway for the Scots with an interception near midfield in the fourth quarter.

The Bearcats (2-4, 1-1) put together an impressive 75-yard opening drive, capped by a short touchdown pass from Tate Bethel to Sean Husband.

However, Sherman didn’t score again until the fourth quarter, when the game was already out of reach. Mathias Coleman returned an interception to the end zone, and Bethel hooked up with Benji Omayebu on a long touchdown pass in the final minute.

The result was HP’s ninth consecutive win over the Bearcats in a rivalry that dates back decades. Sherman hasn’t beaten the Scots since 1981.