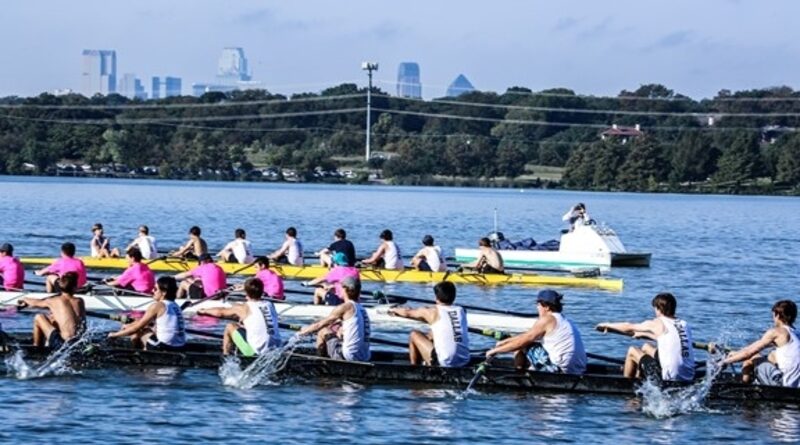 With traditional rowing schedules cut back by the COVID-19 pandemic, old rivals Highland Park and Jesuit arranged an impromptu recent series of head-to-head sprint races at White Rock Lake that enabled both programs to showcase their depth and talent.

Fall rowing is normally for greater distances, but these two teams chose to take measure at the shorter 2,000-meter sprint distance, which decides USRowing’s Youth National Championship each year.

The two teams are closely tied, besides having their boat houses just minutes from one another. Matriculation from middle school to high school might put friends in opposing boats, and Jesuit rowers often train with Dallas United Crew — which includes Highland Park — during the summer months.

In the first meeting on Oct. 10, the two squads raced even lineups, meaning each team split their first and second Varsity Eights to race four even boats. DUC’s B boat took two of the top three 1,500-meter races. Jesuit swept the third Varsity Eight races, winning each piece; however, DUC fought back to close the margin on the last piece.

On Oct. 31, the lineups maximized speed, matching the fastest rowers against each other for four pieces. In the first Varsity race, Jesuit took a quick two-seat lead; DUC clawed back to even over 1,000 meters. With 500 meters to go, Jesuit pushed three seats ahead. DUC countered, bringing up their stroke rate to gain four seats; Jesuit tried to match, gaining one seat on DUC with 100 meters left. The finish was too close to call.

The boats lined up for another go, but at the start of the second race, debris in the water rendered DUC’s first Varsity Eight unrowable, ending racing for the top boats. DUC’s second Varsity boat dropped the first three races to their Jesuit competition, then pulled together for a convincing win over the Rangers in the fourth race.