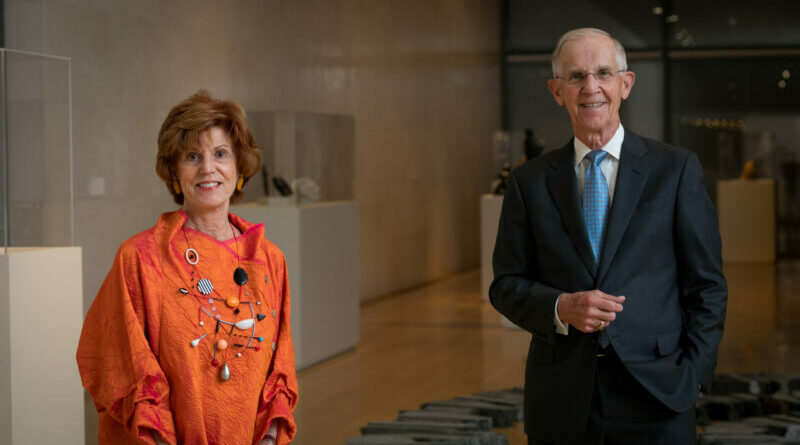 Preston Hollow’s Donna Wilhelm and Sam Self will be honored as The Arts Community Alliance’s Silver Cup Award recipients in a luncheon this Spring, the organization announced.

Wilhelm and Self will be the 43rd recipients of the award, which each year spotlights two individuals who have made lasting contributions to arts and culture in the Dallas community.

TACA announced the selection of honorees at a reception last Thursday at the Nasher Sculpture Center attended by special guests, including past TACA Silver Cup recipients.  At the gathering, TACA president and executive director Terry D. Loftis thanked TACA’s past and present Silver Cup honorees and other generous donors.

“I’m proud of TACA’s longstanding tradition of recognizing individuals who’ve contributed to the rich fabric of Dallas’s arts and cultural landscape,” said TACA board chair Tara Lewis. “This year we’re thrilled to honor Donna Wilhelm and Sam Self, two philanthropists who’ve been faithful arts supporters and who are an inspiration to me personally.  They’ve made a notable difference in the vibrancy of our city through their gifts of time, talent, and treasure.”

Author of A Life of My Own, A Memoir, Wilhelm dedicates her book sale profits to build the capacity of underserved women, girls, and youth education.  Her broad philanthropic mission empowers the arts and cultural connection, mental health, and environmental conservation.

In her home community of Dallas, she is a life trustee of KERA, North Texas Public Broadcasting and regional Dallas Theater Center; board member of TACA, SMU Data Arts, The Nasher Sculpture Center, and a past trustee of DFW World Affairs Council.  Nationally, she serves as a trustee of National Public Radio, and globally, she supports education-based initiatives in developing world countries.

Wilhelm’s undergraduate education was at CUNY, Hunter College, and her postgrad work in jewelry design was at NY Parsons School of Design. She completed The Philanthropy Workshop (TPW) training, established by The Rockefeller Foundation, and continuing alumni global workshops.

During the COVID pandemic, she’s found solace through her arts training.  Using photographs, she creates ink sketches and watercolor portraits to sustain her connection with friends and family members.

Self is a stalwart supporter of the arts in Dallas and has been a key link between the business community and the arts.  After a 34-year career at Texas Instruments, he retired in 2002 as senior vice president, corporate controller, and chief accounting officer. Since, he has served in many capacities with Dallas arts organizations, including past roles as president and executive director of the Dallas Symphony Orchestra during a transition period for the organization, as well as past chair of the DSO Foundation.  He serves currently as a DSO building committee member.

“It is difficult to imagine more impactful volunteer service to the Dallas arts,” said Don Glendenning, who nominated Self.  “Sam has been a quiet but key figure in fostering corporate philanthropy for the arts through his tenure with TI and Chairmanship of the TI Foundation.”

In addition to serving as chair of the Texas Instruments Foundation, Self serves as director of The Eugene McDermott Foundation, using both as a platform to continued promotion of the arts in Dallas.

In addition to his contributions to the DSO, Texas Instruments Foundation, and The Eugene McDermott Foundation, he has served on the board of directors and in committee roles with the United Way of Metropolitan Dallas and as a Court-Appointed Special Advocate (CASA).

Self received an MBA degree from the Wharton School, University of Pennsylvania, and a BS degree in business administration from The Citadel, The Military College of South Carolina.  A native of South Carolina, he and his wife Diana have a blended family of four children and seven grandchildren.