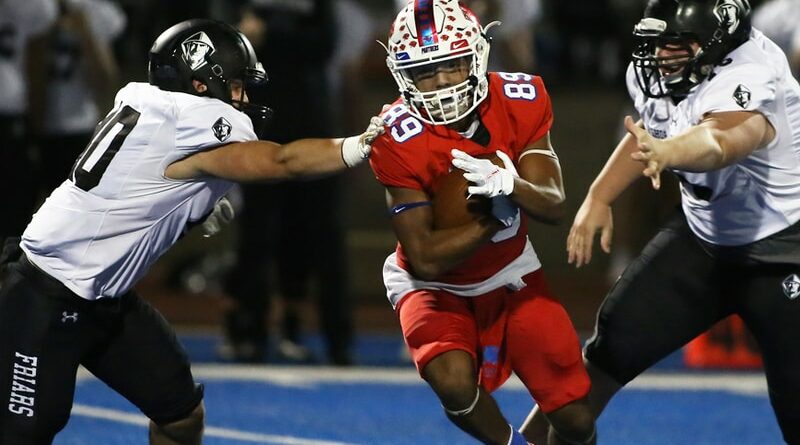 A week after suffering their first loss of the season, the Panthers bounced back to crush district rival Bishop Lynch 55-21 at Snyder Stadium.

Parish dominated from the get-go, taking a 49-0 lead at halftime. But while the outcome lacked drama, the Panthers provided plenty of excitement.

Preston Stone threw for 318 yards and had six first-half touchdown passes, including four to Jai Moore. He capped the last five Parish possessions of the first half with scoring tosses.

The senior quarterback and SMU commit also was honored postgame with a commemorative jersey as the school’s first-ever selection to the All-American Bowl, which is an annual all-star game featuring the top seniors in the country. The game won’t be played this season, but players are still being recognized.

The Panthers and Friars traded interceptions in the first quarter, with Parish’s Henry Partridge returning his pick for a touchdown.

Moore finished with six receptions for 97 yards, and teammate Blake Youngblood had a game-high 10 grabs for 108 yards.

Parish earned its second victory of the year against the winless Friars (0-6), after a 43-7 drubbing in the season opener on Sept. 25 at Lynch.

That sets up another rematch against Plano Prestonwood — which Parish also dominated during the regular season — at 7 p.m. on Nov. 28 at The Star in Frisco. Prestonwood had a first-round bye when San Antonio Christian forfeited due to COVID-19 circumstances.