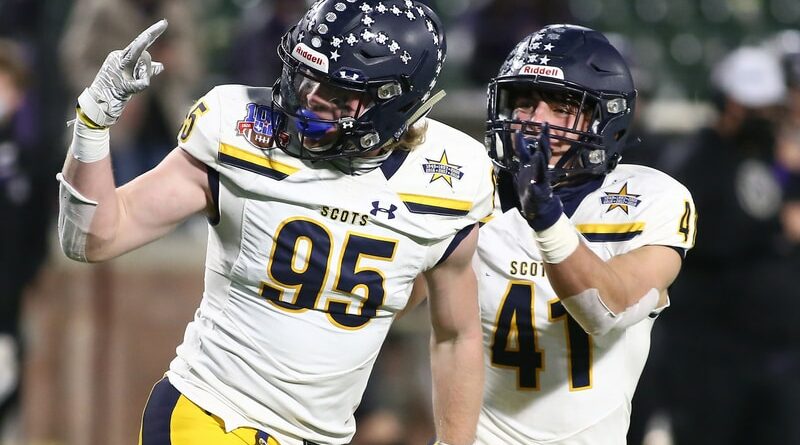 Prior to this season, Highland Park’s team captains strategically placed photos from last year throughout their locker room and meeting facilities.

The pictures weren’t from any of their 11 wins, but rather their overtime defeat to Frisco Lone Star in the third round of the playoffs that ended their season — and any hope of a fourth straight Class 5A Division I state title.

The Scots hope to tear down those visual reminders this week, as HP and Lone Star stage a rematch in the Region II semifinals on Thursday at Globe Life Park in Arlington.

Revenge will be a motivating factor for the unbeaten Scots (10-0), but the broader goal involves continuing their postseason path. A victory would give HP the unprecedented opportunity to finish its delayed 2020 campaign in January.

HP has been impressive in all three phases of the game — offense, defense, and special teams — in each of its first two playoff wins, including a 42-20 thrashing of Frisco Independence last week.

It continued the trend of first-quarter dominance for HP, which remarkably has outscored its last six opponents by a combined 159-0 in the opening frame. The Scots haven’t been seriously threatened during that stretch, averaging 50.5 points per game.

Brayden Schager has been consistent all season, accumulating more than 2,700 passing yards and 21 touchdowns to go with nine rushing scores. Will Pettijohn had emerged as his top receiving target with team highs of 24 catches and six touchdowns.

Meanwhile, Anthony Ghobriel has led a resurgent HP rushing attack with 726 yards and 14 scores, and an average of more than eight yards per carry.

They were all reserves last year, when Lone Star topped the Scots twice—once at Highlander Stadium during the regular season and again in the playoffs—and handed HP its only two losses in its last 39 games overall.

The Rangers (7-3) haven’t been as dominant this season without Marvin Mims, the record-setting receiver who’s now at Oklahoma. Their depth also has been tested by injury and quarantine issues.

However, Lone Star still has won seven of its past eight games behind a high-powered offense led by returning quarterback Garret Rangel and running back Jaden Nixon, an Oklahoma State signee.

Nixon tallied four touchdowns during last week’s 40-28 victory over Magnolia in the area round, while Rangel has thrown for six scores in the past two games.

The road doesn’t get any easier for the winner of Thursday’s clash, who will face either Denton Ryan or Longview in the Region II final next week.