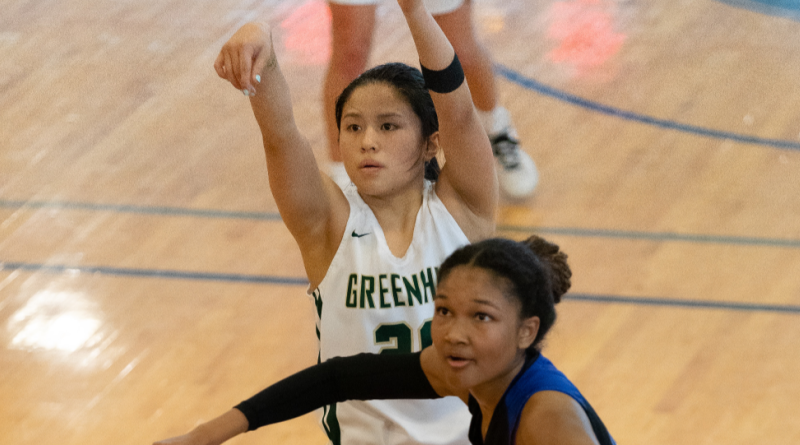 On a film set, Kati Gibson directs actors and crew members. On the basketball court, she directs herself and her teammates.

Such are the dual interests of the Greenhill senior, who helped lead her school to an SPC championship in basketball last season, only weeks after her debut short film, Chill, was accepted into the prestigious South by Southwest Film Festival.

“Time management is a big thing for me. Being able to pick out certain times in the day that I can work on certain things,” said Gibson, who also is a skilled pianist. “It makes it easier not to be stressed.”

That calm demeanor came in handy when Gibson nailed two clutch free throws to help seal the 43-40 victory over Houston Christian in the championship game in February.

“When she’s in that situation, a calmness comes over you. Her teammates are confident that good things will happen,” said Greenhill head coach Darryn Sandler. “She never seems fazed on the basketball court. Whether it’s the final minute of a close game, or she’s not having her best game, it doesn’t matter.”

At just 5-feet-5, Gibson stands tall as the point guard for the Lady Hornets. She’s in her fourth season at the varsity level, and was an all-conference selection as a junior.

“You don’t want your best players to be an emotional roller coaster, and she epitomizes that,” Sandler said. “She’s gotten better and better, and has a great work ethic.”

As for her artistic side, Gibson began playing around with a camera when she was little. She took her first film class as a sophomore, and last year joined the school’s Advanced Video Production course.

Chill, a three-minute comedic short starring some of her friends and neighbors, was filmed over the course of several weeks last summer. It is visually ambitious, with sequences shot inside a surgical suite and aboard an airplane. The project screened online as part of several other festivals this summer.

“It was definitely a really fun process,” said Gibson, whose father is a longtime Dallas advertising executive. “He gave me lots of direction and guidance.”

As she prepares for her senior season on the court, Gibson said she hopes to continue playing basketball in the future, along with making films and music. She’s started a small shoe business, too, which might prompt her to pursue entrepreneurship.

“I definitely want to keep everything with me when I go to college,” she said.