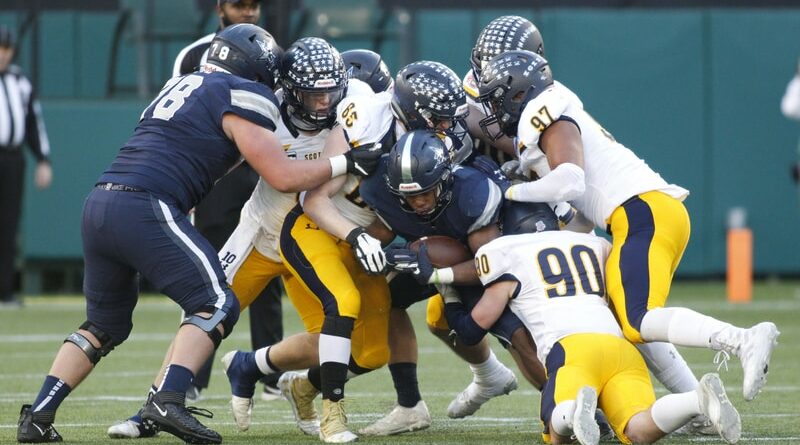 Last week, Highland Park exorcised some postseason demons with a win over Frisco Lone Star. This week, Denton Ryan will look to do the same — against the Scots.

Although the Raiders have a score to settle with HP, neither team will lack for motivation at this stage, as they play some unprecedented January football with a state quarterfinal matchup on Friday at Globe Life Park in Arlington.

By topping the Rangers 30-20 in the Region II semifinals of the Class 5A Division I bracket, HP atoned for a defeat against the same opponent in the same round last year. It also kept alive an unbeaten season and moved one step closer to a return to the state title game.

Meanwhile, Ryan was ousted by the Scots in the state semifinals in three consecutive years from 2016 to 2018. Each time, the Raiders suffered their first loss of the season, while HP went on to win the crown.

They are meeting one round earlier this time, with both squads carrying championship aspirations. Ryan was the runner-up a year ago, falling in the title-game nailbiter to Alvin Shadow Creek.

Behind a dominant defense, the Scots (11-0) have excelled in the first quarter of games all season. They have outscored their last seven opponents by a combined 166-0 in the opening frame.

On offense, HP has averaged almost 50 points per game during that same stretch. Senior quarterback Brayden Schager has remained perfect as a starter while throwing for almost 3,000 yards and 23 touchdowns. Eight of those scores have gone to Will Pettijohn.

However, a resurgent running game has been critical during the playoffs, led by the tandem of Anthony Ghobriel and Brooks Bond. Both of them have a 100-yard rushing game during the three-game playoff run, and they’ve combined for 11 postseason touchdowns.

Like HP, the Raiders (12-0) have been equally impressive on offense and defense throughout the season. Another commonality is that both teams have a hard-fought win over perennial powerhouse Longview on their resumes.

Ryan beat the Lobos 27-9 last week to advance, and also scored regular-season victories over Frisco Independence and Frisco Lone Star — HP’s last two opponents — on its way to a District 5-5A title.

The Raiders are led by several major college signees, including quarterback Seth Henigan (Memphis) and receivers Billy Bowman Jr. (Oklahoma) and Ja’Tavion Sanders (Texas). Junior defensive tackle Bear Alexander is one of the country’s top recruits at his position.

The winner of Friday’s game will meet either Red Oak or Mansfield Summit next week in the state semifinals.