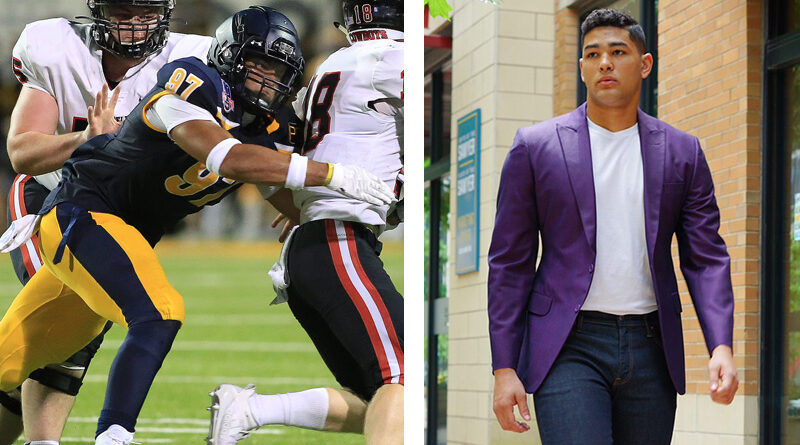 Scots senior can sack a quarterback and strike a pose

Don’t let his fashion-model looks fool you. Isaiah Pedack isn’t afraid to cover his face in eye-black and get dirty in the trenches.

By day, he’s a high school senior and a brand agent for Dallas-based clothier Austen Dor. But by night, he’s a nose tackle for a hard-hitting defense that has led Highland Park toward another deep playoff run.

Both happened almost by accident. Pedack didn’t play organized football until he was a freshman yet was practicing with the HP varsity squad less than a year later.

After a knee injury during his sophomore season, coaches told him to bulk up and change roles from a pass-rushing defensive end to a run-stuffing tackle.

Pedack admits he was apprehensive about the move at first, but after adding 50 pounds of muscle and learning a new position, he played a valuable reserve role last season.

“I was behind some pretty big guys on the defensive line, but I was able to get some pretty good playing time.”

“I stayed motivated to try and get back where I was at,” Pedack said of his recovery. “I was behind some pretty big guys on the defensive line, but I was able to get some pretty good playing time. It was about doing what’s best for the team.”

His senior year has been even better. Pedack led the Scots with eight sacks during the regular season and has earned several college scholarship offers. At 6-foot-3 and 255 pounds, he usually compensates for a weight disadvantage along the line of scrimmage with leverage and reach.

“I’ve tried to be more physical with the offensive linemen and make more opportunities for myself,” said Pedack, who also trains in mixed-martial arts outside of football. “I try to stick myself in every play.”

That’s not the typical description of a potential model, but it didn’t stop a representative for the custom menswear company from seeking out Pedack and his family at a restaurant. Pedack subsequently participated in a handful of photoshoots last summer and still promotes the Austen Dor brand online.

It makes for an interesting mix of photos on his Instagram profile and has yielded some good-natured ribbing from his teammates. “Big Play Zay” now is also “Models Inc.” But he takes his dual identities in stride.

“You’ve got to be the most physical guy and the grittiest guy on the field,” Pedack said. “It’s good to take a break from all that physicality and all that masculinity.”

TrendZen Carries Activewear For Women on The Go

Now This Is My Kind Of Summer Camp!