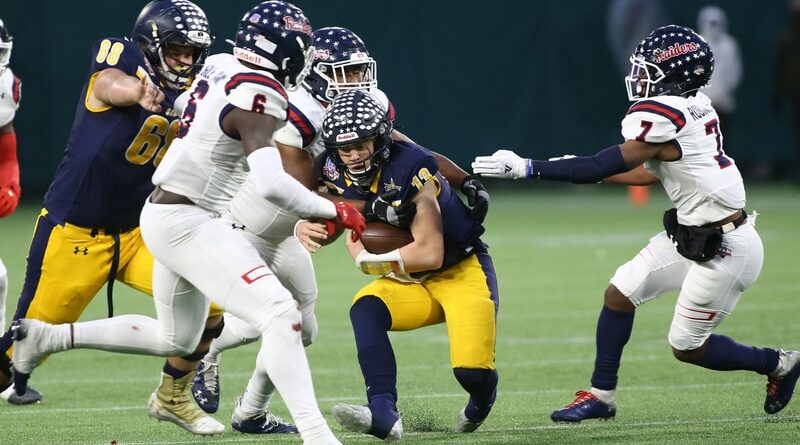 ARLINGTON — Denton Ryan had too much size, too much speed, and too much firepower. That combination ended Highland Park’s season.

The Scots couldn’t establish any momentum on offense throughout a 17-7 loss to the Raiders in a Class 5A Division I state quarterfinal on Friday at Globe Life Park.

The result provided some revenge for Ryan, which fell to HP in three consecutive seasons in the state semifinals from 2016 to 2018. The Scots went on to win championships each time, and now the Raiders will look to do the same.

HP found itself facing a rare early deficit, and its attempts to rally were consistently thwarted by the aggressive Raiders, who stuffed the run and defended the pass with equal efficiency. The scoring output was the lowest for the Scots (11-1) since the 2013 season opener against Aledo.

“Our defense kept us in the game. We had chances. We just couldn’t make it into the end zone,” said HP head coach Randy Allen. “We needed a big play. It’s hard to drive the ball against that kind of defense.” 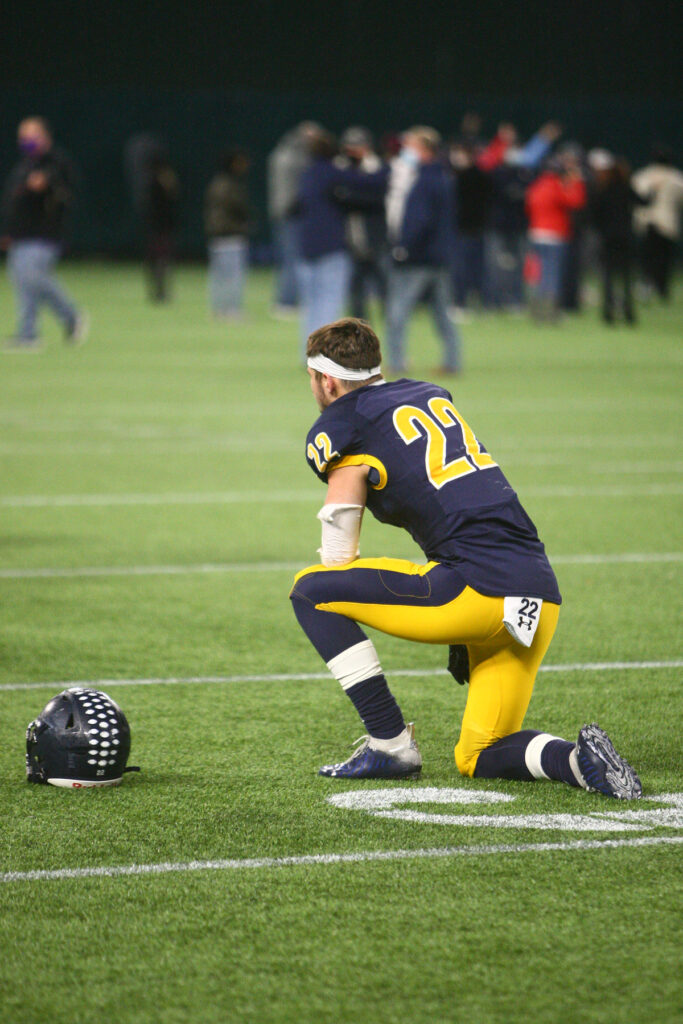 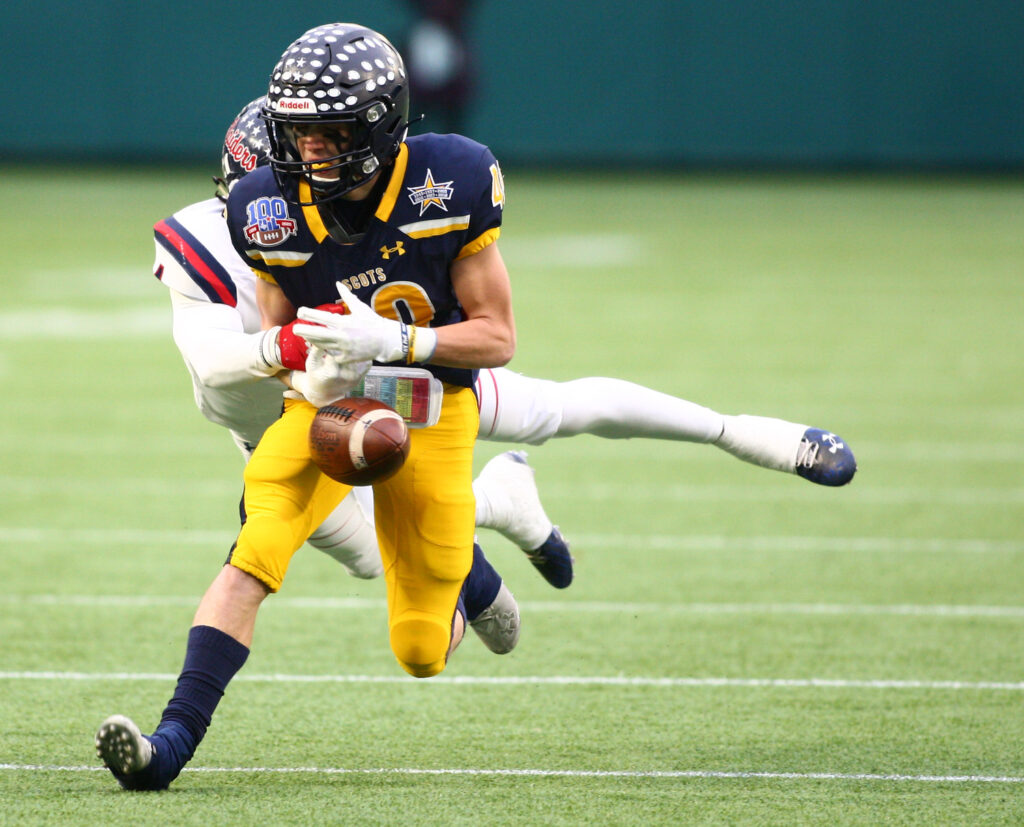 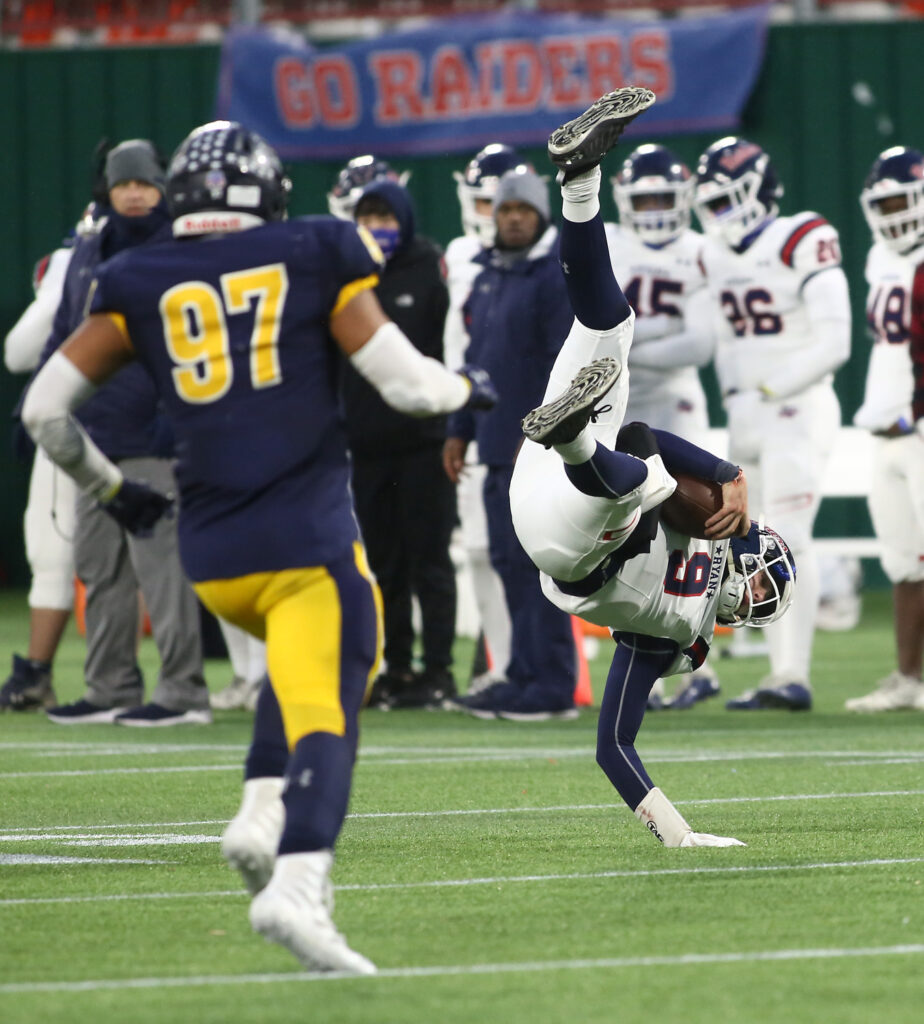 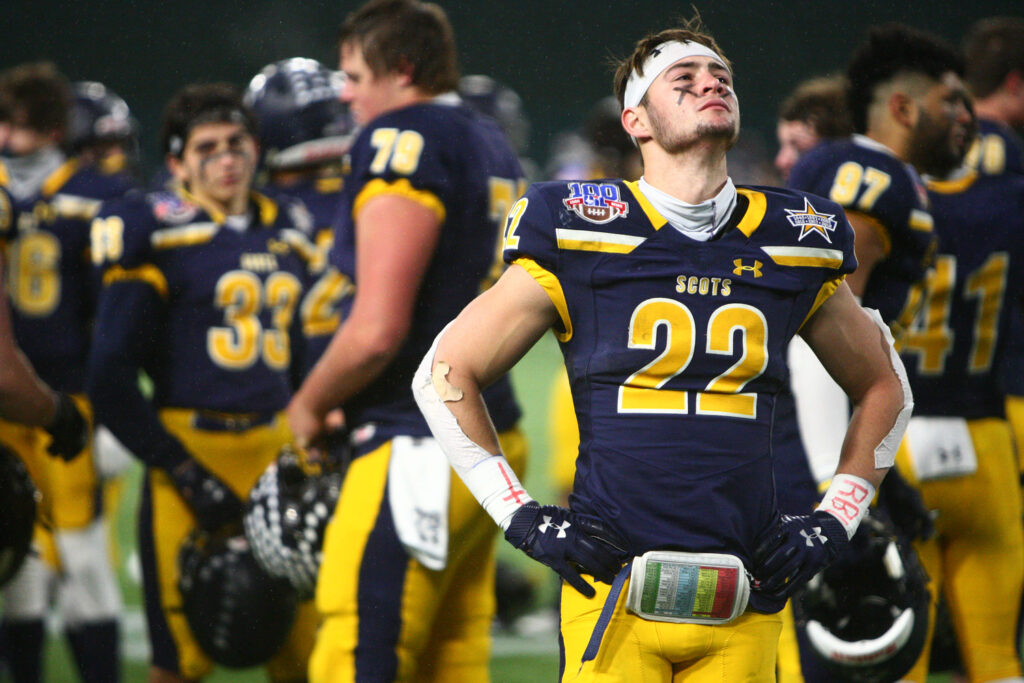 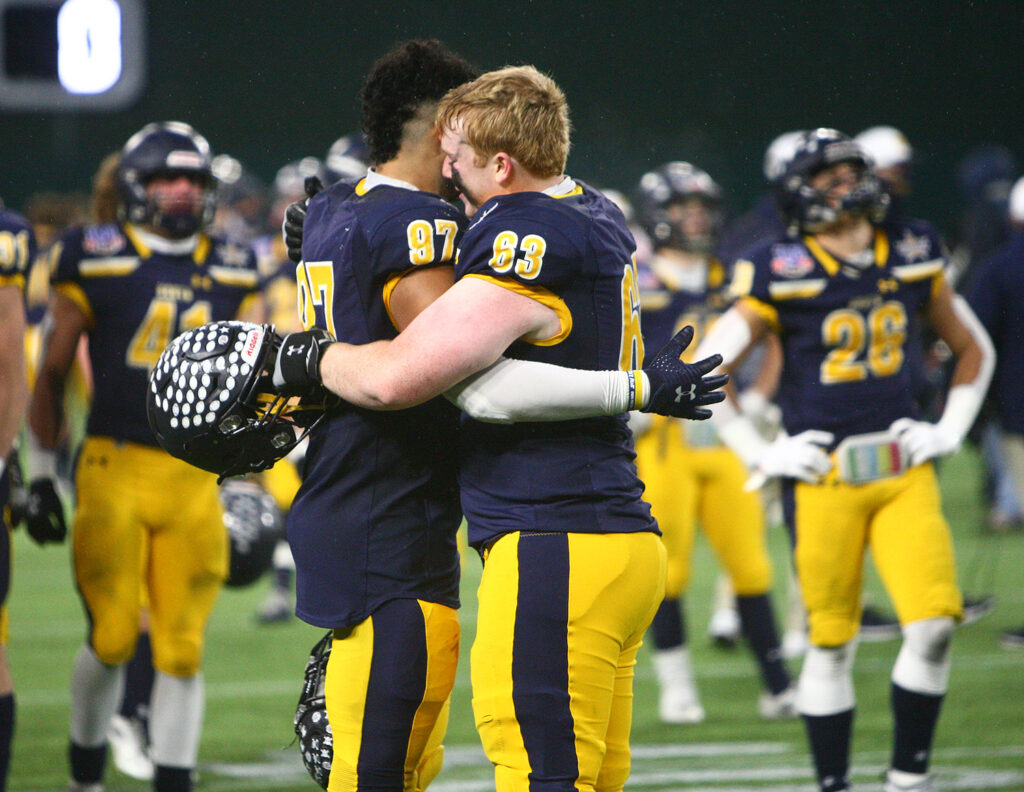 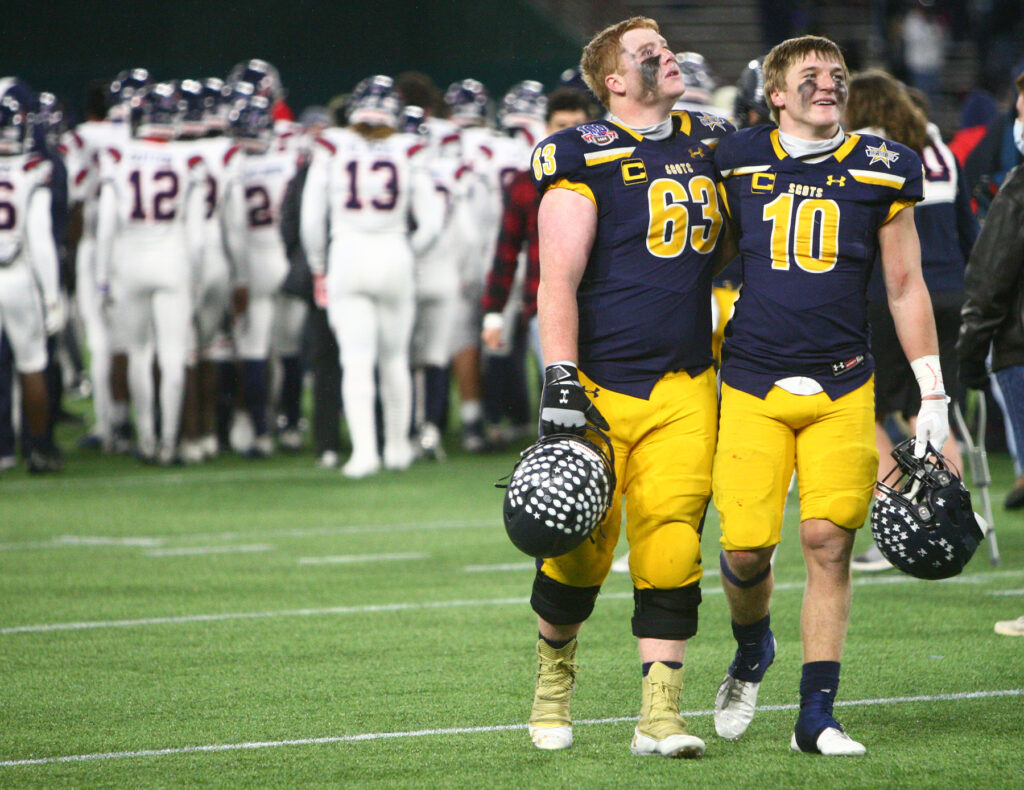 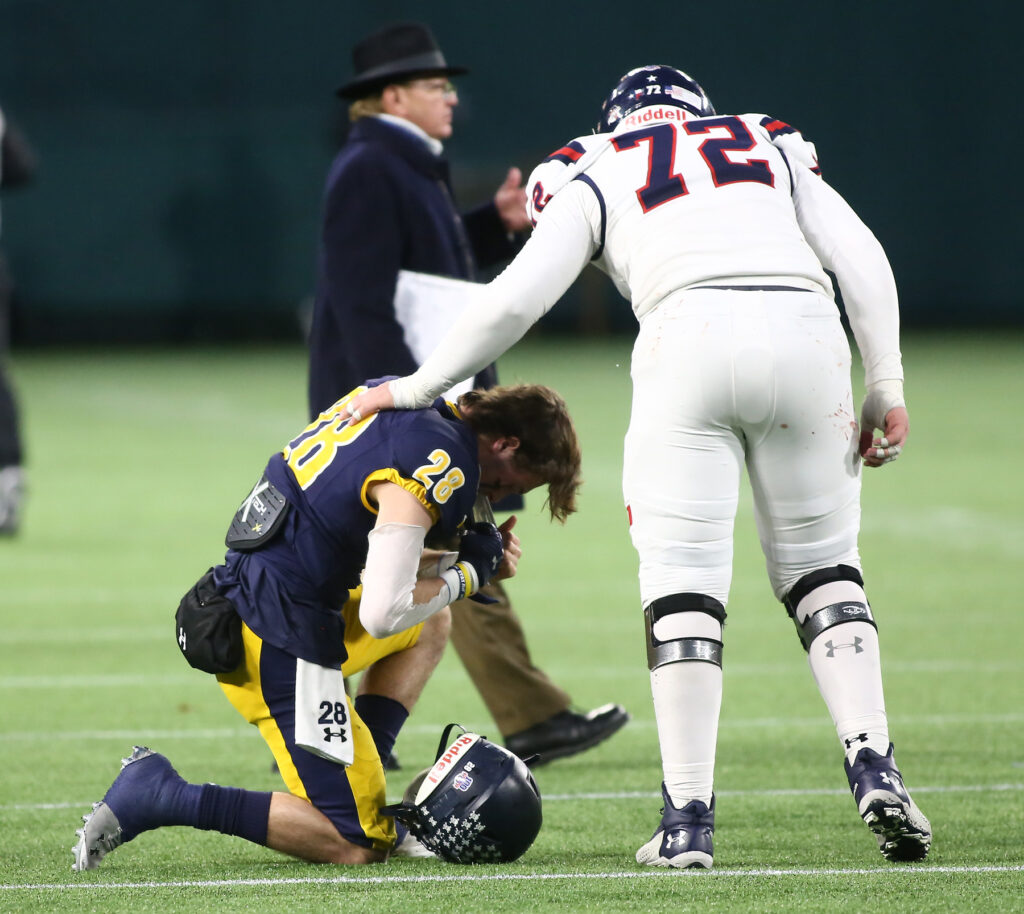 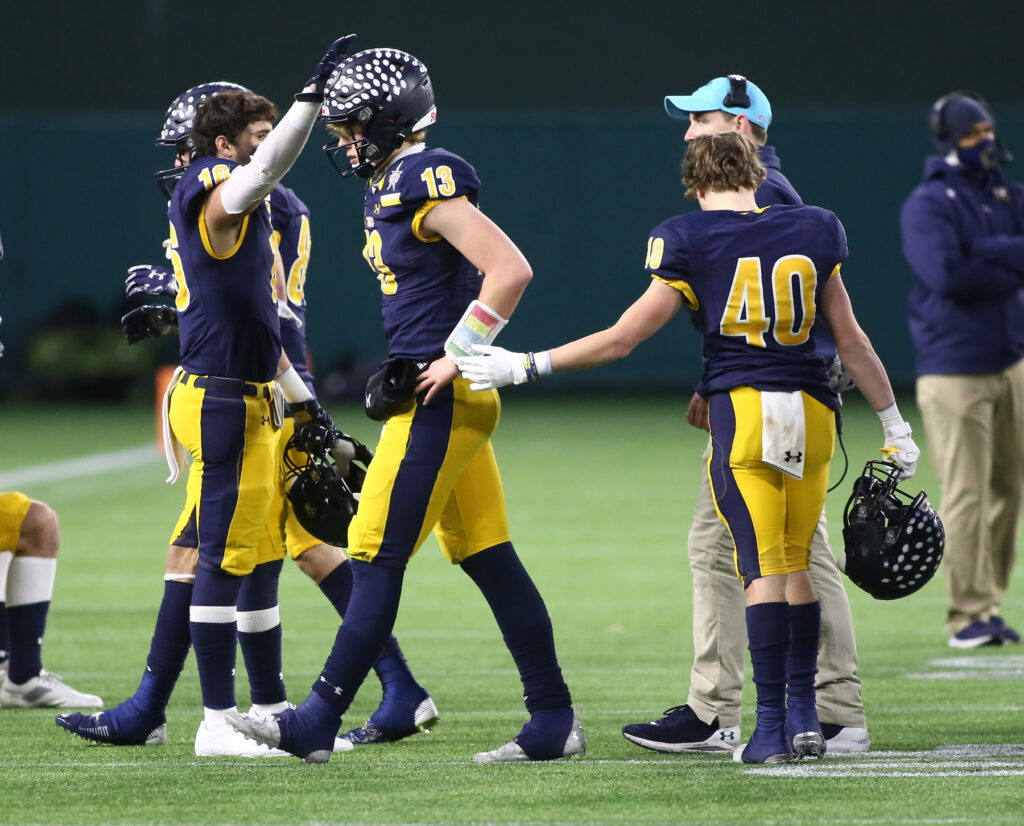 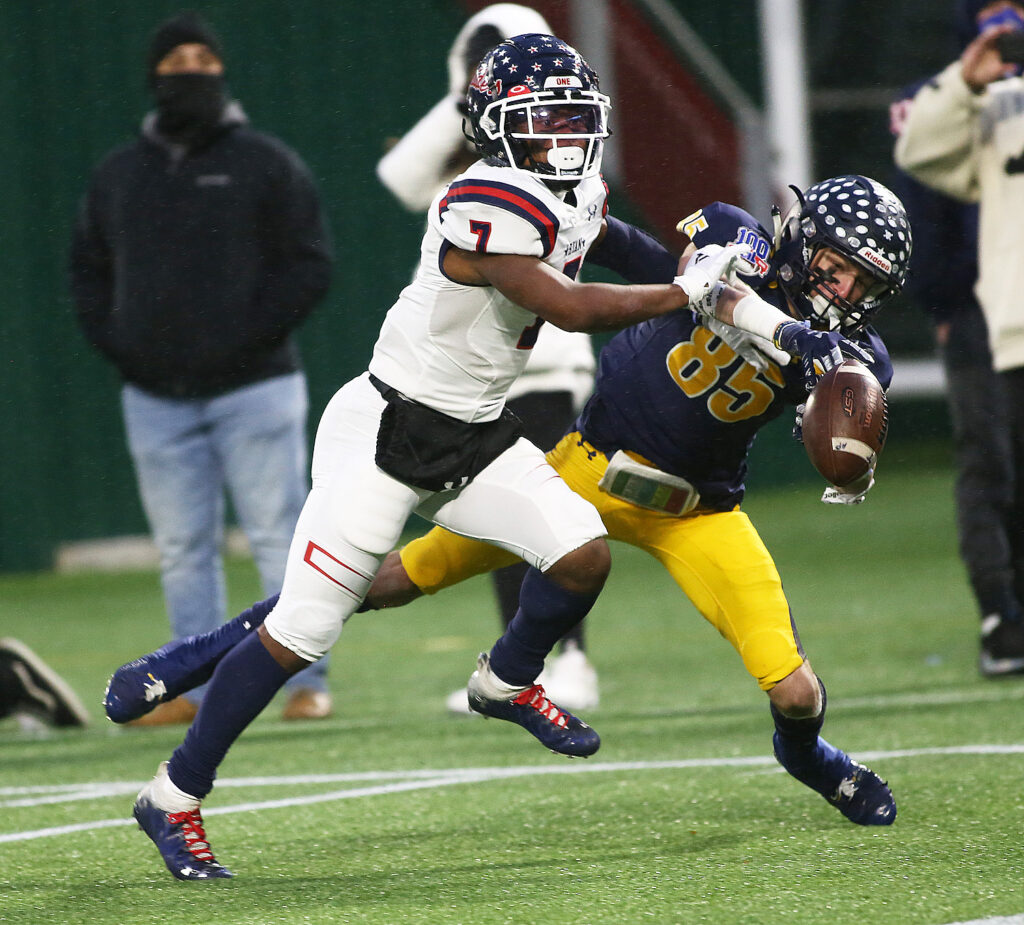 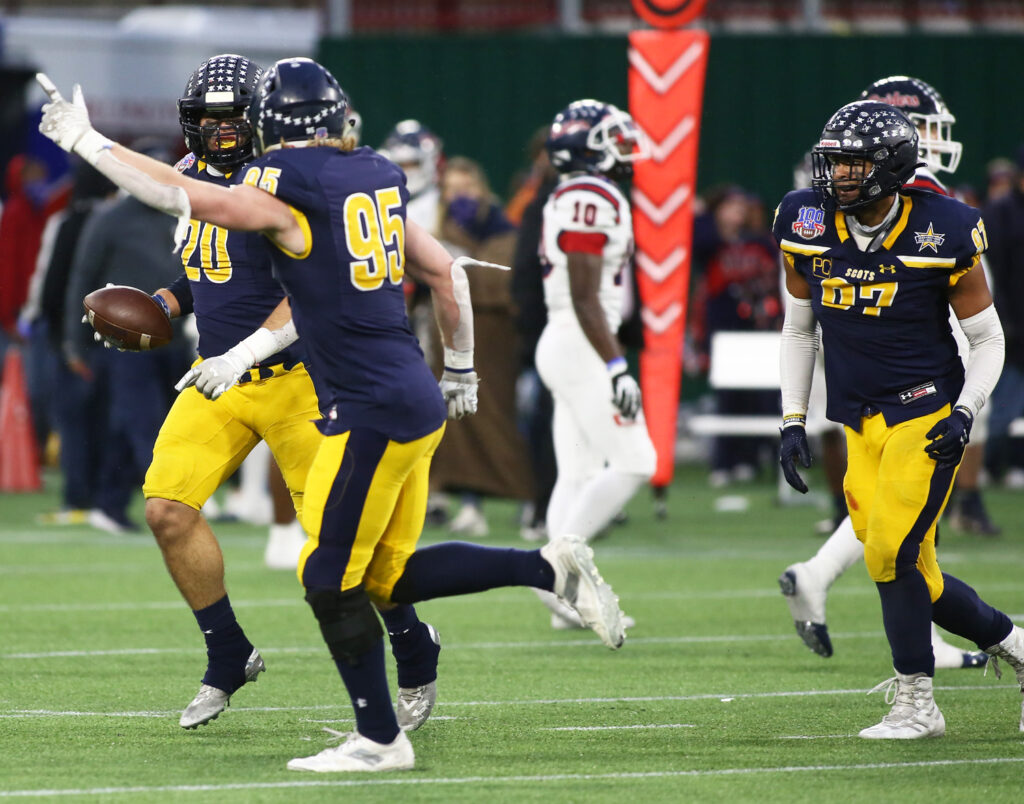 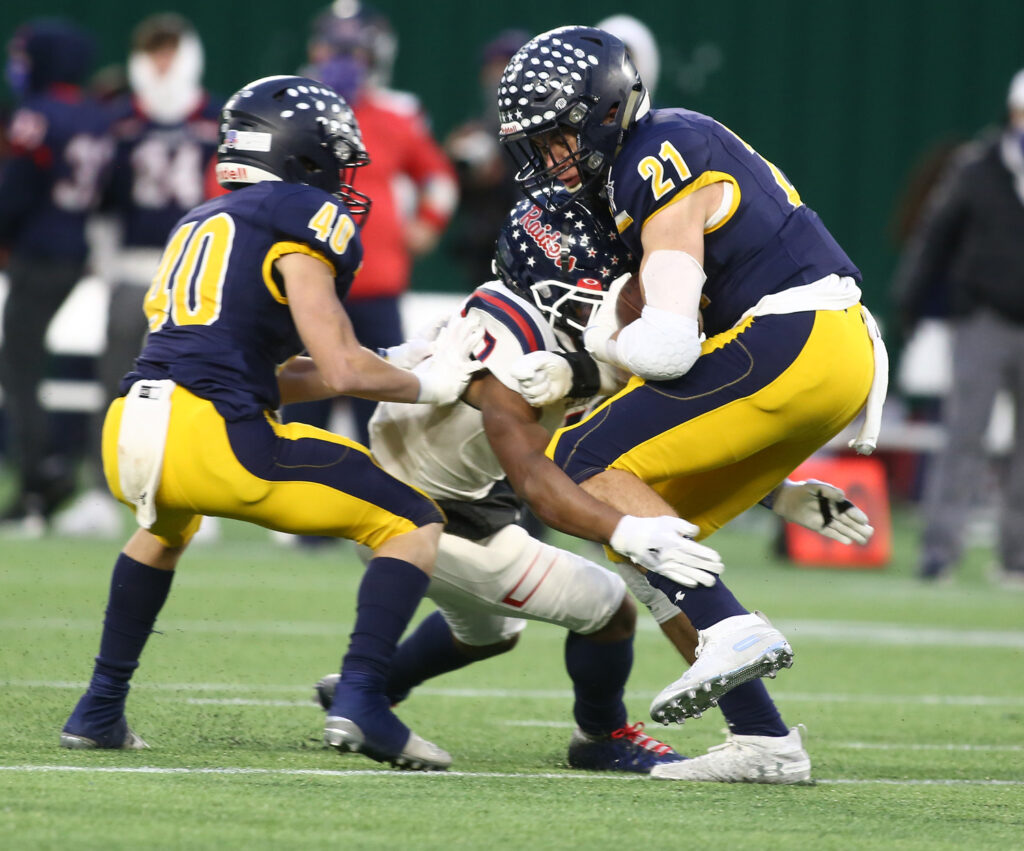 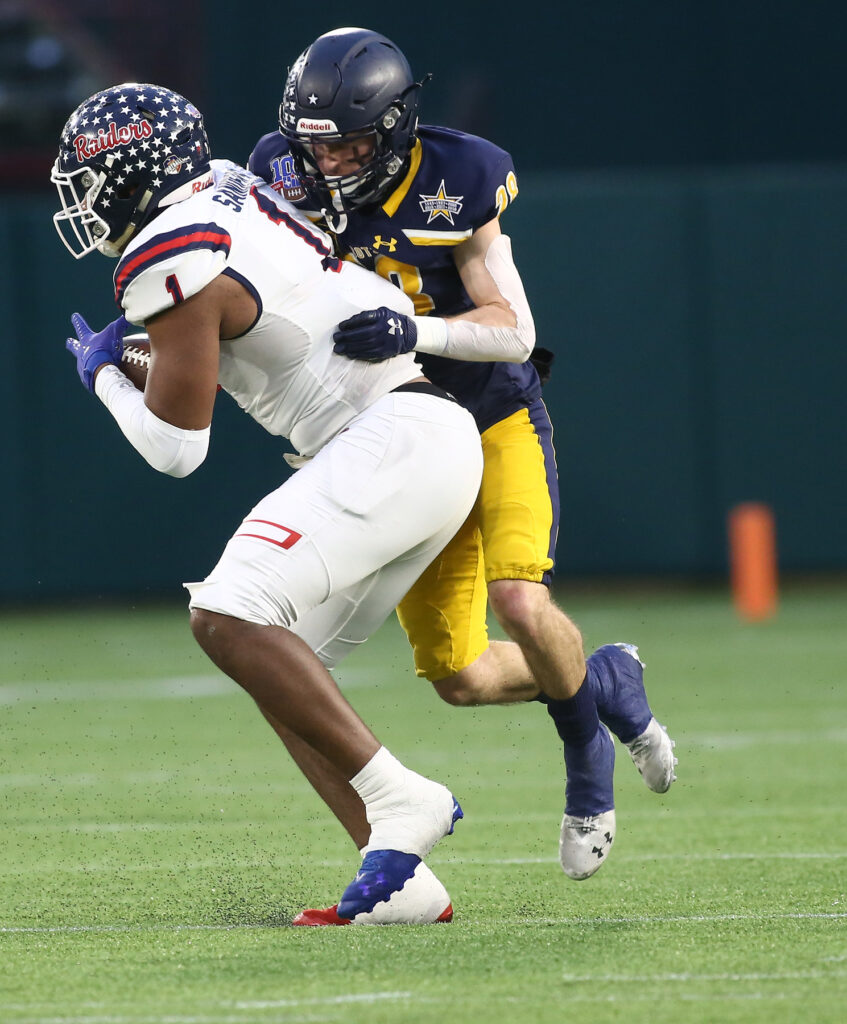 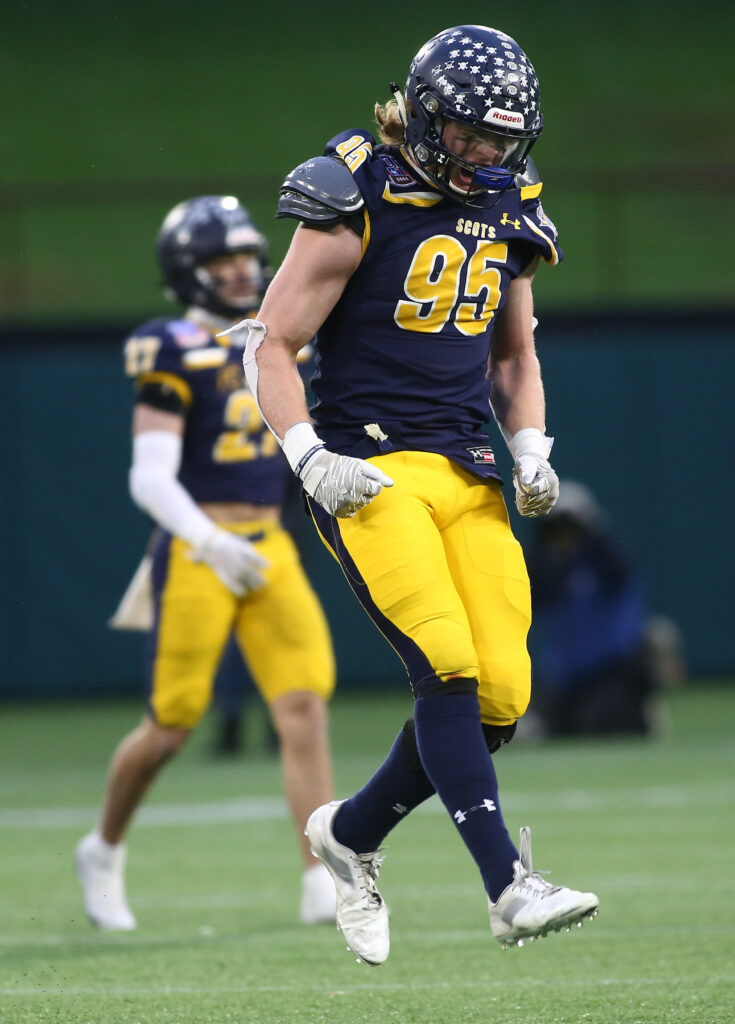 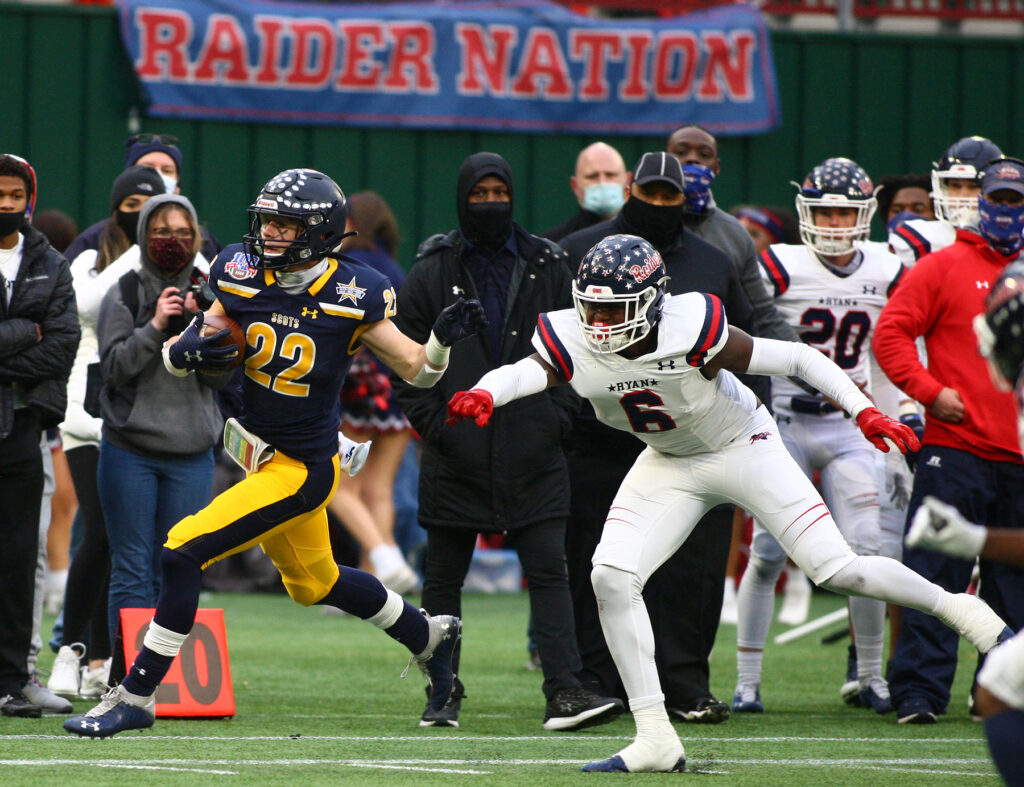 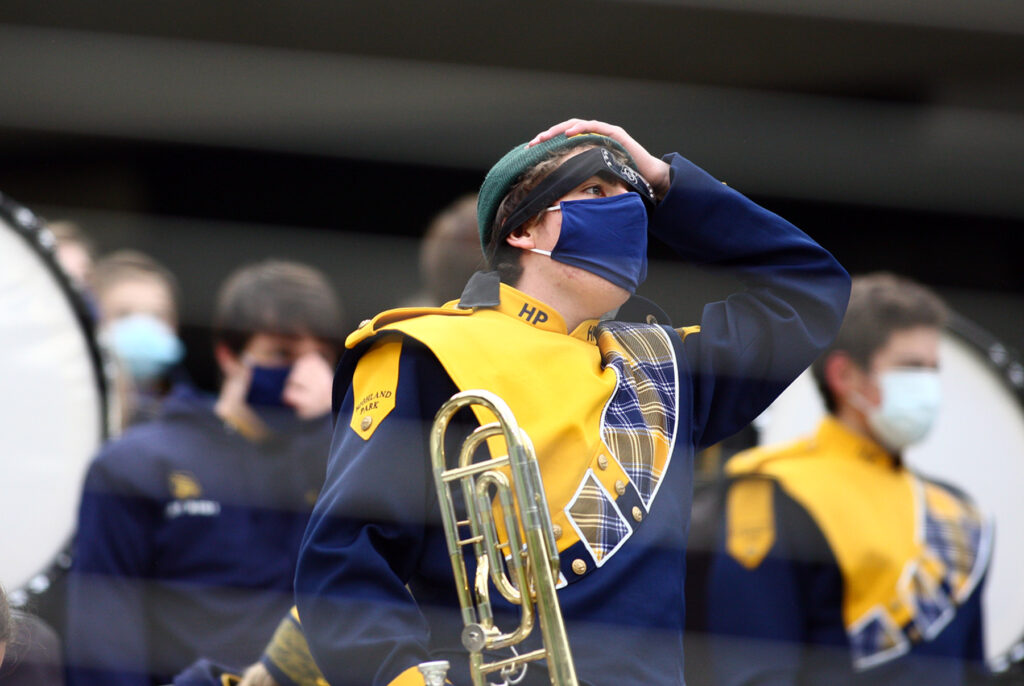 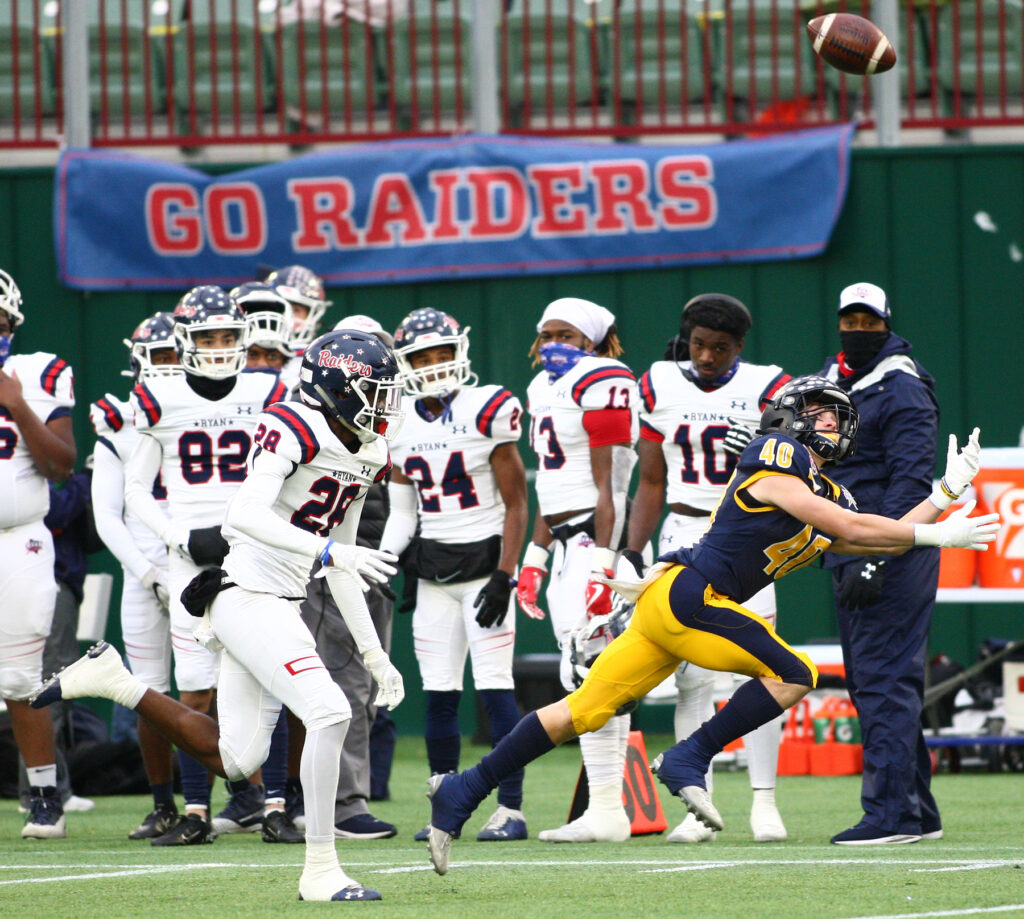 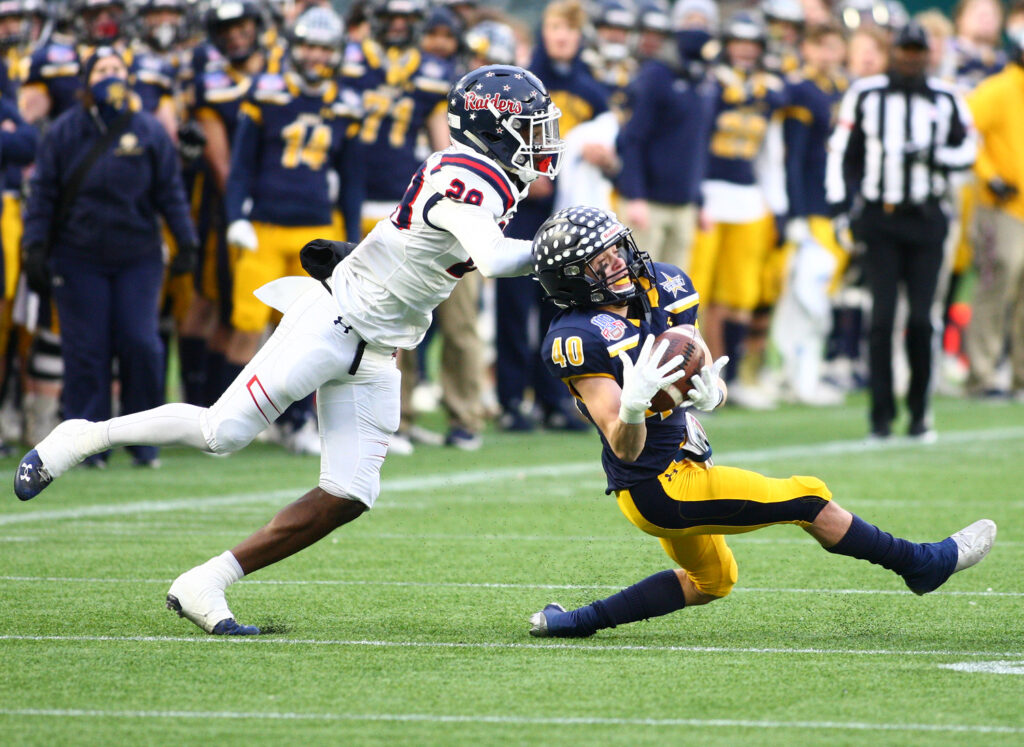 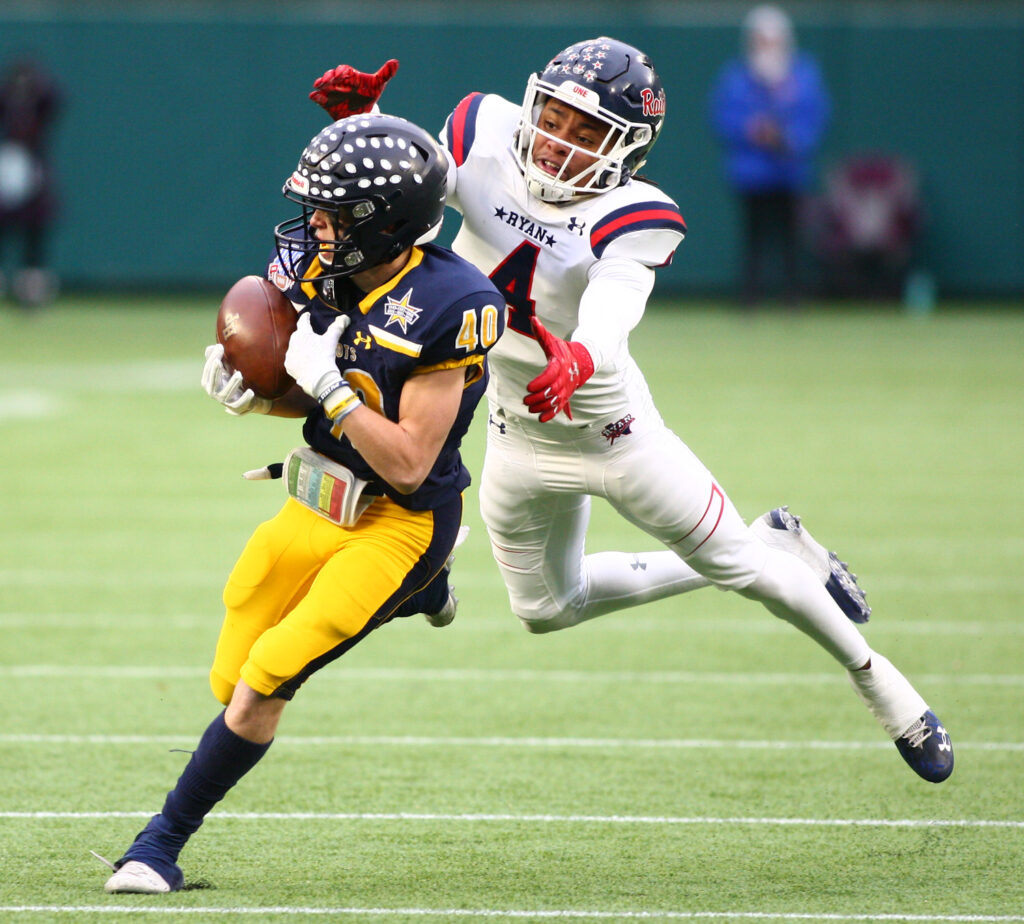 The Scots started by going three-and-out in just 21 seconds, and the Raiders (13-0) took an early 14-0 lead before HP even secured a single first down.

HP’s only points came on its next possession, an impressive 79-yard drive capped by a 29-yard touchdown pass from Brayden Schager to Crockett Corwin.

The final three quarters were a defensive struggle, with the only points coming on a 34-yard field goal by Ryan’s Clayton Roblyer as the first half expired.

In the scoreless second half played in a cold drizzle, the Raiders went into ball-control mode, draining valuable time and keeping the ball away from Schager and the Scots.

The loss overshadowed another excellent performance by the HP defense, which contained a Ryan attack that has averaged almost 50 points per game this season.

The Scots consistently pressured the quarterback, resulting in four sacks before halftime. And in the second half, they intercepted passes on back-to-back Ryan drives. Walker Cobb grabbed a tipped throw in HP territory late in the third quarter, and Patrick Turner picked off a pass early in the fourth.

Yet the Scots couldn’t take advantage of their scoring opportunities. They had a field goal blocked in the first half, and a fourth-quarter drive reached the Ryan 23 before stopping on fourth down.

HP drove into the red zone with under two minutes remaining before Garyreon Robinson intercepted a pass for the Raiders to squelch the threat.

“I thought we were going to get something going after we got a turnover on defense,” Allen said. “Give Ryan credit. They stopped us.”

The Scots managed only 88 yards of total offense in the second half. Schager, who was undefeated as a starter entering the game, was 13-of-33 passing for 165 yards. He surpassed the 3,000-yard plateau for the season.

Grayson Schrank caught three passes for a team-high 79 yards. However, HP was limited to 64 rushing yards on only 15 attempts.

Henigan, a Memphis signee, completed 17 of 28 tosses for 260 yards. Bowman’s tally of eight receptions for 136 yards came entirely before halftime. Kalib Hicks did most of the damage on the ground, with 19 carries for a game-high 92 yards.

Still, the Scots showed remarkable resilience during a year filled with obstacles. They posted double-digit wins for the eighth consecutive season and claimed a sixth straight district title, among other accomplishments.

“You play as long as you can, and when you play a team that has a better night than you did, you’re eliminated,” Allen said. “We had a great season — unlike any we’ve ever had. These guys exceeded my expectations, and this senior class will be long remembered.”