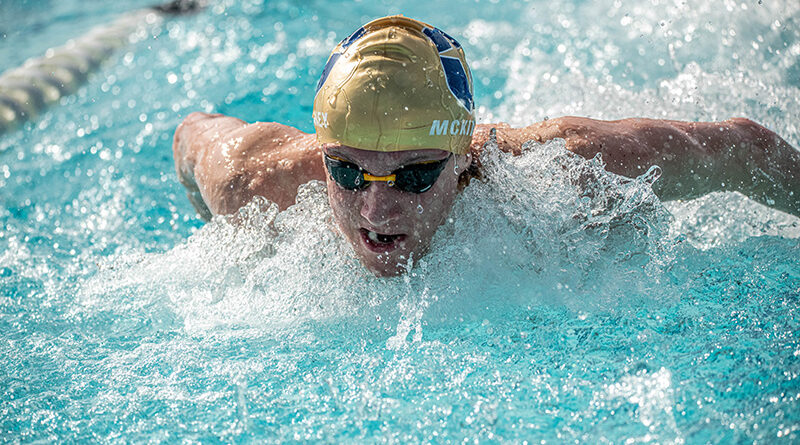 When he arrived at Jesuit as a freshman, Will McKinney scoped out the school’s swimming records.

He picked out the 500-yard freestyle — the longest race of them all. That was the one he wanted to break.

It took more than three years, but McKinney accomplished his mission earlier this fall, during a dual meet at Highland Park when he lowered the mark by finishing in under 4 minutes, 40 seconds for the first time.

After focusing on distance swimming as a freshman, McKinney gradually lowered his time before plateauing. His solution? Specialize in other strokes instead.

“I’ve been able to expand my range pretty well,” McKinney said. “[Butterfly] was a really rough stroke for me when I was younger. I was tired of being terrible at fly, so I spent a lot of time watching Michael Phelps and other fly swimmers to figure out what they’re doing, and I’m not.”

He dropped six seconds off his best butterfly time in a year. Last year, he concentrated on breaststroke and individual medley, the latter of which Jesuit head coach Doug Moyse said might be McKinney’s best event.

“He likes to train in the different strokes,” said Moyse, who coached McKinney on the Dallas Mustangs club team in middle school before the duo reunited at Jesuit. “He would keep changing his specialty. He’s continued to progress as his volume has increased.”

When his senior year began, however, time was running out. McKinney never lost sight of the 500 free goal — just temporarily delayed it.

“Mentally, it helped so much,” he said of the break. “I knew I could get the record.”

As the son of a former SMU standout, McKinney has been immersed in swimming since he was very young. That passion prompted The Real Splash Brothers, a YouTube channel devoted to objectively covering the sport at the high school and college level.

The name might be an inside joke, but the channel itself is not. McKinney and fellow swimmer, Mithuun Ramesh of Prosper, launched the venture after struggling to find video of past state championship meets online.

“[I figured] maybe I could film the races and post it,” said McKinney, a Park Cities native. “After that, I decided to cover every meet I go to. My parents help record the races, and I upload it.”

During his freshman year, he covered the state meet as a freelance journalist for a swimming website. McKinney later created an Instagram account, made some mixtapes, and expanded to include coverage of meets outside the area and legitimate interviews with high school and college swimmers.

He’s already verbally committed to Boston College, where next year McKinney plans to major in communications. He hopes to set more records in the pool, as he’s recording more videos out of it.

“It’s something that I love,” he said. “I hope in the future it continues to grow.”