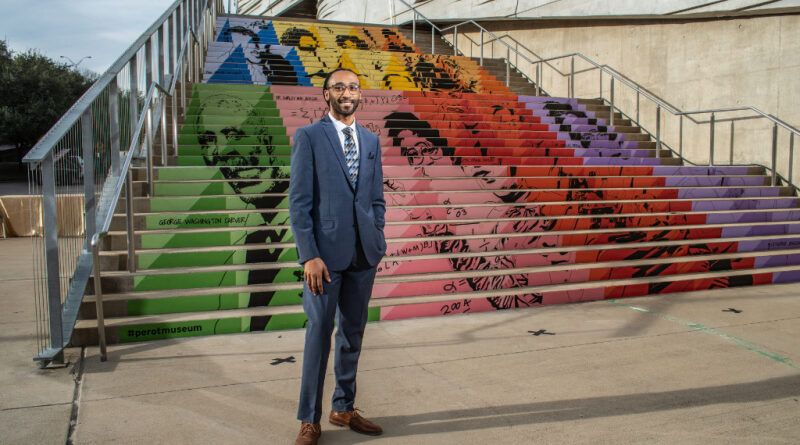 Calling it a “bold and inspiring tribute to African American leaders who made momentous contributions to science,” the Perot Museum of Nature and Science, in partnership with the African American Museum, Dallas, announced that local architect and emerging artist Daniel M. Gunn is the winner of the Staircase Project design competition.

In addition to a $5,000 prize, Gunn’s larger-than-life image, titled GIANT STEPS – Celebrating Extraordinary Achievements of African-American Leaders in STEM, has been installed on the Perot Museum’s multi-story, outdoor staircase facing Field Street. The Staircase Project is presented by Kroger.

“Far too often the important contributions made by African Americans to the advancement of STEM have been untold, unheard and unseen. This magnificent design from Daniel M. Gunn shines a much-needed light on these hidden figures,” said Dr. Linda Silver, Eugene McDermott Chief Executive Officer. ”Giant steps often begin by first taking small steps, so we encourage everyone to climb these stairs and find inspiration for the future through learning about the past.”

Last fall, the Perot Museum and African American Museum conducted a call for entries to create a vibrantly colored, eye-catching design that celebrates African-American leaders in science – from history and modern day – who have made significant contributions to STEM (science, technology, engineering and math). To spotlight the artistic talent in the Dallas/Fort Worth region, the Perot Museum opened the competition to African-American creative designers who reside in North Texas. Entries were judged by a diverse, blue-ribbon panel comprised of regional leaders representing the arts, education and STEM business communities.

The creative design – which has been reproduced and professionally installed using weatherproof, vinyl materials – will remain in place through Memorial Day.

Gunn is a 36-year-old architect employed at Oglesby Greene Architects in downtown Dallas. Born in Alabama, he has lived in New Jersey as well as Louisiana, where he graduated with an architecture degree from Louisiana Tech University in 2008. He picked up a pencil at age five and has been drawing and painting ever since.

“When I’m not busy designing buildings by day, I’m honing my skills with the paintbrush on canvas by night,” he said.

While Gunn chose to portray past and present African-American leaders in STEM who have accomplished amazing feats in their respective fields, he also featured two less obvious leaders.

“Architects Paul Revere Williams and Norma Merrick Sklarek were two trailblazers who paved the way for me and many other African-American men and women to pursue careers in architecture,” said Gunn. “I was compelled to include these significant figures because African Americans are not very visible in the field of architecture.”

“Kroger is proud to partner with the Perot Museum of Nature and Science and the African American Museum for this ground-breaking project, which not only recognizes those in the African American community who have made significant contributions in science, but also highlights the talents of a North Texas African American artist,” said April Martin, Community Relations Manager, Kroger Dallas Division. “As a company, Kroger has made a commitment to foster a culture that empowers everyone to be their true self, inspires collaboration and feeds the human spirit.  Supporting this project further solidifies this commitment, as we strive to utilize our resources to substantially and positively impact our community.”

Charged with the challenge of selecting a winner were panelists Dr. Lauren Cross, program coordinator and assistant professor, interdisciplinary art and design studies, College of Visual Art and Design at the University of North Texas; Byron Sanders, president and CEO, Big Thought; and Arthur Simmons, quality systems management, processes & analytics, Texas Instruments. Dulaney and Silver also served on the panel. Entrants were asked to submit an image along with detailed graphic design files, an artist statement and a short bio and photo. Finalists also participated in interviews with the panelists.

The Perot Museum is located at 2201 N. Field Street in Dallas, Texas. For details and visitor information, go to perotmuseum.org.