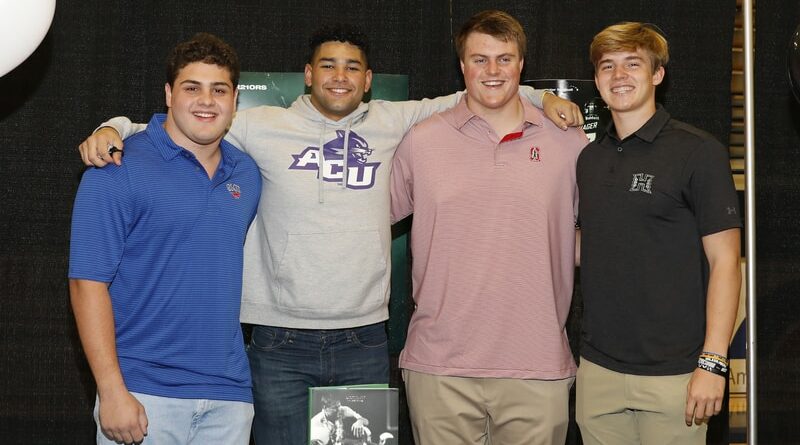 Schager verbally committed to play for the Rainbow Warriors last summer, before he had even started his first varsity game. He followed through by signing with Hawaii on Wednesday.

As the dual-threat quarterback amassed big numbers during an unbeaten regular season for the Scots, other suitors came calling. But when he visited the campus in Honolulu last week, it only reinforced what he already knew.

“Staying at Highland Park was a great decision I made. It was the right thing to do.”

“Going out there is pretty cool,” Schager said. “I’m excited. It’s a four-year paid vacation, is what my parents joked with me. I’m not going to be bored.”

However, his time on the islands will be about more than sun and surf. He will join a program on the rise, with several Texas connections on the coaching staff and on the roster. Hawaii head coach Todd Graham hails from the Dallas area, and eight other players with ties to the state also signed with the school on Wednesday.

Schager passed for 3,102 yards and 24 touchdowns in leading the Scots to an 11-1 record during an abbreviated season that ended with a loss to Denton Ryan on Jan. 1 in the Class 5A Division I state quarterfinals. He also ran for nine scores.

He likely could have transferred and started elsewhere for multiple seasons, but he stayed with the Scots and waited his turn as the varsity starter. Now he hopes his devotion to Hawaii throughout the recruiting process will likewise be rewarded.

“I’m big on loyalty. [Hawaii] gave me the opportunity to show them how committed I was,” Schager said. “Staying at Highland Park was a great decision I made. It was the right thing to do.”

Schager was recognized during a ceremony on Wednesday at HP, along with a trio of teammates who will join college rosters as preferred walk-ons: offensive linemen Will Gibson (Stanford) and Sam Morse (SMU), plus defensive lineman Isaiah Pedack (Abilene Christian).

Gibson will join fellow Scots offensive tackle Jack Leyrer with the Cardinal. Leyrer signed during the initial signing period in December. Both were critical components on a unit that dominated at times this season for HP.

“It’s such a great opportunity and someplace where I really think I can thrive,” Gibson said of Stanford. “Being so far from home, it’s awesome to have someone you know out there.”