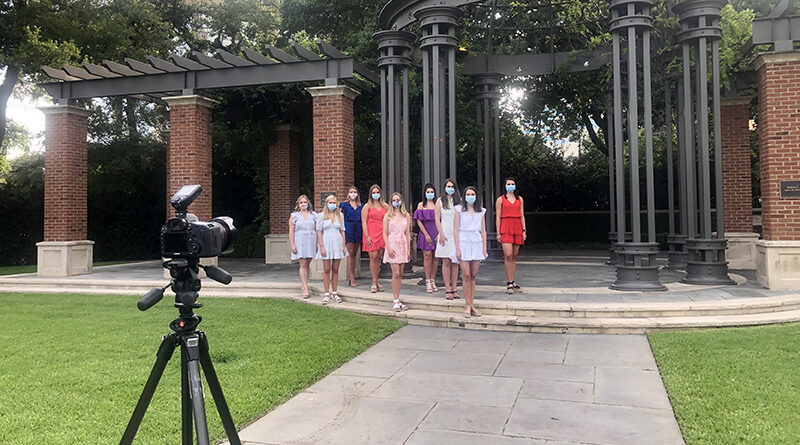 The ball is canceled, but the DSOL debutante photo goes on

Debutantes will get another year to perfect their “Texas Dip,” but just because the Dallas Symphony Orchestra League’s annual presentation ball became a casualty of the pandemic didn’t mean that the organization wouldn’t mark the occasion somehow.

“The decision was not made lightly. Initially, the date was changed from the historical February date to June 12, 2021, as we hoped the pandemic would be under control and this memorable event could still be held with a few modifications,” said ball chair Mari Epperson. But as case counts continued to rise, Epperson said that the organization made the “difficult conclusion” that the ball would need to be canceled.

But the traditional photo, taken by Rick Bettinger with Gittings, was still something the organization wanted to do – if they could do it safely.

What resulted is a snapshot of a pandemic, too, with debutantes dressed in their Sunday best, masked and spaced just so.

Normally, the photo would have happened this summer, during the traditional announcement party at Stanley Korshak. But when it became clear that the DSOL would need to pivot, Epperson called Bettinger.

“To create the group (shot), we knew we would have to blend the two images together.”

“Mari Epperson, The DSOL 2020 Ball Chair contacted me to see if I had any ideas on how we could accomplish the group shot with the challenges we had,” he said. “I did and after discussing all of our options we decided to locate an elegant outdoor option that would provide the necessary social distancing that was needed.”

The Gittings team chose the gazebo at Turtle Creek park next to Arlington Hall and inviting the debutantes to come over a two-day period.

“To make sure the faces were lit properly, wireless studio strobes were set up with precise power settings noted. The placement of the lights was also measured and recorded. The camera was set with tripod height noted and camera settings recorded. The position of the camera was carefully marked.”

The crew spaced the debutantes carefully, and took pictures with the masks, and then allowed the girls to briefly remove their masks for additional photos.

“At the studio we selected the best images from both days and sent to our Gittings artist to seamlessly join the two together,” Bettinger said, adding that the Gittings team has been able to do similar photos for other local nonprofits, and for families.

This year’s debutantes will be invited to join the 2022 slate of participants next year. This year would’ve been the 35th anniversary of the traditional event, which has raised more than $12 million for the symphony’s education and outreach programs.