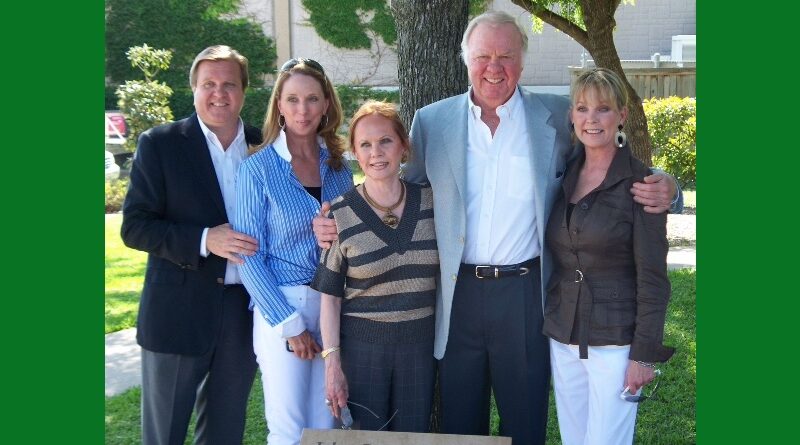 John Roach and family in May 2008 during a brief ceremony at Germany Park to unveil the plaque that details the naming of the track there in his honor. Photo: City of University Park.
Community In Memoriam Obituaries Park Cities Preston Hollow
February 24, 2021February 24, 2021 Rachel Snyder 0 Comments

Former Cowboys quarterback and University Park mayor from 1988 to 1992 John Roach died Feb. 18 at 87, but leaves an enduring legacy.

Roach graduated from Highland Park High School, where he lettered in track, basketball and football, in 1951.

He earned a scholarship to play football at SMU, where he played defensive back, punter, and quarterback. While at SMU, he met and married his wife, Patsy McKenzie.

In 1956, Roach was drafted in the third round by the Chicago Cardinals, where he played for one year before serving in the U.S. Air Force for two years. He then played for the St. Louis Cardinals as their starting quarterback for one year before playing three years with the Green Bay Packers, who won two NFL Championships under Vince Lombardi in 1961 and 1962.

In 1964, the Dallas Morning News reports, he retired from professional football and started an investment firm.

Roach remains the only person to have played football for the Highland Park Scots, SMU Mustangs, and Dallas Cowboys.

In 2006, he was selected as one of three distinguished alumni from Highland Park High School, and in 2008, a community track at Germany Park was christened the John Roach Track in his honor.

His family asks those who’d like to contribute in his honor to support the Highland Park Education Foundation or the charity of their choice.