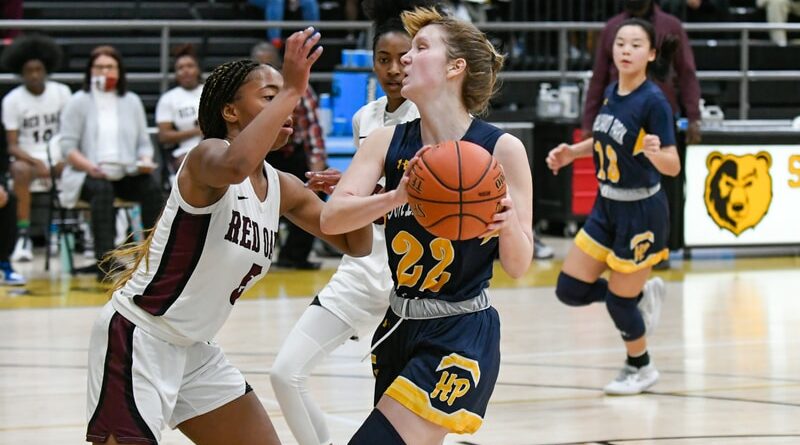 Between its district games and two postseason contests, Highland Park hadn’t been challenged much in the past two months — before Wednesday.

In a seesaw battle, the Lady Scots saw a late rally fall short during a 54-48 loss to Red Oak in the Class 5A Region II quarterfinals. Two days after advancing to the third round of the playoffs for the first time in nine years, HP’s season is over.

Red Oak’s tandem of post Aniyah Johnson and guard Breanna Davis proved too much for the Lady Scots (22-7), whose 12-game winning streak was snapped.

Aniyah Johnson, a University of North Texas signee, keyed a decisive 9-0 run that gave the Lady Hawks (24-5) a 44-35 advantage early in the fourth quarter.

After a scoreless stretch of more than four minutes, however, HP battled back. Consecutive steals and layups by Madison Visinsky and Bri Doyle trimmed the margin to 48-45 with 1:23 remaining. But the Lady Scots couldn’t get any closer down the stretch.

“They executed the game plan. What more can you expect?” said HP head coach Nicole Fleming. “To be down, and then dig back in like they did, that says a lot. I’m really proud of them.”

Trailing for most of the game, HP took a brief 33-32 lead midway through the third quarter on a 3-pointer from the wing by Vivian Jin. The sophomore guard finished with a team-high 12 points including three triples.

Visinsky, one of four seniors on the HP roster, scored eight of her 10 points in the fourth quarter. She played her final game in a Lady Scots uniform, as did Doyle, Cate Rhodes, and Ella Patterson.

HP will return three starters and several key contributors next season from a close-knit team that Fleming said demonstrated tremendous resilience and sacrifice.

“Those seniors left a legacy and a standard to live up to,” Fleming said. “Once we broke through and made it to the third round, we have that hunger and that experience.”

Davis poured in 26 points to lead all scorers, including a handful of clutch free throws in the final minutes. Johnson controlled the paint with 20 points, 12 rebounds, and a few blocked shots.

Red Oak — whose boys team fell to HP on Tuesday — became the first team to surpass the 50-point barrier against the Lady Scots since Dec. 30. The Lady Hawks will head to the regional semifinals for the third straight season.