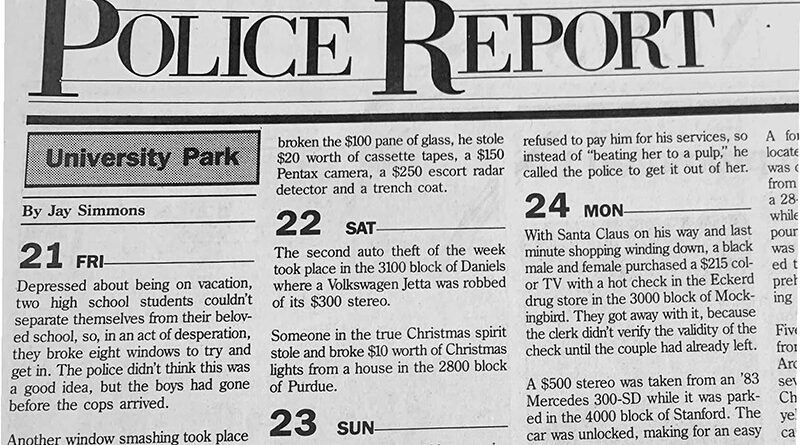 Where else but in the pages of Park Cities People, Preston Hollow People, and peoplenewspapers.com can you read crime reports like this one from September 2019?

Happy birthday to you! Bistro 31, we’ll do. Hit and run, leave a present: a damaged Honda for you. The disappointed Dallas woman reported that the anonymous “gift” to her 2018 Accord came between 5 and 10:34 p.m. Sept. 20 at Highland Park Village.

“None of the other newspapers where I’ve worked would approach them like this,” Editor William Taylor said of People Newspapers’ crime reports. “I’d be open to changing them if enough of our readers asked for that. However, the tradition adds to our newspapers’ distinct character.” 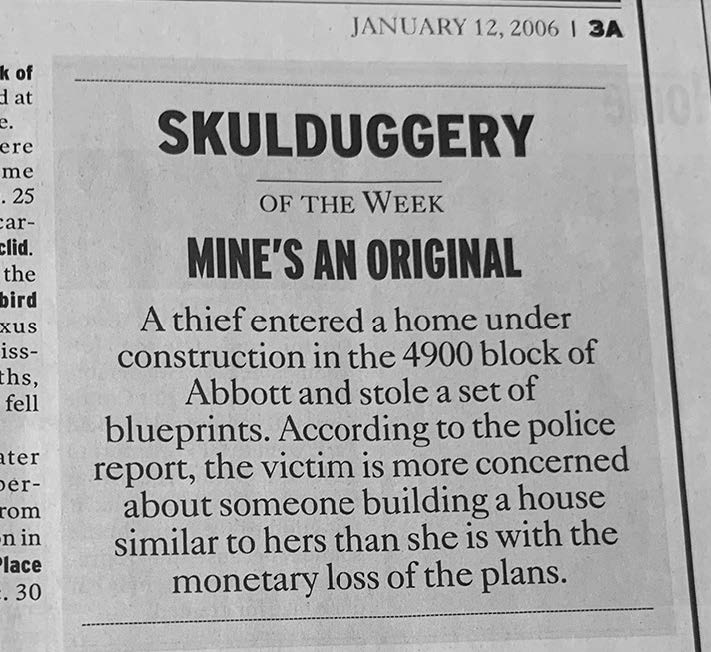 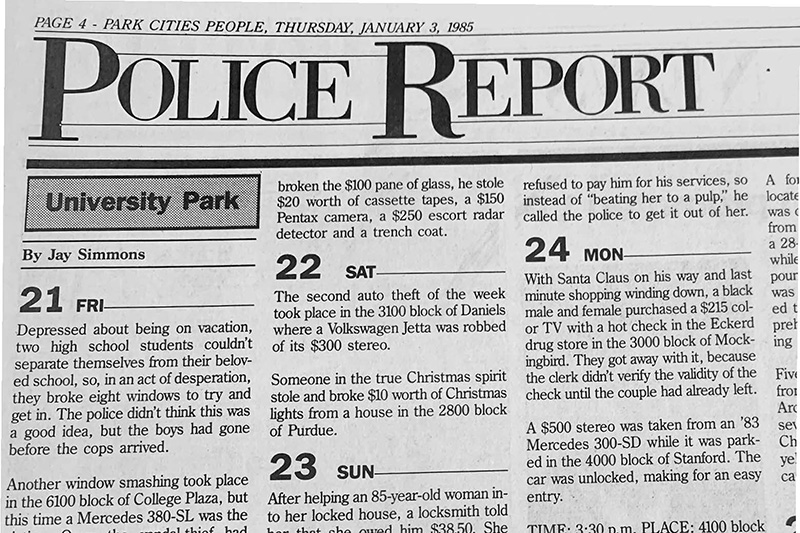 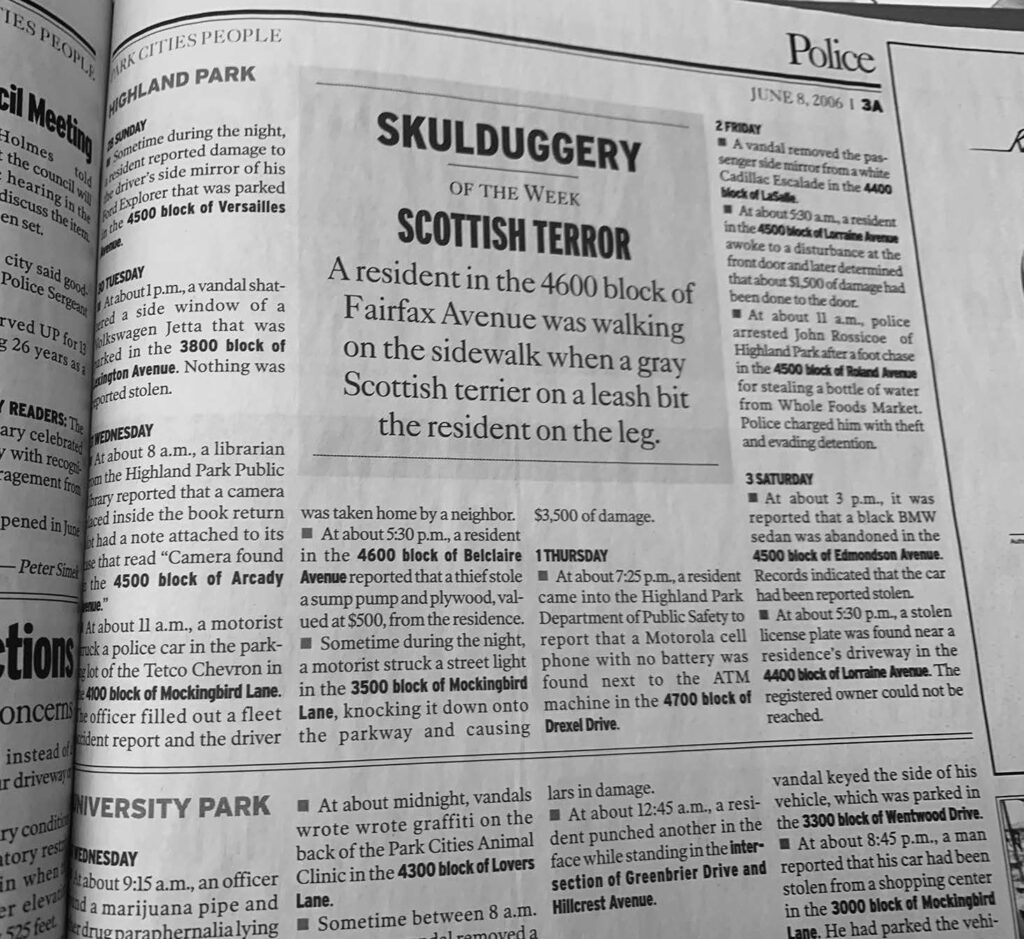 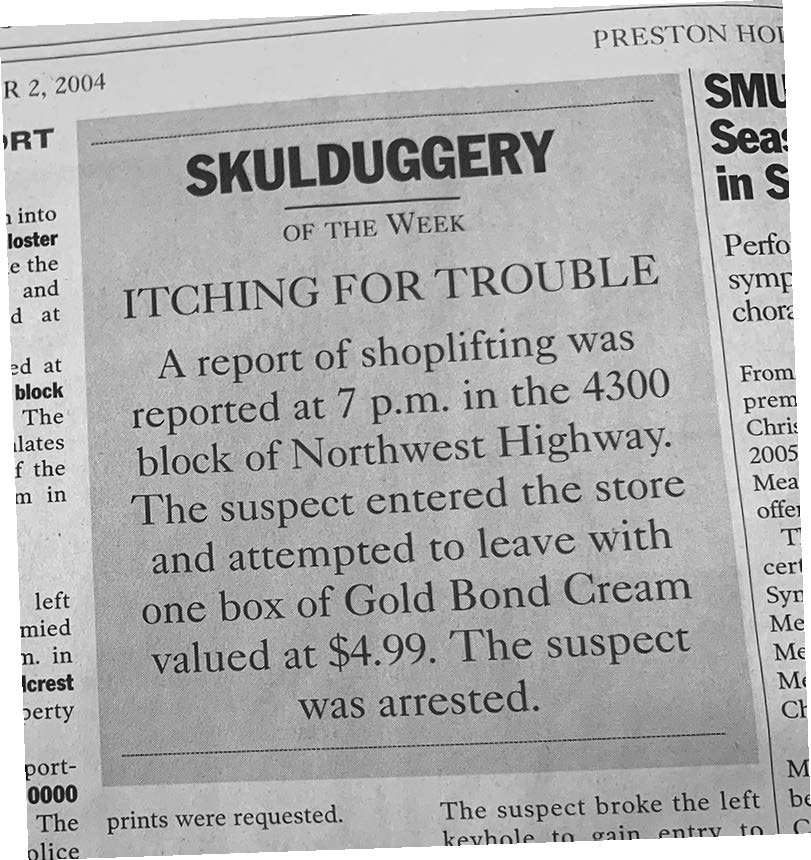 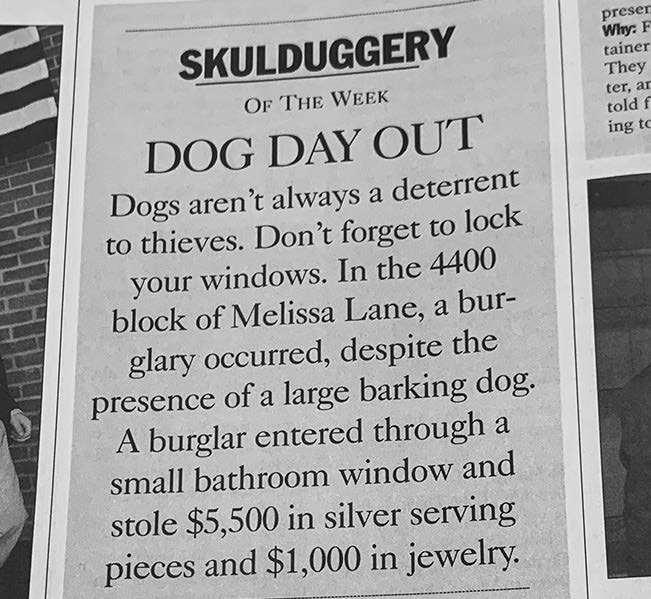 “He’s the guy that made it funny,” Dooley said. “It was pretty black and white crime reporting, but because some of the offenses were so outrageous or so boring or funny, he put a spin on it where it’s almost like a comedian writing the police report. He didn’t change the facts, but the way he reported it made it really tongue-in-cheek and funny.”

Glenda Vosburgh, a former managing editor, noted that the papers approached violent crimes such as murder with appropriate seriousness.

But much of the crime in the early days – as it is now – involved auto break-ins and criminal mischief.

“He didn’t change the facts, but the way he reported it made it really tongue-in-cheek and funny.”

“It was boring,” Vosburgh said. “If you wrote it straight up, it would have been dull.”

Editor Reid Slaughter, she said, “wanted to make it funny. He wanted us to have a little fun with it, and so we did.”

“Over the years, when we would hire marketing firms to compile readership stats to share with potential advertisers and agencies, the Police Report page was always the ‘most read page’ by both men and women,” Hurmis added.

The “Skulduggery” feature became a regular feature of the crime report page after Wick Allison bought the newspaper, adding it to the D Magazine family of publications.

But not everyone is amused.

Lucy Washburne of Highland Park complained in a Letter to the Editor in the February issues that calling a criminal a “ne’er do well,” “rogue,” “troublemaker,” or “scoundrel,” instead of “what these people really are – thieves and robbers – gives the false impression that the crimes committed aren’t real crimes.”

Gwen McKinney of Highland Park responded with a letter saying she agrees with Washburne.

“I thought the police log was serious reporting,” McKinney wrote. “Now it appears to be very much ‘tongue-in-cheek.’ I hope you rethink this approach.”

SPEAK UP: Visit peoplenewspapers.com and let us know whether the crime reports’ humor is too much, too little, or about right. 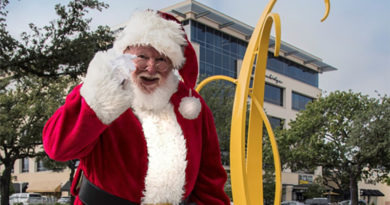 Visit Santa at The Plaza this December 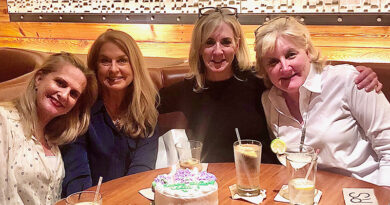 2 thoughts on “Skulduggery of the Decades”