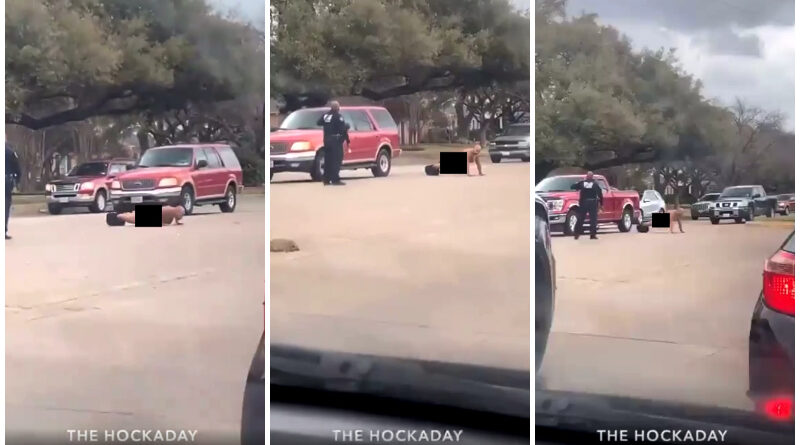 Naked, according to most agreed upon definitions, means someone is unclothed. Nekkid, however, is naked, but you’re up to shenanigans — ask any Southern grandmother.

Last week, a couple of readers sent us a copy of a Snapchat video that appears to show what is definitely a nekkid man, doing pushups near the intersection of Forest Lane and Welch Road, adjacent to The Hockaday School.

The 10-second video has its ups and downs, and appears to also show a Dallas police officer directing traffic while the individual engages in au naturel calisthenics. After all, with his trousers around his ankles, our stark naked fitness enthusiast wouldn’t be running away very quickly.

Snapchat apparently pulled the video (because of, you know, naked man pushups), so that’s a dead end as well. Sources say that it appears to occur during carpool for Hockaday.

However, Dallas Police Department spokesman Sgt. Warren Mitchell was able to fill in some more of the details, and was able to tell People Newspapers that the incident happened around 2:30 p.m. on March 12.

“We are aware of the incident and took the individual into custody for possession of a prohibited weapon,” Mitchell said. “The suspect, 33-year-old James Abram, was involved in a one car accident and subsequently exited the vehicle and removed his clothes.”

Mitchell said that Abram was then arrested and taken to an area hospital. After he was released, he was transported to jail for possession of a prohibited weapon.

There are likely some readers who saw it all – and one reader may have been the Snapchat videographer. If that’s you, shed some light (but please, not your clothes) in the comments, or email [email protected]