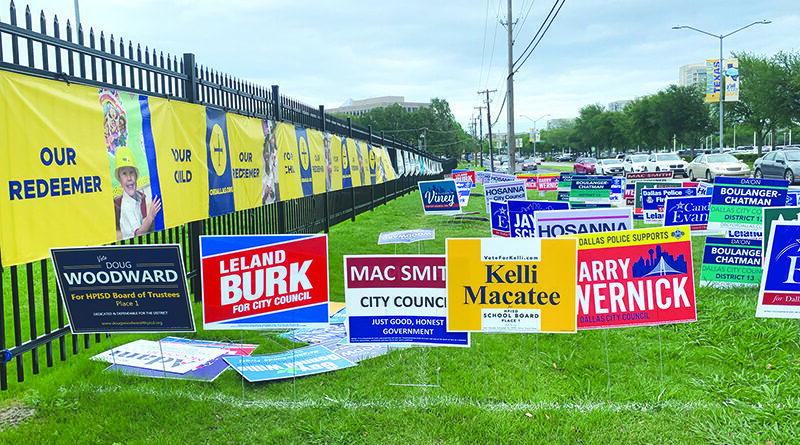 A total of 8,354 votes were cast in the Highland Park ISD Place 1 race to replace board president Jim Hitzelberger. Photo: Rachel Snyder
News Park Cities
May 24, 2021May 24, 2021 Rachel Snyder 0 Comments

After a hotly-contested Highland Park ISD Place 1 trustee race, one thing everyone seems to agree on is that the election raised important issues.

Doug Woodward replaced board president Jim Hitzelberger after winning 58% of ballots (4,845 votes) to Kelli Macatee’s 42% (3,509). About 10% of registered voters cast ballots in the May 1 elections.

“It was certainly a difficult path,” Woodward acknowledged of the election, which generated national headlines about fliers from political action committees with negative messaging supporting his opponent. “We’ve got to find a way to figure out what are the valid (concerns) we need to address.”

Woodward added that he believes the fliers led to an increase in support for him. He received 50% or more of the vote in each precinct.

“The fliers were offensive not only to the vast majority in our community but also to many beyond our town borders as well,” a post on his campaign Facebook page reads. “When the story of the opposition’s fliers hit Dallas radio and national news, I received numerous donations from individuals outside our community – people that I have never met nor spoken to.”

Though losing at the ballot boxes, Macatee sees a victory in drawing attention to issues.

“We raised awareness and asked many, many important questions worth asking,” she said. “Incredibly gifted people came together who are hungry for that which is good and right and just. We have only just begun our efforts to engage locally.

“I wish my opponent all the best as he moves forward in this important role,” she added.

Eric Swanson, who supported Macatee, said he expects the increased interest in school board elections and scrutiny of board members seen this year to continue.

“I expect that scrutiny of and interest in both current board members and future candidates will increase substantially — the days of the board member who rubber-stamps the decisions of district employees with little public scrutiny are gone forever,” Eric Swanson said. “Ultimately, this should serve our children well and hopefully cause board members to remember better that they represent the community that elected them. Going forward, I hope that I hear more responsive conversation about and see direct action on constituent demands. I will certainly be demanding it.”

Macatee hadn’t filed a final campaign finance report by press time but said she planned to take time to decide what to do with her excess campaign funds.