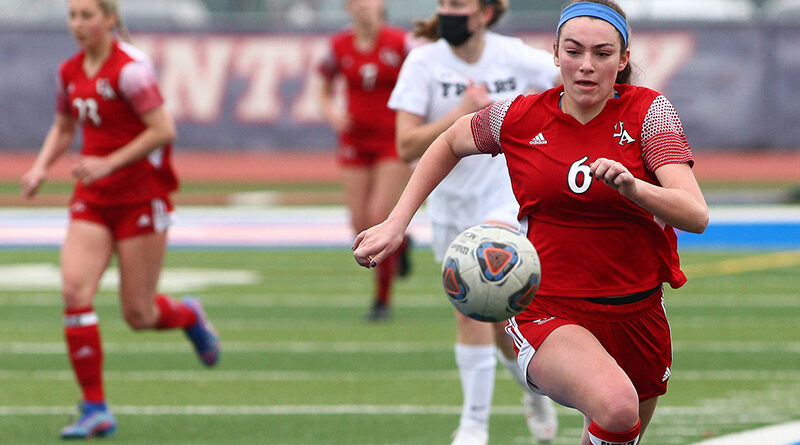 Kylie Dobbs was aware of the milestone when she took the field on March 5, but she had more important accomplishments on which to focus.

Nobody in the storied history of the Ursuline soccer program — which includes 28 state titles and numerous Division I college signees — had ever scored 100 goals in a Bears uniform. Heading into this season’s TAPPS 6A championship game against Houston St. Agnes, Dobbs had 99.

The senior’s historic first-half goal was the game-winner, and she later added three more for good measure, finishing her career with 103. Ursuline’s state title cemented Dobbs’ status in Bears lore.

“For her to be the first player to score 100 goals, really says something with all of the talent that’s come through the school,” said Ursuline head coach Darrin Hedges. “Our entire team took her getting to 100 as a personal goal. We knew we would succeed as Kylie succeeded.”

Dobbs finished her senior season with 49 goals in just 20 games. But the last four will forever be the most memorable.

“For my team, I wanted to score. Then I just wanted to push for another, and another. After the first one, they started rolling in,” she said. “As the season went on, [100] started getting within reach. It wouldn’t have happened if the team hadn’t really pushed and helped me get there.”

Hedges, a local coaching veteran who just wrapped up his second season at Ursuline, said Dobbs is one of the most gifted offensive players he’s ever coached.

“She can score several different ways,” Hedges said. “She can score with speed and has got a rocket of a left foot — whatever it takes to put the ball in the back of the net.”

After the season, Dobbs signed late in the recruiting cycle to play collegiate soccer at the University of Missouri, which will enable her to pursue journalism and eventually sports broadcasting.

“It all worked out by staying patient,” she said. “I wanted to play somewhere that I would be happy at the school even without soccer. It was meant to happen.”

“The environment of Ursuline soccer doesn’t compare to anything else. It’s a pride thing. You want to work hard for all the girls ahead of you, or behind you, or next to you,” Dobbs said. “I’m happy that I could leave my mark on something that has meant so much to me.”