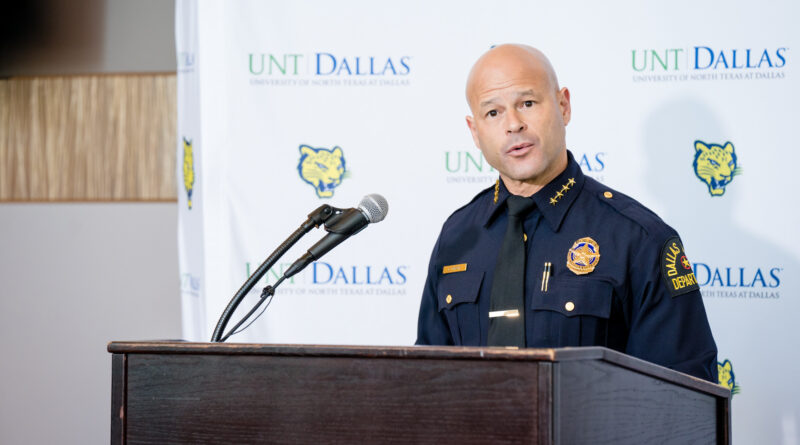 The ABLE training program, funded through a $300,000 grant from the Dallas City Council in January, is administered by the Caruth Police Institute (CPI) at the University of North Texas at Dallas.

During a briefing last week at UNT Dallas, Dallas Police Chief Eddie Garcia, along with Caruth Police Institute leaders and Dallas Assistant City Manager Jon Fortune, reported the program is fully underway, and the entire force of approximately 3,200 officers – from chiefs and patrol officers to new recruits – is expected to be trained by early 2022.

“The ABLE peer-intervention program is coming at a critical time in our society. It builds upon the existing training that DPD is already doing, and it can only make us better prepared to serve our community,” said Garcia. “I’m proud that the Dallas Police Department is the first major-city police force in Texas to fully embrace the program, and I encourage other law-enforcement agencies to take advantage of the training.”

The Caruth Police Institute is the only entity in Texas to offer the national training, which provides police officers with education, tools, encouragement and support to intervene on the public’s behalf in an effort to prevent their colleagues from committing acts of serious misconduct. The training also promotes self-care and health and wellness strategies so that law enforcement officers can reduce stress and focus on making positive connections in the community.

In March, these educators began training the command ranks of major, lieutenant, sergeant, and sergeant corporal, and, to date, approximately 800 officers have been trained. In July, CPI will launch training for its first classes of field training officers and their cadets.  Within a year of the initial training date, all of the department’s officers and cadets will receive this evidence-based active bystandership education designed not only to prevent harm, prevent mistakes and promote wellness but to change the culture of policing.

By adopting the ABLE training module, the Dallas Police Department has now joined a select group of more than 70 law enforcement agencies and statewide and regional training academies from across the country that have demonstrated a firm commitment to transformational law enforcement reform with backing from local community groups and elected leaders.

“We are grateful the Dallas City Council recognized the importance of this program and extremely fortunate to have the expertise of the Caruth Police Institute at UNT Dallas right here in our city,” said Fortune. “My hope is, that through this training and other initiatives Chief Garcia is leading, that Dallas Police Department becomes a model for law-enforcement agencies across the county.”

CPI is known for its commitment to customized leadership courses and training and research for law enforcement and public safety agencies. Since 2008, the Dallas-based institute has trained members from 100+ agencies, including law enforcement, fire and rescue, city employees, county prosecutors, and federal investigators.

Their history of professional development seminars and law enforcement training includes more than 30-course offerings on topics ranging from implicit bias and emotional intelligence to leadership and wellness. This makes CPI uniquely positioned to administer the ABLE training program.

“The Caruth Police Institute is proud to be the home of the Texas ABLE Center of Excellence. The Center demonstrates CPI’s commitment to continue providing premier consultation, leading-edge policy analysis, and meaningful training for law-enforcement agencies and officers across our state and the country,” said B.J. Wagner, executive director of the Caruth Police Institute at the University of North Texas as Dallas. “The ABLE Center advances our mission of shaping a more trusting and resilient public-safety climate, and we have an opportunity to demonstrate the impact of that right here in our home city with the Dallas Police Department.”

CPI not only plans to train members of the Dallas Police Department, but they also are working to strengthen community ties by seeking faith-based leaders, community members, UNT Dallas faculty, law enforcement leadership, and others in academia to work together and serve on the Caruth Police Institute ABLE Advisory Committee and as ABLE Ambassadors.

Input and community outreach from local leaders, combined with the expertise of criminal justice and law professors, will strengthen the academic aspect of the training and promote a diversity of ideas.

Learn more about the Caruth Police Institute at the University of North Texas at Dallas at cpi.untdallas.edu.