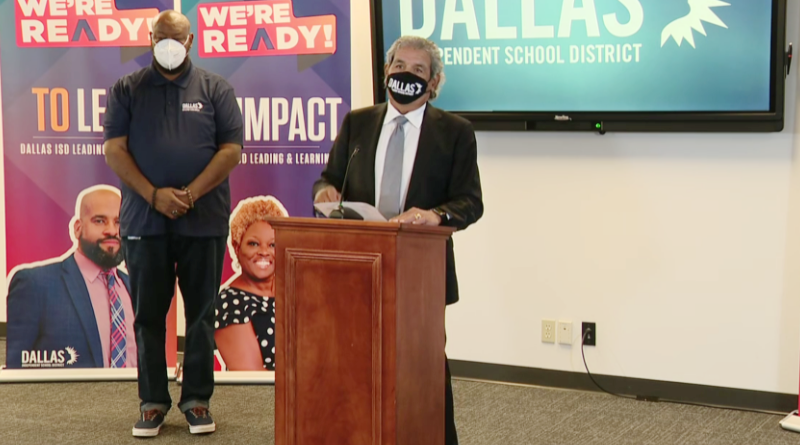 Despite Gov. Greg Abbott’s mandate that schools and other entities can’t require masks, Dallas ISD announced Monday that, effective Tuesday, masks would be required for all staff, students, and visitors.

“Despite whatever authority the governor has, he is responsible for the state of Texas, I am responsible for Dallas ISD,” district superintendent Michael Hinojosa told reporters in a press conference shortly after the district made its announcement.

Last month, Abbott issued an executive order reiterating that he wouldn’t be mandating masks, but he also wouldn’t let local authorities seeing a surge in cases mandate them, either.

The district’s message to parents cited “CDC recommendations and the red level alert issued by Dallas County based on the rise of hospitalizations among all age groups,” as the impetus behind the move.

Hinojosa said that over the past 72 hours, he had gotten a lot of emails about the issue, and only recalled one that asked him not to require masks. The rest were asking for mask requirements and a virtual option.

In their most recent report, researchers at UT Southwestern said that the fastest-growing age group for hospitalizations is the 18-49-year-old group, but the infection rate is rising among every age group, particularly in groups that have low vaccination rates.

That would include ages 12 and younger, who are too young to have the immunization available to them.

“We’re in a situation that has gotten significantly more urgent,” Hinojosa said. “If we can save one student, one teacher, from going through this awful pain, we can get them more prepared to learn.”

Hinojosa said he’s also working on incentivizing vaccinations, and other potential ideas to improve the odds that outbreaks on campuses are fewer, but that masking is the first step.

“We are behind,” Hinojosa said, referring to the academic hit the district took during the rocky pandemic school year last year. “We are exploring options even if we don’t have funding for it.”

Dallas is the first district to run counter to Abbott’s order, but it likely won’t be the last. Houston ISD will consider it at its board meeting this week.

“All of this is going to play itself out, and we’re not going to be the only ones that are taking this action,” Hinojosa said.

When asked who would pay the $1,000 fine Abbott’s order assesses for going contrary to it, Hinojosa expressed some frustration, saying the order doesn’t even really say how the fine is assessed — whether it’s a one-time fine, or daily.

“I’m accountable, if I have to pay it out my pocket, or if the district does, we don’t know,” he said. “I’d rather pay that consequence.

“That executive order is very loose, according to our attorney,” he said.

Over the weekend, the nonprofit Southern Center for Child Advocacy filed a lawsuit in Travis County against Abbott and the executive order.

“In the absence of a statewide mask mandate, the group seeks to give the power to enforce mask wearing back to local school districts, said Hank Bostwick, volunteer center coordinator and lawyer,” the Texas Tribune reported.