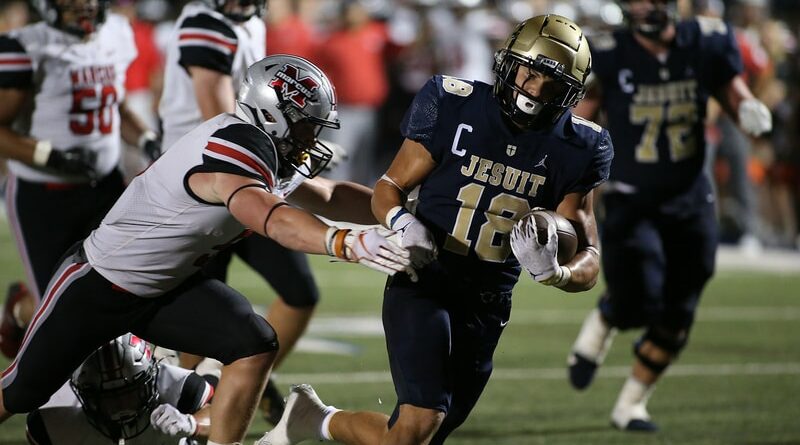 Judging from its rigid scheduling and usual win-loss trajectory over the past decade, Jesuit emphasizes finishing strong over starting fast.

But why not have both? With a 38-34 triumph over Flower Mound Marcus on Friday at Postell Stadium, Jesuit is 1-0 for the first time since 2015.

The Rangers avenged a defeat to the Marauders a year ago, and also helped ease the sting of an early playoff exit last December. In other words, the season-opening victory felt like a fresh start in multiple ways.

“Our seniors weren’t satisfied with last season. Our guys worked their tails off all summer, and they had this game highlighted,” said Jesuit head coach Brandon Hickman. “They played really hard, and I can’t be more thrilled with the effort they gave.”

Gage Roy threw for 234 yards and a pair of touchdowns, both to Hunter Krepp. And versatile Robert Fitzgerald, who is verbally committed to Northwestern as a safety, rushed for a game-high 72 yards and two scores on his 18th birthday.

That helped to offset the prolific Marcus passing attack, led by 6-foot-6 quarterback Jaxxon Warren, who passed for 407 yards — averaging more than 21 yards per completion — and four touchdowns to four different receivers. Dallas Dudley was his primary deep threat with nine receptions for 199 yards.

After the Marauders opened the scoring with a 56-yard scoring strike from Warren by Isaac Khattab, Jesuit responded with an impressive 14-play, 75-yard drive capped by a 1-yard Fitzgerald touchdown plunge.

Both of Krepp’s scoring catches, on plays of 45 and 15 yards, came on back-to-back possessions in the third quarter. The second one gave the Rangers a 35-27 advantage.

On the next play, Jesuit forced the game’s only turnover when Brady Kinzer recovered a fumble at the Marcus 9-yard line early. That led to a Cade Jordan field goal that gave the Rangers an 11-point cushion midway through the fourth quarter.

“We were putting some pressure on them, and making them get out of the pocket,” said Hickman, whose team will travel to Rockwall next week. “This win gives us good momentum going into the season.”

The Jesuit defense limited Marcus to just 20 rushing yards. Plus, the Marauders missed two field goals and an extra point in the first half.