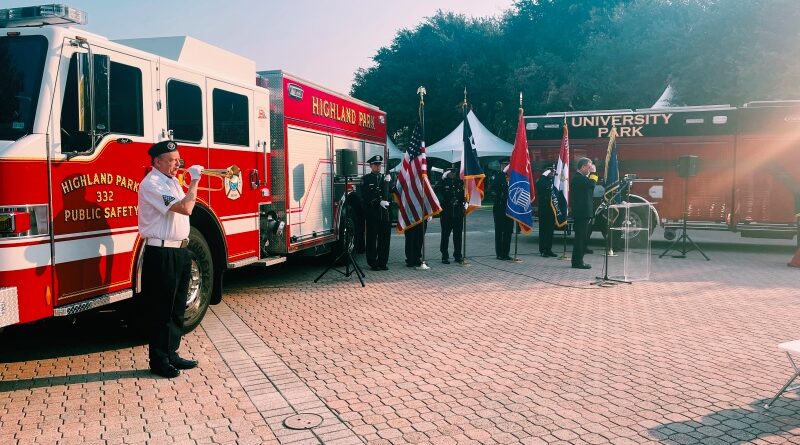 First responders from the Park Cities gathered Friday morning at the flagpole on SMU’s historic main quad — the same place SMU President R. Gerald Turner noted the community had gathered 20 years ago — to commemorate the 20th anniversary of the Sept. 11, 2001 terror attacks.

The first responders from the Highland Park Department of Public Safety, the University Park police and fire departments, and SMU police department, as well as community members participated in the combined honor guard and bell ceremony. The ceremony began with the posting of the colors followed by remarks from Highland Park Mayor Margo Goodwin, University Park Mayor Tommy Stewart, Turner, and UP Fire Chief Randy Howell. Howell’s remarks were followed by a ceremonial ringing of a bell in a signal of three rings three times each that “represents the end of our comrades’ duties and that they will be returning to quarters” to honor those killed in the line of duty.

“Those who have selflessly given their lives for the good of their fellow man, their tasks completed, their duties well done…they are going home,” Howell continued.

The ceremonial ringing of the bell was followed by a moment of silence, then the sound of bagpipes, and ended with a prayer led by Highland Park Fire Chaplain Scott Ferguson.