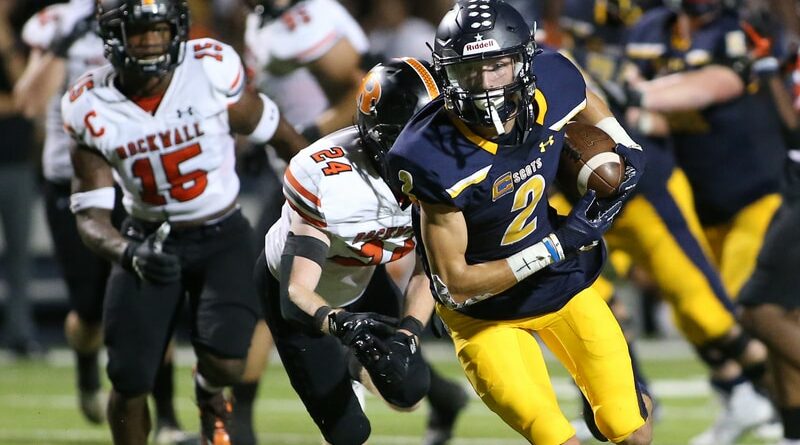 It’s not often that Highland Park is the team trying to slow the tempo and milk the clock, but that was the strategy on Friday against Rockwall. Try to keep the Yellowjackets off the field as much as possible.

Using a combination of stellar second-half defense, timely momentum shifts, and some offensive efficiency of their own, the Scots rallied for a 52-31 nondistrict victory on Friday at Highlander Stadium.

By controlling time of possession, the HP defense looked fresh in the second half. They limited a Rockwall offense that averaged 58.7 points per game to just seven after halftime.

Meanwhile, the Scots (3-1) reached the end zone on all four of their second-half drives. They also showcased their depth in the running game, with four ball carriers splitting attempts almost equally to help move the chains consistently.

“Their game is to play up-tempo and wear your defense down, so in the fourth quarter, you’re just worn out,” said HP head coach Randy Allen. “So we wanted to eat clock and score and stay close, and you have to get a turnover or a stop here or there. And we got both of them. Our guys just kept fighting and apparently we wore them down.”

Christian Reeves ran for 114 yards and a touchdown, and John Rutledge scored twice — including a momentum-shifting scamper to the end zone on a second-quarter kickoff return.

Meanwhile, junior quarterback Brennan Storer shined in his fourth career start. After an early miscue, he finished 17-of-20 passing for 227 yards and three scores while also rushing for a touchdown.

“Every game, he gets better. When you can come back from adversity and play a great game, which he did, that’s a big step,” Allen said. “After he threw the interception, he came right back and had a great drive to lead us to a score.”

The Scots outscored Rockwall 38-7 after the midway point of the second quarter as they defeated the Jackets (3-1) for the fourth time in the past five seasons.

HP secured its third straight win — all against Class 6A opponents — heading into a bye week followed by the District 7-5A Division I opener on Oct. 1 at Sherman.

“We’re developing some chemistry and some confidence in each other going into district. In four weeks, we’ve made a lot of progress,” Allen said. “The bye week comes at a good time. We can get healthy and work on some fundamentals.”

Storer outplayed Rockwall’s Braedyn Locke, a three-year starter who is verbally committed to Mississippi State. Locke was 16-of-24 for 133 yards and a touchdown.

Zach Hernandez was the offensive standout for the Jackets with a game-high 163 rushing yards on 19 carries and a first-quarter score.

Rockwall took a 21-7 lead early in the second quarter when Cadien Robinson picked off a screen pass deep in HP territory and took it to the end zone.

However, Rutledge returned the ensuing kickoff 89 yards for a touchdown, enabling HP to remain within striking distance.

From there, the Scots gradually took command. A 40-yard touchdown pass from Storer to Jackson Heis, followed by a Jack Stone field goal, tied the game at 24 at the break.

The Scots took their first lead on an 8-yard Storer scoring run to open the third quarter. Rockwall struck back quickly on Locke’s only touchdown throw of the game, covering 21 yards to Caden Marshall.

HP’s next drive might have been its most impressive, covering 75 yards in 11 plays. It ended with a 29-yard scoring strike from Storer to Rutledge on fourth-and-11.

The HP defense preserved the advantage by forcing two turnovers in the fourth quarter. Blake Bevans intercepted a tipped pass at the Rockwall 24-yard line with 5:05 remaining, and Harrison Walton pounced on a fumble in the closing seconds.

“All you can do against that great offense is play hard and hope you’re in the right place at the right time — stop them from making big plays.” Allen said. “We didn’t give up many pass plays and we did a good job of tackling.”

Ben Croasdale ran 11 times for 47 yards and an early touchdown for HP, tying him with Rutledge for the team lead in touchdowns this season with four. Luke Herring added a scoring reception midway through the fourth quarter to provide a cushion.