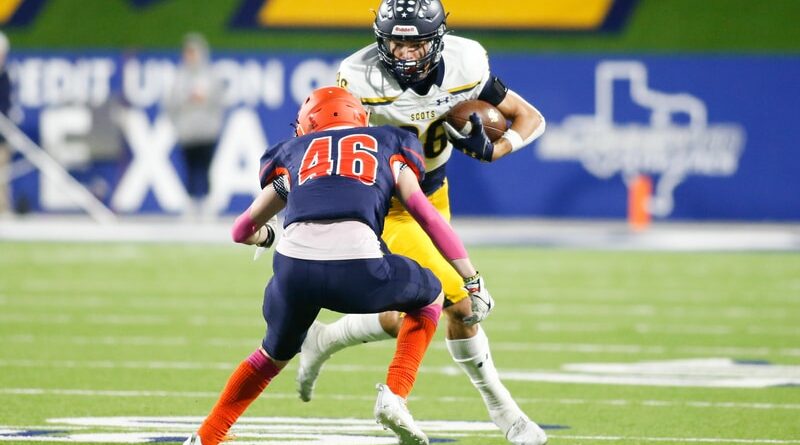 McKINNEY — After a string of seesaw tussles and close calls, Highland Park could breathe a little easier on Friday.

The Scots parlayed a fast start into their first blowout victory of the season, rolling past McKinney North 59-24 at McKinney ISD Stadium.

HP extended its winning streak to six games with a season-high total in points. Brennan Storer passed for 272 yards and career-high five touchdowns, and the Scots (6-1, 3-0) reached the end zone on eight of their first nine possessions.

“It was a great game for our offense,” said HP head coach Randy Allen. “We’ve been looking for a game in which we completed a high percentage of our passes, broke some tackles, and made some long runs, and we had that.”

HP will return home next week for a showdown against Tyler, with the winner claiming sole possession of first place in District 7-5A Div. I.

On Friday, four touchdowns in the first eight minutes enabled HP to take an early 28-0 lead, and the Bulldogs (3-5, 2-2) never threatened.

The early barrage came via a combination of big plays and McKinney North miscues. HP’s Christian Reeves capped an impressive opening drive with the first of his two rushing touchdowns from seven yards out.

Seconds later, HP defensive back J.T. Withers recovered a fumble on McKinney North’s first offensive snap. Storer connected with Luke Herring on a 29-yard scoring strike on the next play.

After a McKinney North punt, the Scots quickly drove 79 yards, ending with a Storer touchdown toss to John Rutledge. A personal foul on the play gave HP extra 15 yards on the ensuing kickoff, and kicker Jack Stone recovered an onside dribbler to retain possession.

Just two plays later, Storer found Jackson Heis on a 27-yard score. Storer was 15-of-20 for 241 yards in the first half.

“We had some success throwing the ball vertically,” Allen said. “We’ve got some good receivers and Brennan was hot.”

Early in the second quarter, Ben Croasdale’s 88-yard kickoff return gave the Scots excellent field position, and Reeves capitalized with a 5-yard touchdown plunge to stretch the margin to 35-3.

Storer spread the ball around to more than a half-dozen receivers. Herring and Rutledge caught two scoring passes apiece, while Heis finished with a team-high 90 receiving yards.

Jadan Smith rushed for 116 yards and two touchdowns to lead the Bulldogs. The second of those scores came after defensive end Dylan Frazier intercepted a tipped pass near midfield in the second quarter.

McKinney North quarterback Colin Hitchcock, filling in for injured starter Gavin Constantine, was a solid 22-of-28 passing for 248 yards, including a scoring pass to Kyler Moore. Korbin Hendrix caught 12 passes for a game-high 120 yards.

The Scots remained unbeaten in seven meetings all-time against the Bulldogs, with an average scoring output of 51.7 points and an average margin of victory of 36.6 points.