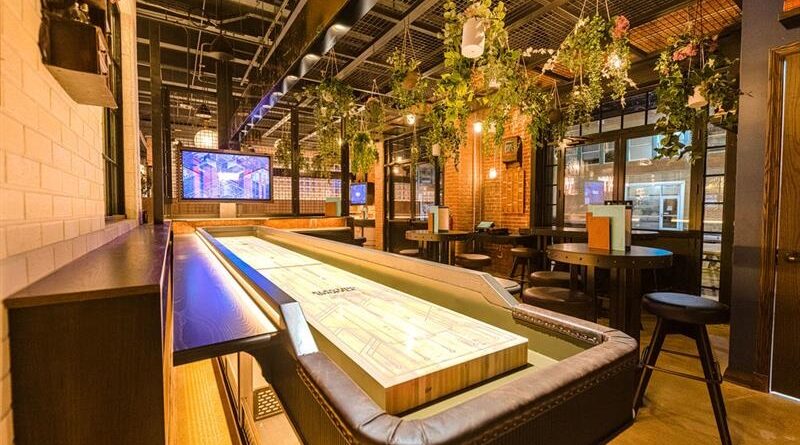 Electric Shuffle, the London export restaurant, bar, and shuffleboard playhouse opens today in Deep Ellum. This is the first Electric Shuffle to open outside of the United Kingdom and the culmination of a pre-pandemic plan by Electric Shuffle U.S. to bring the social entertainment concept to the states.

Electric Shuffle is a basilica of fun in a beautifully restored nearly 100-year-old Deep Ellum building located at 2615 Elm Street which was built in 1924 as a residence, but has also housed a furniture store, a meatpacking plant, and a business called U.S. Junk Co. Electric Shuffle could not have chosen a better venue for this concept, which feels very old world on the exterior but is finished inside with elegant, modern furnishings and décor and 17 15-foot shuffleboard tables placed in cozy corners and vignettes designed for guests to eat, drink and, of course, play and watch shuffleboard.

Nowadays, shuffleboard seems to be an afterthought, a fixture in the back of an icehouse or bar, underused except for maybe a place to leave your longneck while you use the facilities. The history of the game is much more dignified, its history dating back to the 15th Century, during the reign of King Henry V when early iterations of the game were played by fancy people who used their coins as pucks. The Electric Shuffle team claims it’s on a mission to save shuffleboard from the back of the bar, almost redefining it through technology that infuses the 21st century into the game.

The vision technology, designed by an actual rocket scientist, allows for automatic team building, scoring, player rotations, and three different shuffleboard games. The shuffleboard bases are made in Northern Ireland and the beautiful laminated wooden playing surfaces come from California. Both are made the old-fashioned way, not with technology in the board or pucks – the technology comes from the “eye” above the table that tracks movement and scoring.

The thoughtfully designed play areas allow for up to 20 people to gather ‘round the table, eating, drinking, and playing. It’s a fun way to interact with your group and new friends you bond with while playing or watching others play. It reminds me of a group around a craps table.

As entertaining as all that is, food and beverage is a priority at Electric Shuffle. The menu is mostly filled with shareable items, small plates, platters, pizza, and fries, but has burgers, sandwiches, and salads as well for individuals who prefer to have their own. Fun desserts include cake pops and an ice cream sandwich. The beverage program includes craft cocktails and premium wine and beer.

Sunday brunch here is extra fun, with a package that includes a full bottle of sparkling wine, juice, and a spread including bacon jam breakfast pizza, mini chicken and waffles, avocado toast, and one hour of shuffleboard playing time all for only $50 per person, $35 per person without the bubbles.

So, how does it all work? Guests arrive on the main floor of the building and check in with the host. When your table is ready, you’ll be guided by an Electric Shuffle employee on the technology and how to set up your game control center which is easy and intuitive. Order food and drinks and start playing – that’s it. Shuffleboard costs $15 per person for 90 minutes at a table but there is plenty of seating around the venue to enjoy the music and energy here even if you’re not playing shuffleboard.

Dallas is a great city and all, but how did it get so lucky to claim the first Electric Shuffle outside of the U.K.?  Gene Ball, CEO of Electric Shuffle US, came to Dallas to work for Top Golf , but the company says it chose Dallas not because Gene lives here, rather because they wanted to do something slightly unexpected. “A lot of brands launch in New York or Chicago,” a company rep told me, “But we wanted to do things differently where we believe we can bring something really special to the neighborhood. We love the vibe and community spirit in Deep Ellum. It has real synergies with our first UK site in London’s Shoreditch, so we feel at home here. We want to add something truly unique to each community and are confident we can do that.”

Electric Shuffle is open Sunday through Thursday 11 a.m. to midnight and 11 until 2 a.m. Friday and Saturday. Private rooms are available for parties. Happy Hours, specials, and a wonderful collaboration with The Birthday Party Project is explained in detail on the website. Reservations are strongly encouraged as is following them on Instagram so you can be “in the know.” www.electricshuffleusa.com. 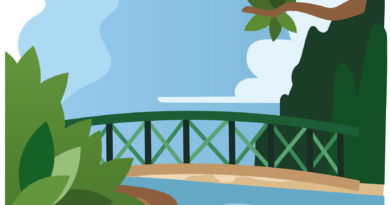 Oh My GOSH – Scavenger Hunting Returning For the Summer 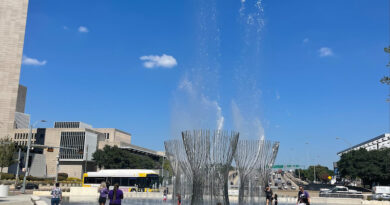 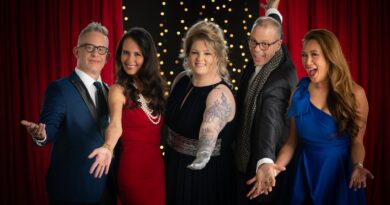 Fun Facts for Friday! Fall Food Festivals for You!