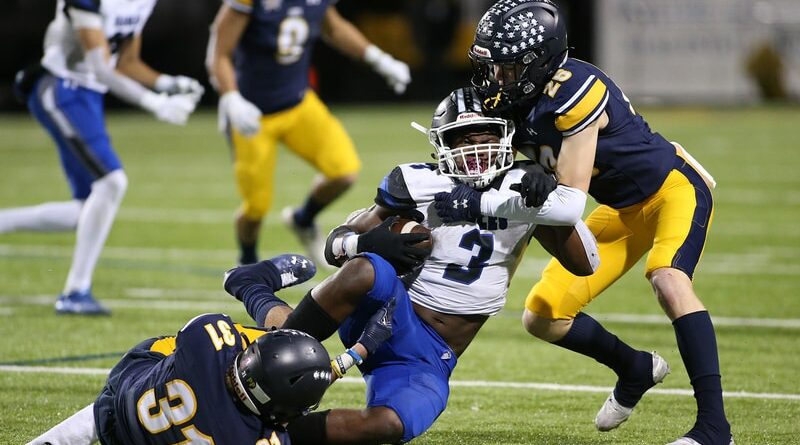 The Highland Park defense will look to shut down Frisco Wakeland in the area round of the playoffs. (PHOTO: Chris McGathey)
Park Cities Sports
November 19, 2021November 19, 2021 Todd Jorgenson 0 Comments

In the past five years, Highland Park has eliminated five Frisco ISD teams from the Class 5A Division I football playoffs.

The Scots hope to make Frisco Wakeland the next victim on Friday in a Region II area round clash at Eagle Stadium in Allen.

The Scots (10-1) extended their winning streak to 10 games with a dominating 45-13 victory over New Caney last week. HP earned a first-round win for the ninth consecutive year, and will now look to extend its string of regional quarterfinal appearances to six.

The Wolverines (8-2) cruised to a 38-7 triumph over Woodrow Wilson in the bi-district round for their seventh victory this season by a margin of at least 28 points. They have made the playoffs in eight straight years but have advanced past the first round just twice.

HP started its 2019 postseason run with a 33-10 win over the Wolverines before falling to Frisco Lone Star two weeks later. Last season, the Scots knocked off Frisco Independence and Lone Star in consecutive weeks.

None of that means much for this week’s rematch, however. HP has found its stride on offense by scoring at least 38 points in five straight games. A balanced ground game has been a primary catalyst, as the Scots have scored 21 rushing touchdowns over that span.

Meanwhile, junior quarterback Brennan Storer has thrown for 2,251 yards and 25 scores, nine of which have gone to top target John Rutledge.

Wakeland is led by Jared White, the standout running back who finished with 248 yards and three touchdowns last week. He has more than 1,700 yards and 24 scores in 10 games.

Sophomore quarterback Brennan Myer has thrown for more than 1,500 yards and 17 touchdowns for a Wakeland offense that has averaged 40 points per game this season. The Wolverines have allowed just 13.8 points on defense, compared to 22.3 for HP.

The winner of Friday’s clash will face either Lone Star (9-2) or College Station (11-0) in the Region II quarterfinals next week.