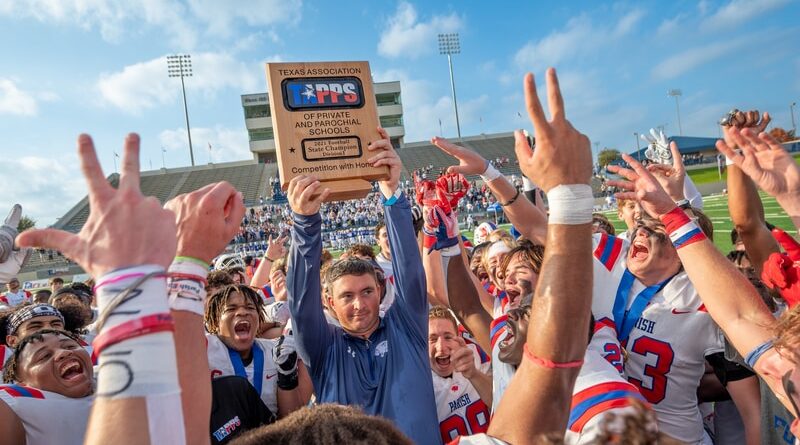 WACO — Parish Episcopal is no stranger to playing in big games, having played and won the last two TAPPS Division I state championship games in thrilling fashion.

Much like the last two years, the Panthers racked up big plays on both sides of scrimmage in a 56-17 victory over Midland Christian to complete a third straight title run at Waco ISD Stadium.

Andrew Paul rushed for 338 yards and four touchdowns, pacing an offense that reached the end zone on all seven of its possessions.

“We had an answer every time that Midland Christian pushed us, and that answer was Andrew Paul,” said Parish head coach Daniel Novakov. “He had a tremendous game and our guys just seemed to get better and better as the game went on.”

The only thing that didn’t go Parish’s way was the opening coin toss. But even that turned in the Panthers’ favor thanks to their defense. On that opening series, Parish’s Daniel Demery recovered a fumble and returned it 39 yards for a touchdown.

“The defense did a great job putting pressure on the runner and knocking out the ball,” said Demery, who also had an interception in the second half. “Once I got the ball, I just took off for the end zone and I knew we were going to win.”

Midland Christian rallied with a 15-play scoring drive to take a 7-6 lead, but Paul helped Parish reclaim the advantage at 14-7 with a 19-yard scoring run and a two-point conversion run.

Paul’s electric 81-yard touchdown scamper on the opening play of the second quarter was one of his nine runs of 10 yards or more in the contest. Paul later added a 26-yard scoring run on Parish’s final first-half possession for a 28-10 halftime lead.

“Everything was going our way in the first half, but we knew we needed to stay focused in the second half,” Novakov said.

The Panthers (12-1) ensured there would be no late comeback to deny them victory in the second half, with Paul scoring on a 67-yard run for a 35-10 lead just a minute into the third quarter.

Freshman quarterback Sawyer Anderson threw a touchdown pass to Blake Youngblood (who is verbally committed to Holy Cross) and another to Cedric Mays in the second half.

The Mustangs (10-3) scratched back for a touchdown early in the final quarter, but Parish had the final say on its last drive with a 6-yard scoring run by Mays.

The last touchdown not only capped an amazing season for the Panthers, but also a remarkable run of success by a senior class that has seen the last three years end with state titles.

“This was the type of game you want to have to close out your senior year,” Paul said. “This is such an amazing feeling to be a part of three state champions. This team accomplished so much this year.”